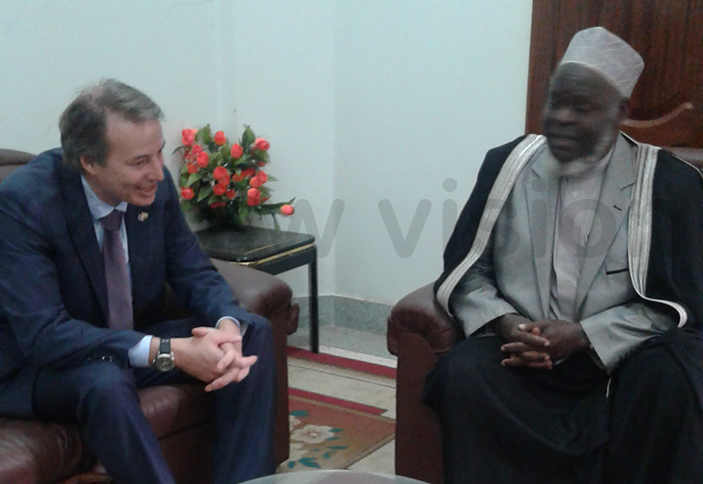 The Mufti of Uganda Sheikh Shaban Mubajje has held talks with the European Union Head of Delegation to Uganda, Kristian Schmidt.

The duo discussed issues of Islamic Banking, job creation for the Muslim youths and the impending refugee crisis in Northern Uganda also came up in the meeting.

Schmidt had paid the Mufti a courtesy call.

The Mufti made a case for Islamic Banking, saying it would help Ugandans particularly the Muslim youth to access interest free loans.

In January this year Parliament amended the Financial Institutions Act and introduced Islamic Banking a system of banking, which is consistent with Islamic Shari'ah (law) and guided by Islamic economics.

The parliamentary clearance is, however, subject to the establishment of a Central Shari'ah Advisory Board in the Central Bank to regulate banks providing Islamic banking products.

President Museveni has been advocating for Islamic banking model, also known as Halal banking—where instead of a bank imposing interest, it shares the profit it accrues with the clients.

Mubajje said one of the reasons why youths had been radicalised was redundancy.

The meeting also saw the duo discussing a range of issues pertaining to the relations between Uganda and the European Union.

The statement said they particularly discussed the recently concluded elections and recent peaceful and successful mission carried out by the religious leaders and the Uganda Elders Forum in Rwenzori sub-region region.

The Mufti appealed to political leaders at every level to make peace, love it and keep it. He also told the envoy that Islam is a religion of peace and noted that whoever entwines it with terrorism is wrong.

Schmidt later handed over an elections report to Mubajje. The report contains the views of the European Union observer team regarding the recently concluded elections.