The committee was established on eight terms of reference

The committee was established on eight terms of reference

Prof. John Ddumba Ssentamu the Vice Chancellor Makerere University has named an eight member committee to investigate the standoff between Dr. Stella Nyanzi a research fellow at its institute of social research (MISR) and the Director Prof. Mahmood Mamdani.

Unveiled on Wednesday in a statement circulated on the university's webmail, the committee will be headed by David Justus Bakibinga, a professor of commercial law at the school of law.

Members of the committee include Prof. Joseph Y.T Mugisha of Biomathematics, Associate Prof. Julius Kikooma the dean school of Psychology, Associate Prof. Christopher Mbazira, the coordinator of the public interest law clinic at the school of law.

Others are Dr. Josephine Ahikire, the dean school of women and gender studies, Naomi kiconco a legal officer in the university's legal chambers, Henry Nsubuga, the manager of counseling and guidance center and Mary Tizikara, the director of Human resources.

According to the circular, the committee was established on eight terms of reference, which include establishing the cause of the dramatic events that took place at the institute on Monday April 18, investigating the genesis of the disagreement between Prof. Mamdani and Dr. Nyanzi.

It is also required to establish the extent to which Prof. Mamdani and Dr. Nyanzi are disrupting each other's mandate, evaluate the extend of the misunderstanding, ascertain the working conditions at MISR, reporting structure and assignment of duties to staff members. 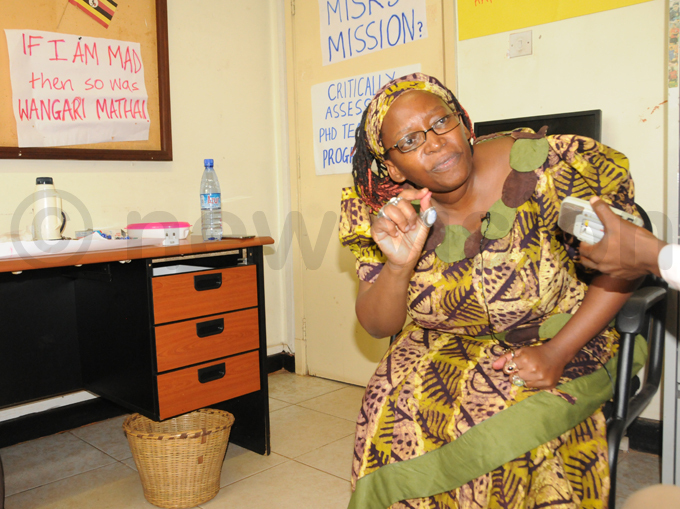 The committee which is expected to submit a report to the Vice Chancellor by Friday this week is also expected to establish the assets at MISR and provide a list of its employees.

This follows an incident in which Dr. Nyanzi put up a nude protest against Prof. Mamdani's decision to lock her out of her office on Monday.

In the circular, Prof. Ddumba said that prior to the incident, the Deputy Vice Chancellor in charge of finance and administration had written to Prof. Mamdani to stay the planned eviction until an amicable solution was found.

However, Prof. Mamdani rejected the stay of eviction, saying that Dr. Nyanzi can only be given an office, if she agrees to participate in the PhD programme.

Prof. Mamdani who is also the holder of the Herbert Lehman endowed chair at the University of Columbia had earlier said in press statement that MISR would not cooperate with the committee set by the vice chancellor.

Mamdani said Prof. Ddumba lacks the moral authority and objectivity to set up and provide oversight for such a Committee, due to his close family relationship with Nyanzi.

"He is partisan and has a clear conflict of interest. The VC should exclude himself from the process. This would allow the Committee to conduct its work in an impartial manner as well as to look into the VC's own conduct," he said.

He also suggested that Nyanzi be sent on a one month leave with the understanding that she will not return to the institution for any reason.