“Once in a while crocodiles and hippos are seen in the water,” says the current Backpackers manager.

“Once in a while crocodiles and hippos are seen in the water,” says the current Backpackers manager.

The walls of Dominic's castle are rugged and bare rocks. This is blended with a staircase that is guarded by a tree branch improvisation.

Conjuring thoughts of sculptor having chiseled it into intricate curves and texture, it is evident that the developer picked the wood out of the forest and put it there after polish.

As if that was not enough, the solar-powered bulbs are cased in used plastic bottles. This is an eco-friendly gesture on a small Banda Island in Kalangala. It is endowed with wide windows which enriches it with lots of natural light.

The dining table is a fabrication of a flat board and benches with a capacity to contain 20 people. On the third floor, one sees the blue Lake Victoria waters.

The kitchen is equipped with efficient energy-saving stoves. Being shaded by a canopy of trees and climbing plants keeps the stony house air-conditioned throughout the day.

The compound is busy with reptiles, birds, monkeys and butterflies reclaiming their habitat. It commands a panoramic view of the sun setting and the sky hugging the waters. 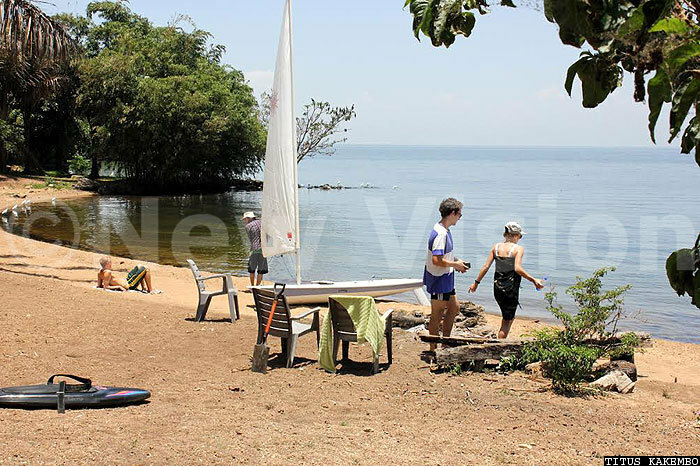 "Once in a while crocodiles and hippos are seen in the water," says the current Backpackers manager Ssebo Andrew. "It is living to Dominic's dream of being an eco-friendly homestead."

"The portion of land is roughly 1,600m by 8,00m. Oral literature has it that Dominic lived there for 15 years, after a life of "blowing up rocks" (mineral mining).  The legendary Briton had earlier settled in Kenya before coming to Kalangala as a tourist, eventually falling in love with the place.

"He lived there for the initial nine years. He surprised onlookers by doing his own cooking and cleaning. Then, he started the backpackers' camp. The money got was then used to buy cement for building walls with island stones."

"Dominic mysteriously used the rocks he collected on the island to make the walls of his dream castle," recounts the district environmentalist, Maurice Bafirawala. "He broke the Kalangala tradition of building wooden homes by using stones or mud and wattle. The structures are durable and self-contained." 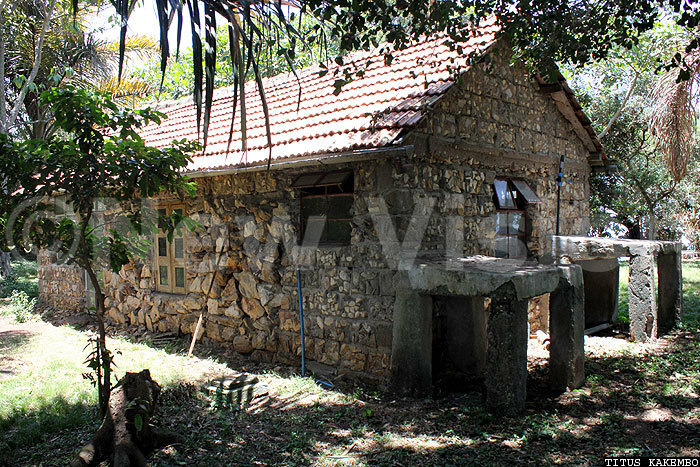 Creativity at its best at Dominic's Castle. Pictured here is the kitchen

"He saved a lot of cash by not having to ship fired bricks, cement and limestone from the mainland," adds Bafirawala.

"He creatively exploited everything in his reach to make his castle habitable. The rain water is still harvested and stored in the tanks."

An elder, Gerepasio Lubina, who is in his 90s, also recalls with nostalgia how Dominic and some laborers "chopped the rocks into brick shapes using metal blades and slowly the house took an elegant shape which was different from the conventional house in Kalangala. All he shopped for were nails, pipes for water connection and iron sheets."

"I saw a miracle unfolding before my very own eyes as Dominic used pieces of timber that we would have used as firewood to develop his property.

"The walls have not got a definite color scheme. The only items he bought from the mainland were the iron sheets and pipes for connecting water to the kitchen and the bathroom," recounts Lubina.

"You can see the pipes when you climb up on the rooftop where bird watchers sit with binoculars." After Dominic's death, the Dominic's castle has been transformed into a lodging facility, housing campers from South Africa, the EU and USA for $10 (about sh33,000) in a tent.

The oar-driven and motor boats shuttle guests to the mainland. The finished product is natural stone walls wearing an air of being unfinished. Some parts look like those old English ruins in Elizabethan literature.

There is lush rainforest vegetation. Standing out is his own three-storeyed place - there is no better word for the grand piece but a castle. Its ground floor (small stones covered with some planks to reach the stairs) uninhabited, but the second floor features some private possessions and the third his bedroom.

From this third floor, diehards can climb a steep metal stairs to his roof platform overlooking all trees to this East and South bay on the peninsula between which the castle is built.

"We love it here because of the fresh air and closeness to nature," says Gordon Eliot from Australia.

"As you ride on a ferry sailing around the 84 Sese islands, you cannot miss seeing this castle." The tame dogs bark at passing vessels and the birds take to flight when engines rev on the island. 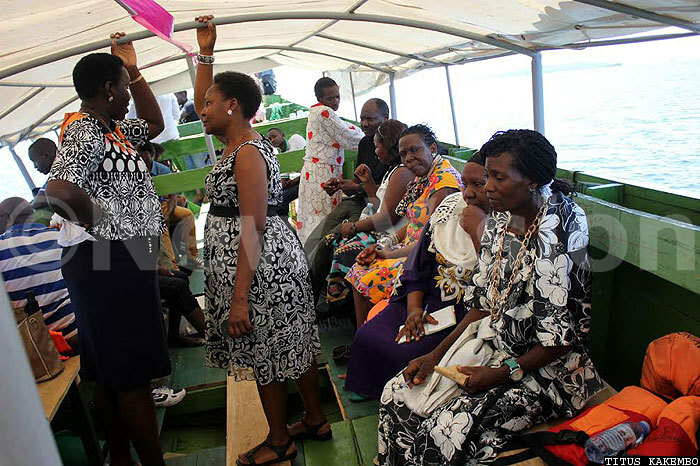 Privacy and warm water are guareented in the Bamboo showers. On the left is a water boiler 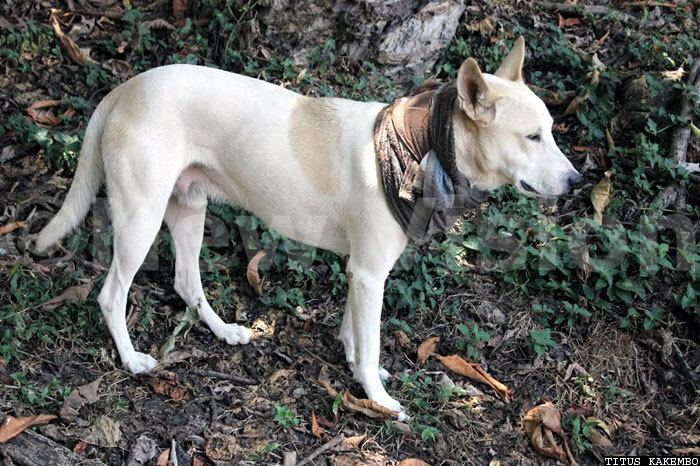 The resident canine is always happy to see visitors