The system, which will be rolled out in the next financial year, is already operational in Western Europe and North America.

The system, which will be rolled out in the next financial year, is already operational in Western Europe and North America.

In a few months, in Luwero Health Centre IV, patients' medical records will be available at the click of a mouse. This follows the piloting of a programme to issue patient auto health cards.

The taskforce, which was launched at Kasana - Luwero Diocese pastoral centre, will liaise with the Luwero Health Centre IV management committee headed by Eriyasafu Kayizzi Kitaka.

Explaining the new initiative, Dr Agaba who is also the in-charge Luwero Health Centre IV, says: "Comparable to a card used to withdraw money from automated teller machines, the patient auto health card will help medical workers to access a patient's medical records in an instant through the use of computers. The patient auto health card will have the medical history of the patient from the time when he/she was initially immunised. This will reduce the time a patient has to interface with doctors hence improving the quality of health care."

He says the system, which will be rolled out in the next financial year, is already operational in Western Europe and North America.

Dr Agaba told task force members that one of the great challenges they face in ensuring better health service delivery in Katikamu are inadequate funding and lack of adequate infrastructure and staff quarters. The others, he adds: "are lack of land titles where the health facilities are located and poor linkage between health workers and stakeholders".

"Lack of clear ownership and perimeter fences at health centres has resulted into some unscrupulous people grazing their cattle, sheep and goats and encroaching on land belonging to health centres. Luwero Health Centre IV is one example and I entreat all of you local politicians to follow up on the President's campaign pledge to turn Luwero Health Centre IV into a hospital," Dr. Agaba emphasised.

He also cautioned local leaders against expecting provision of certain medical services at a level where they should not be. "While some health centre IIs can help pregnant mothers to deliver, it is not their primary responsibility. Do not blame them if they do not do it because they are not adequately facilitated to ably deliver some type of medical services," Dr. Agaba stressed.

The Katikamu North MP also Minister without Portfolio, Abraham Byandala, promises that after the swearing-in ceremony, a committee of area local leaders will be set up to follow up the President's hospital pledge. 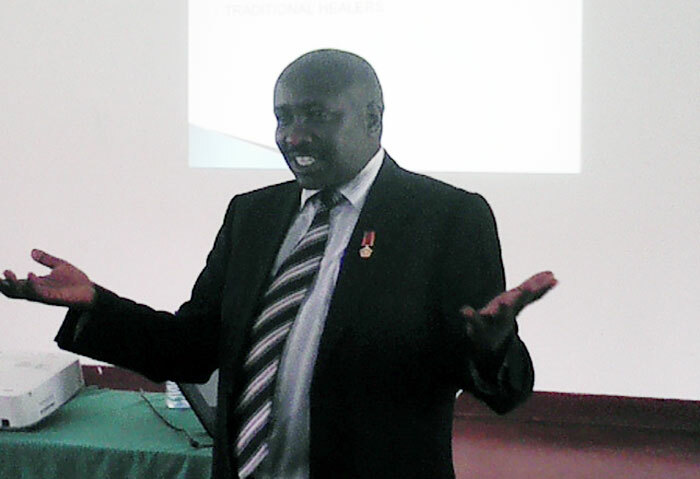 The incoming chairman of the Luwero Town Council, Paul Mukungu Ssenyonga says he has secured sh10m to have Luwero Health Centre IV land surveyed. On the other hand, the assistant chief administrative officer, Amos Kalema said the district technical leadership will team up with the health centre in-charges to ensure that all land belonging to health centres is surveyed and titled.

All these services all delivered on an annual budget of sh77m for medicines and supplies advanced on a quarterly basis and a non-wage recurrent budget of sh35,749,000.

Most of the patients interviewed admit that the service delivery at Luwero HC IV is good with the exception of the absence of drugs, which they say they drug shops.

Pastor Laban Ssemugenyi of Kyevunze village, Luwero sub-county however, wants the government and the health centre management to do more in ensuring better health service delivery. "I brought my three-year-old daughter at 8:00 am for treatment against malaria and after conducting a test that confirmed the disease at 3:00 pm, I was only given painkillers," Ssemugenyi says.

Located at Kasana town in Luwero district, about 55km on the Kampala-Gulu highway, Luwero Health Centre IV was built in 1940 on land that was donated by the Kabaka of Buganda, Sir Edward Muteesa II.