S.Sudan rebels in Juba as part of peace de...
Next Story

At the start of the tour around the expansive park, visitors get a feel of the native culture of the Li and Miao people through a live show.

At the start of the tour around the expansive park, visitors get a feel of the native culture of the Li and Miao people through a live show.

The Binglanggu (Betel nut Valley) Heritage Park is one of the top tourist attractions in Sanya City in China's southern province of Hainan.

Binlanggu  earns its name from the original local ethnic minority villages and the countless betel trees that extend several kilometers along the valley.

The park is situated in the Ganzaling nature preservation area between Sanya City and Baoting County, about 26 kilometres from Sanya City centre. 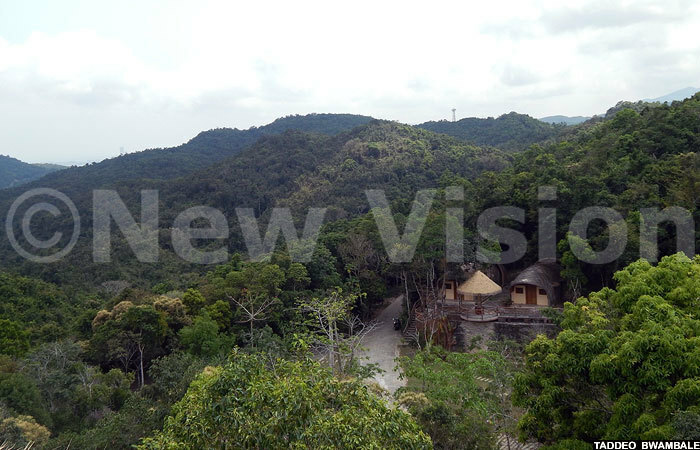 The mountains are home to wild animals that live alongside humans 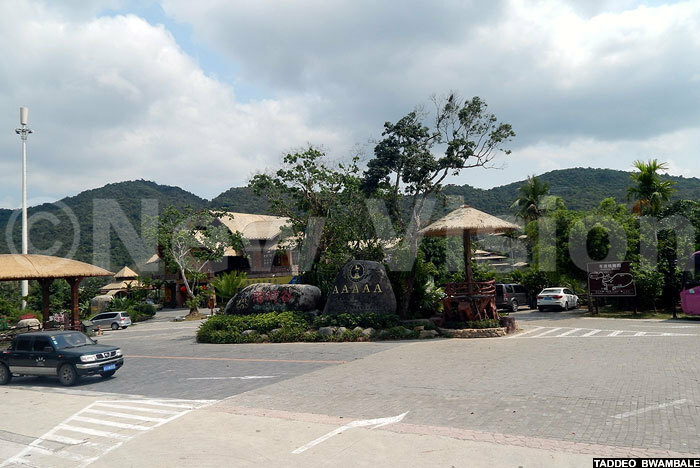 The iconic facility covers an area of about 333 hectares and gives visitors an insight into the ancient life of the Li and Miao ethnic communities and their vast intangible cultural heritage village.

At the start of the tour around the expansive park, visitors get a feel of the native culture of the Li and Miao people through a live show. Tasty betel nuts and snacks are a plenty around the park. 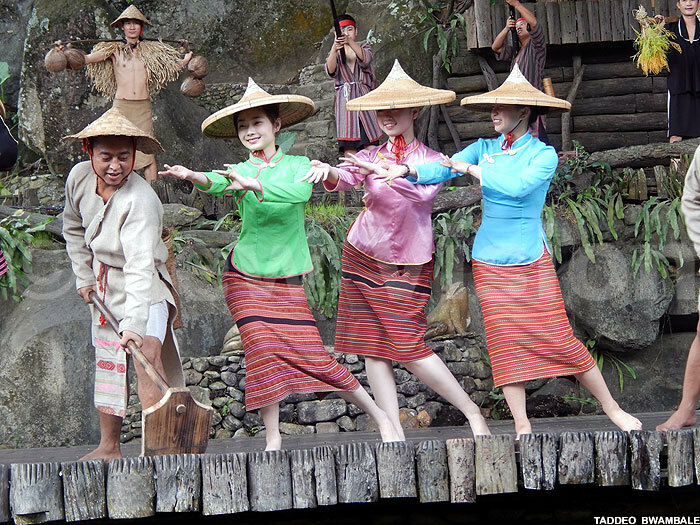 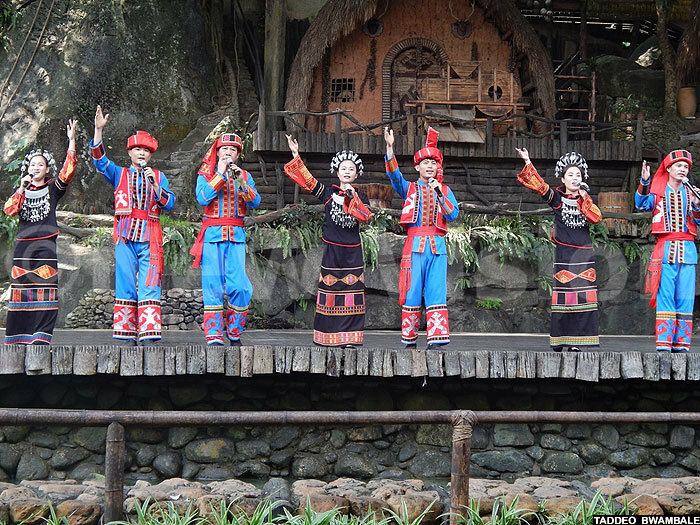 Against a backdrop of a beautiful tropical natural scenery, Binlanggu is a ‘museum' of rich ancient history, offering visitors a peek into a native way of life dating back more than 100 years.

Binlanggu is touted the ‘living fossil of Hainan ethnic culture' and was declared a national intangible cultural heritage centre by the Chinese government.

The traditional spinning, dyeing, weaving and embroidery technique of the Li ethnic group shown at the park is listed as intagible cultural heritage in need of urgent safeguarding by the United Nations Educational, Scientific and Cultural Organization (UNESCO).

Built in 1998, Binlanggu is a tourism destination devoted to the protection and promotion of the ancient ethnic culture of the Li people.

Spread across the park are preserved aboriginal huts depicting the simple lifestyle of the Li and Miao people, next to a culture museum exhibiting cloth, artwork and artifacts of the people. 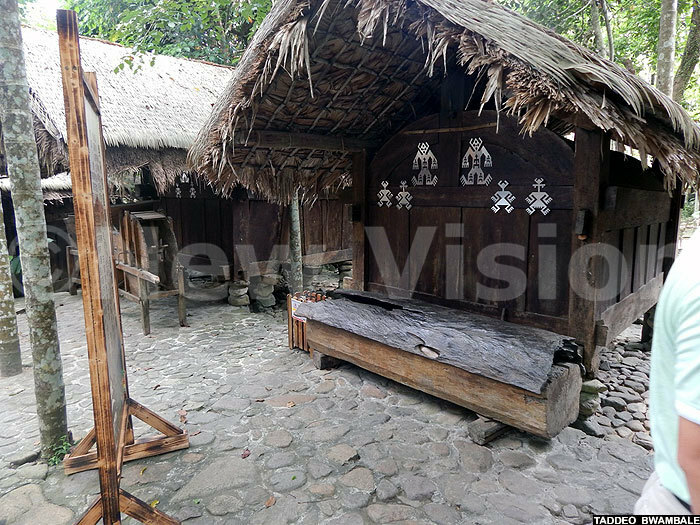 The way of life is akin to ancient African way of life. A tour around the park will bring you close to the hall of honour, a totem museum and a vast exhibition hall of intangible cultural heritage.

It is feared that the embroidered surface tatoo procedure of the Li ethnic group, exhibited inside the museum, will be extinct in ten years.

How did the Li and Miao people make wine from rice and corn? Visitors get a taste of wine and whisky made using the grains through an ancient fermentation technique. 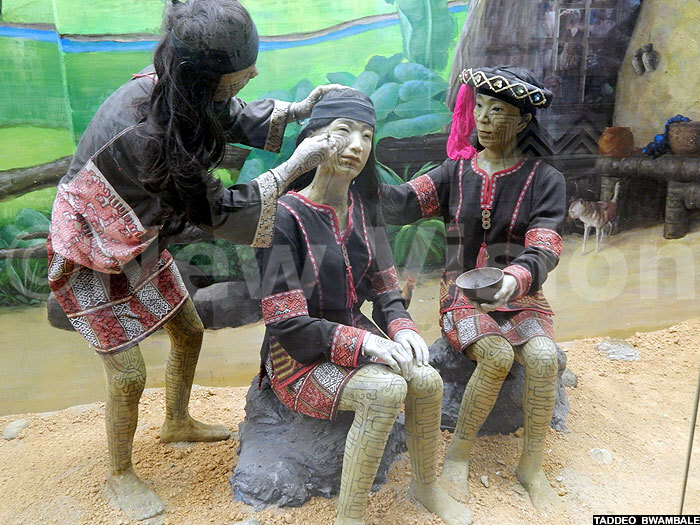 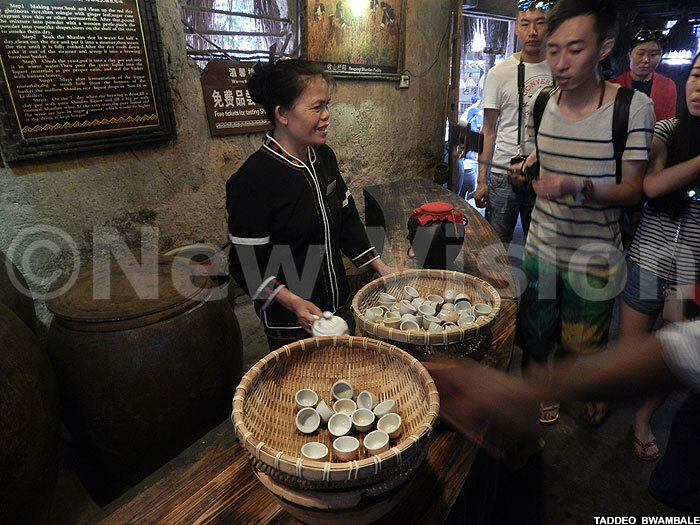 Around the park lies the largest dragon quilt and collection of non-woven cloth made from bark cloth, a technique similar to one used in Uganda's own Buganda Kingdom.

One of the sculptures inside the museum depicts Huang Daopol (1245-1330), a cotton textile expert in the Yuan Dynasty from Songjiang prefecture (present Xuhui district in Shanghai). 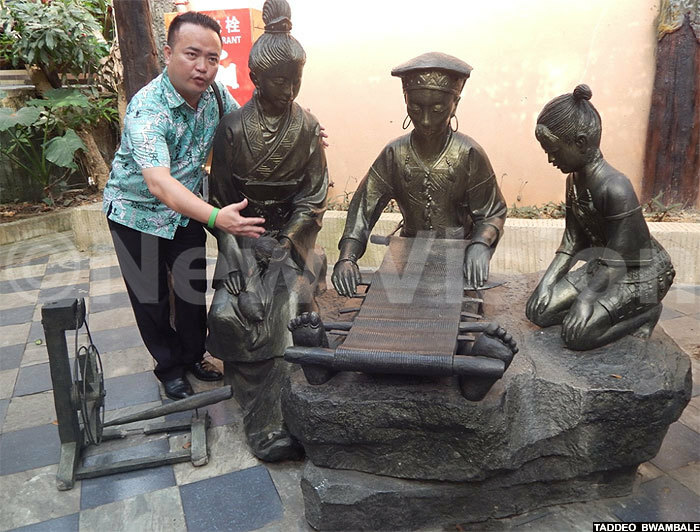 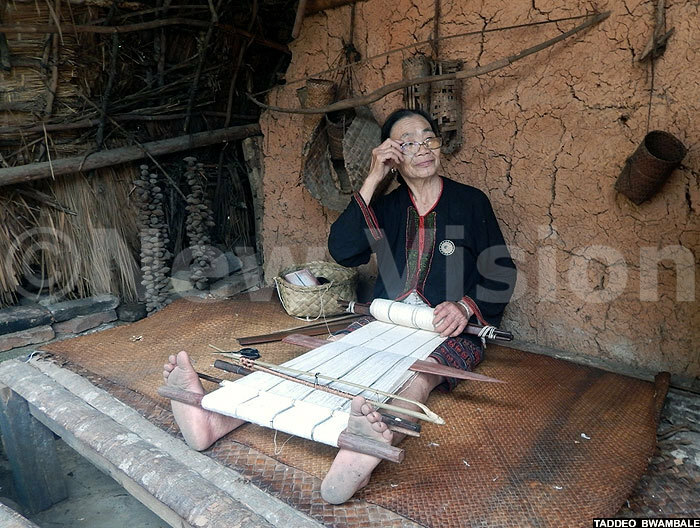 She learnt and mastered the art of spinning and weaving from the Li minority ethnic group and was later credited for her contribution to China's textile industry at the time.

Meanwhile, Binlanggu is one of China's top ten filming locations in China. Its beautiful landscape has been a popular filming location for movies, TV series and reality shows. 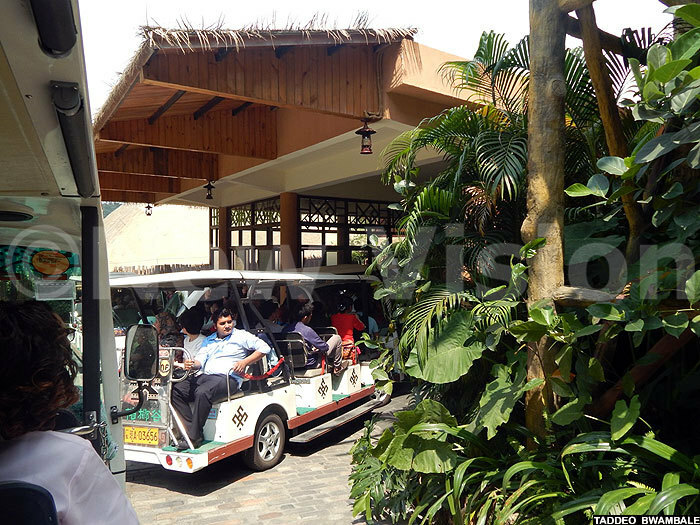 Visitors move around the park in carts

Ancient baskets, pots and stools on display inside a museum 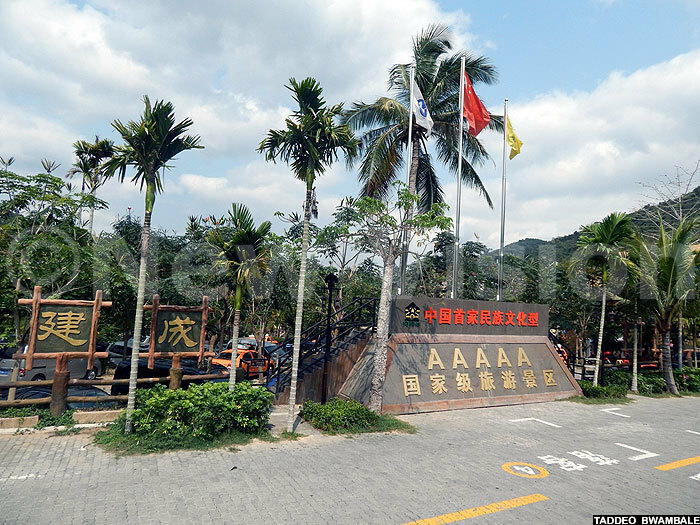 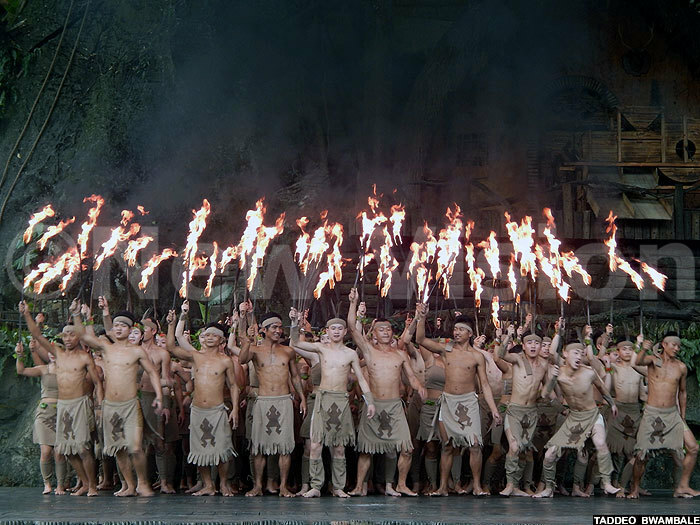 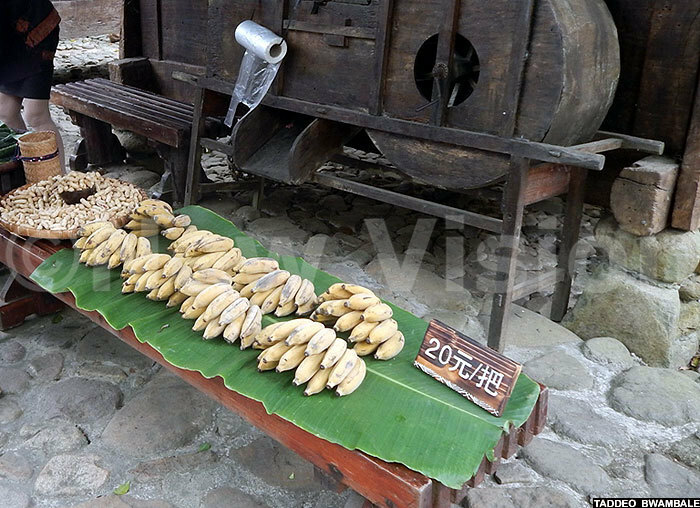 Groundnuts and bananas on sale 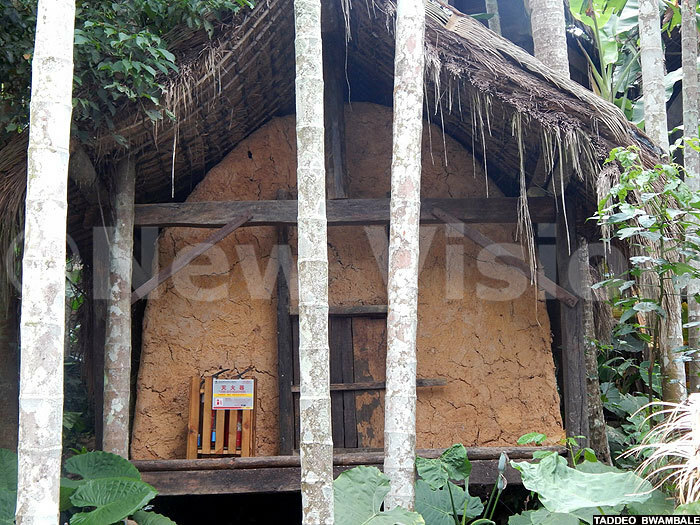 This granary has been preserved for more than 100 years 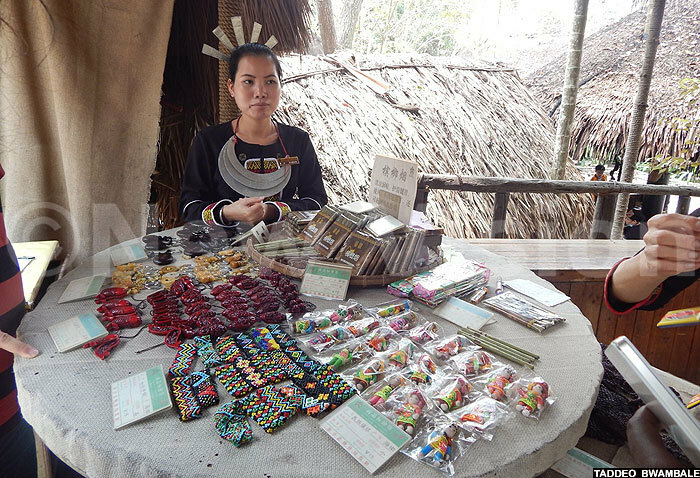 Ornaments based on ancient culture 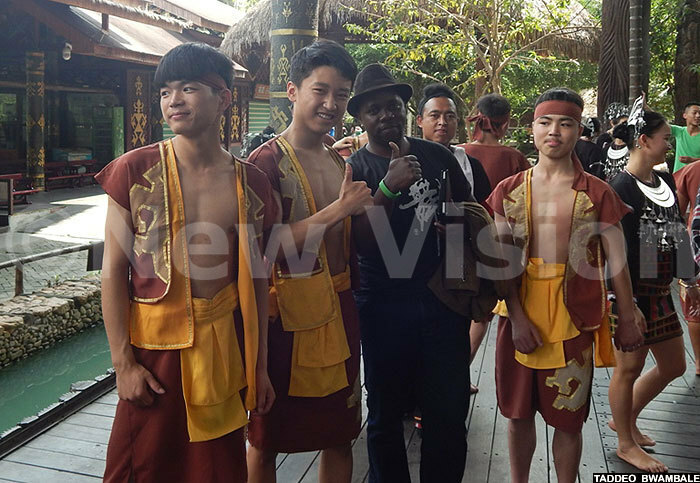 The writer blending in. Here, he flashes the thumbs-up sign, which is a form of greeting in the area 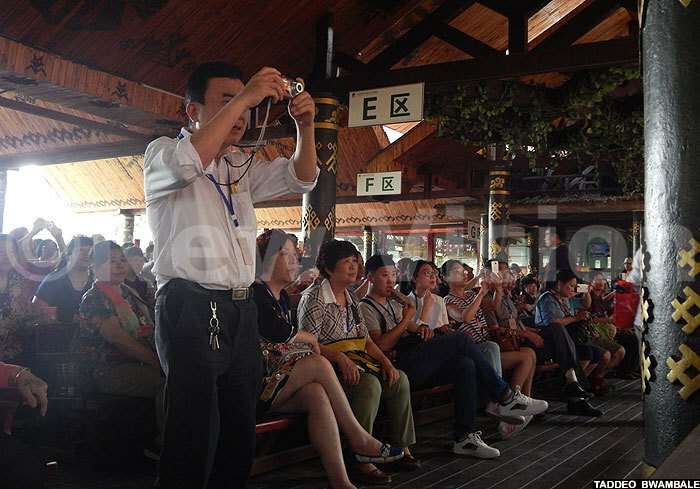 Tourists hooked onto the show 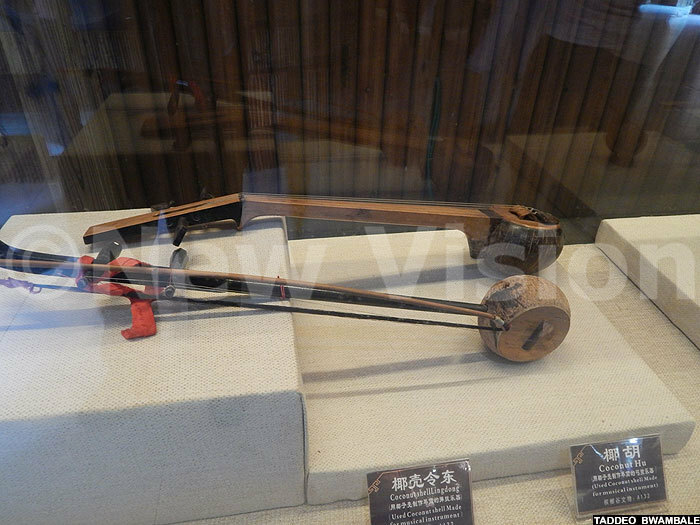