MENU
Only 2 latrines for over 400 Bugala residents
Previous Story

UNRA conducts interviews for over 1000 applicants

Only about 1800 applicants for various UNRA jobs made it past the first hurdle.

The Uganda National Roads Authority (UNRA) has named the Uganda Bureau of Statistics (UBOS) offices on Sixth Street in Industrial Area as the venue for job interviews.

The venue is contained in the second released list of 1,097 shortlisted applicants for the various jobs that the roads body advertised in January. This brings the total number of shortlisted candidates to about 1,800.

At the selected venue, the shortlisted candidates were expected to sit for aptitude and competence tests between 8:00am and 2:00pm, according to a document on the UNRA website.

Like it was the case with the first shortlist, names of the applicants who have been shortlisted have been published on the UNRA website.

"UNRA would like to inform the general public that the shortlisting exercise commenced and the shortlists are being released in phases," UNRA said in a statement. 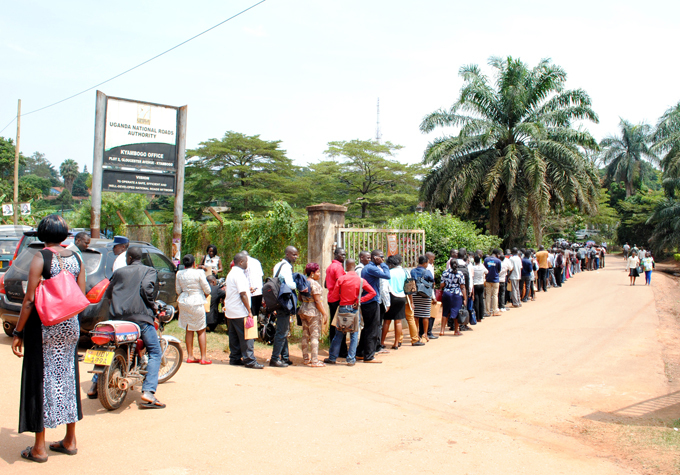 The first shortlist had the post of ‘Land Acquisition Officer' with the highest number of shortlisted applicants standing at 150 candidates. It was followed by the posts of; ferry engineer and mechanic, with each having 69 applicants shortlisted.

UNRA noted that shortlisted candidates would be subjected to an aptitude and competence test whose dates and time would be communicated later to each of the candidate's personal contacts (phones and e-mails) as presented to the roads body at the time of application.

In the recently released cencus report, 58% of Ugandans were found to be unemployed for reasons other than pursuing studies.

The report indicated that majority of those unemployed are women with 65.2% (over 11m) of them 'redundant.'

Any form of lobbying by shortlisted candidates, the roads authority warned, would lead to automatic disqualification, adding that, "UNRA does not charge any money for any service towards the process of one's application at all stages of the recruitment process."

The advertisement for job applications at UNRA followed the sacking of the entire staff by the new management led by executive director, Allen Kagina, in a bid to restructure the roads body.

The sacking of all UNRA's 900 staff members in was prompted by numerous cases of corruption and fraud. Among the most prominent cases was the sh165b Mukono-Katosi road deal where sh24.7b was feared lost.

The contractor, who claimed to be Eutaw Construction Company of US whereas it was not, allegedly used fraudulent bank and insurance documents to secure the 74km road deal.

The deal was inked following a directive by the Works Minister, Eng. Abraham Byandala, to the acting UNRA executive director, Eng. Ssebbuga Kimeze, to expeditiously sign the deal before due diligence was done.

Byandala and Kimeze together with several other UNRA staff implicated in the scandal have since lost their jobs and are facing prosecution in the Anti-Corruption Court.

WHY MORE DISTRICTS FOR BUGANDA?

WHY MORE DISTRICTS FOR BUGANDA?