From Besigye to Mbabazi: the NRM story

Although it is Mbabazi who sued, the 2016 presidential race was between Museveni and Besigye.

Although it is Mbabazi who sued, the 2016 presidential race was between Museveni and Besigye.

In a unanimous decision, court dismissed the petition and in effect cleared the Electoral Commission (EC), Museveni and the government of allegations of orchestrating malpractices in the February 18 presidential elections.

With the ruling, it means Museveni can now be sworn in to begin his fifth term in office. First elected in 1996 under the 1995 Constitution in a race against Dr. Paul Semogerere, Museveni has since won subsequent elections.

In 2001 Museveni faced his first formidable challenger, Besigye, with whom he had had a standoff over making political statements while a serving soldier. It is the row that raised Besigye's profile and made him a serious contender. Besigye had been a central figure in the

National Resistance Movement (NRM) and was once the influential National Political Commissar who later played a significant but questionable role in the 1996 elections as Museveni's campaign agent. Since the 2001 polls, Besigye has lost to Museveni in all the elections. In two of them (2001 and 2006) he petitioned court but lost as the malpractices were "not substantial" enough to change the outcome of the results, according to the Supreme Court. 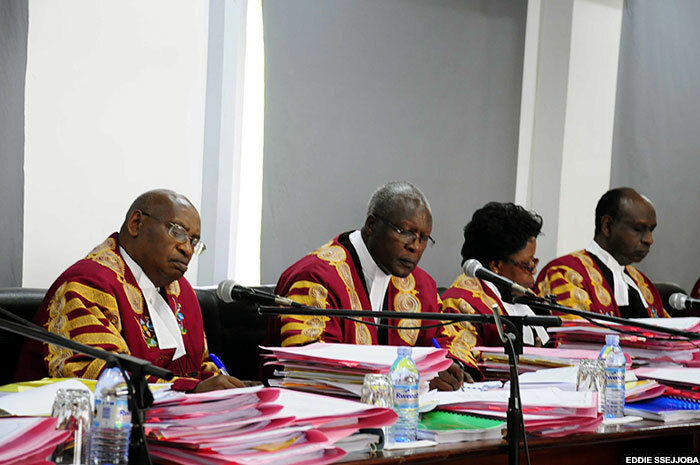 Disappointed with the 2006 court decision, Besigye vowed never to take the legal recourse again. That is why in 2011 he never considered the court option after he was defeated by 68% to 26% votes. Instead he chose protests to bring down the government and also vowed never to participate in any election, which is managed by the EC under the leadership of Eng. Badru Kiggundu, a pledge he later backtracked on.

The 2016 election, like the 2001, was a big test for Museveni because both had contenders who were previously NRM leaders inspired by internal contradictions. In 2001, Besigye based his campaign on the Movement going off course from the reasons that had informed the decision to wage war on the Obote II government. In this year's race, Mbabazi pointed out that the NRM had lost steam and needed to be propelled by new energy to ‘go forward'.

With Mbabazi, a close Museveni ally and confidant in the race many thought this would be the President's toughest and probably his end.

The opposition needed someone of his calibre to weaken Museveni and the NRM. And in Mbabazi was that candidate who, in the oppositions' anticipation, would divide the NRM vote and give its main candidate, Besigye, the advantage. However, this was not a planned strategy, but rather a situation that presented itself and the opposition grabbed it but squandered it by not fielding a sole opposition presidential candidate.

It is Mbabazi's decision to run for president that provoked Besigye to abandon his 2011 vow not to compete and soon there was a battle of egos between the two men. Each thought he was better than the other and so could not accept to be subordinate.

Against this background another tug of war ensued. On one hand a section of the civil society and a few donors preferred Mbabazi because of his past association with Museveni and roles as Prime Minister and NRM secretary general. Then on the other hand was the FDC sticking to Besigye who the civil society and donors were uncomfortable with because of his previous defeats.

FDC and Besigye saw a possibility of Museveni and Mbabazi dividing the NRM votes and planned to exploit it. With Mbabazi insisting he had not quit NRM, it worked well for FDC. But as the campaigns progressed it emerged that Mbabazi was not as popular as had been hyped. No top NRM backed him, at least openly.

After defeating Besigye in past polls, Museveni needed a new challenger to prove his strength. And Mbabazi, once known as ‘Mr. Clean', ‘Super' minister and possible successor to Museveni, stepped forward but performed poorly.

It seems a pattern is emerging where Museveni and the NRM building capacity of individuals, including the big four, who moved to the opposition.

Two is the former local government minister, Bidandi Ssali, who parted ways with Museveni over the lifting of term limits and contested for president in 2006 but badly lost. He was believed to be the brain behind Museveni's electoral victories and a superb strategist with a health support base in local governments.

Three, Eriya Kategaya, once dubbed Museveni's number two and successor but fell out also over the scrapping of term limits but returned to NRM after a stint in the opposition. And four is Mbabazi.