Hundreds of Christians on Sunday thronged the Queen of Peace Shrine Kiwamirembe -Kajjansi along Entebbe road in Wakiso district as the Catholic Church marked the Divine Mercy day.

Divine Mercy day is commemorated in remembrance of God's great message conveyed through Sr Faustina of Krakow, Poland, as God revealed the pattern of Christian perfection based on trust in God.

She was born on August 25, 1905 in Gogowiec in Poland in a religious peasants' poor family, the third of ten children. Faustina died on December 5 1938.

Msgr Charles Kasibante asked the congregation to be good Samaritans whenever they are, forgive those who betrayed them and always receiving church sacraments.

Kasibante warned Christians to avoid bad actions which take place in different places, as depicted in media. He challenged them to always pray through Divine Mercy to overcome worldly challenges.

Kasibante reminded Christians that Pope Francis opened the door on in Rome in this year of divine mercy, to allow Christians to receive the mercy of God.

Kasibante said this was intended to enable them go through the doors to receive God's mercy. 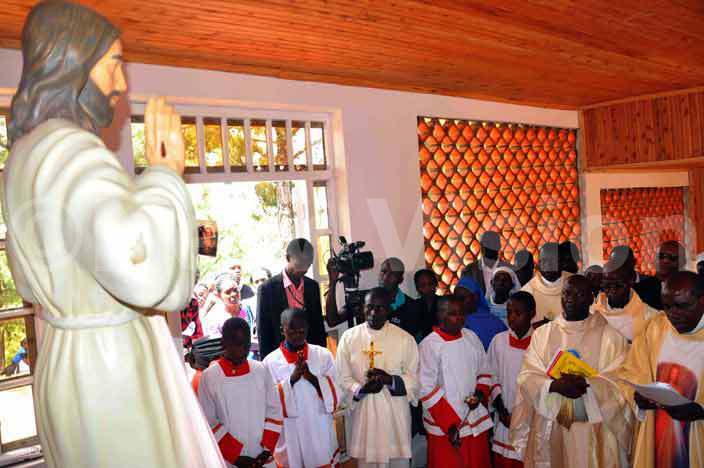 Kasibante explained to the congregation that the Divine Mercy is a Roman Catholic devotion based on the approved apparitions of Jesus Christ to Sister (now Saint) Maria Faustina Kowalska of Poland in the 1930s before her death in 1938 at the age of 33.
Pope John Paul II made the surprise announcement of this change in his homily at the canonization of St. Faustina on April 30, 2000.

He declared: "It is important then that we accept the whole message that comes to us from the word of God on this Second Sunday of Easter, which from now on throughout the Church will be called 'Divine Mercy Sunday.

"Divine Mercy Sunday was made an official feast day for the entire Catholic Church by Pope John Paul II in 2000 on the day he canonized St. Faustina, who is known in the church as the "Apostle of Mercy." The feast day has been celebrated on the second Sunday of Easter in the worldwide church since 2001, making this year the 16th anniversary of the feast." He said.

Kasibante asked the congregation always to emulate St Faustine as they do good things to others not only they knew but to all they see that they need God's mercy.


Kasibante also encouraged Christians to always receive sacraments as they are church obligations.

He said Pope Francis' explicit desire is that this feast be celebrated on the first Sunday after Easter. This Sunday is designated in "The Liturgy of the Hours and the Celebration of the Eucharist" as the "Octave Day of Easter."

He added that "I desire that the Feast of Mercy be a refuge and shelter for all souls, sinners. On that day, the very depths of my tender mercy are open. I pour out a whole ocean of graces upon those souls who approach the fount of my mercy. The soul that will go to Confession and receive Holy Communion shall obtain the complete forgiveness of sins and punishment.

On that day, all the divine floodgates through which grace flow are opened. Let no soul fear to draw near to me, even though its sins are as scarlet."

He said that on this celebration Plenary Indulgence is obtained by observing the usual dispositions that are on place for the granting of this grace through the Intercession of the Catholic Church, that is: Sacramental Confession, Holy Communion, to pray for the intentions of the pope.

After the mass, Kasibante blessed the Devine Mercy Grotto in the sanctuary at Sacra-Santa ladders built at Calvary. And another opportunity was given to the people to have a moment of prayer and a simple word to Saint divine Mercy and since they were very many, the lines were very long yet people wanted to touch on the Grotto more and more.

And I imagined a situation in the oratory when every Christian wants to say something and all of them kneeling down to venerate the Divine Mercy.

Huawei jumps ahead of Apple in tough smartphone market