Museveni in Sebei to assess security situa...
Next Story

In the petition, several offences and illegal practices were allegedly committed contrary to the constitution

In the petition, several offences and illegal practices were allegedly committed contrary to the constitution

A panel of nine justices of the Supreme Court will today give their verdict on a presidential poll petition filed by former premier Amama Mbabazi, challenging the outcome of the February 18 presidential polls.

Mbabazi filed his petition on March 1, 2016 seeking a court declaration that President-elect Yoweri Kaguta Museveni was not validly elected and that the presidential results that the Electoral Commission (EC) boss, Badru Kiggundu, declared on February 20, were null and void.

He also wanted court to order a vote recount in 43 districts where he alleges that there was massive vote rigging.

The petition was instituted under the Presidential Elections Act (PEA) and against Museveni, EC and the Attorney General for noncompliance with the PEA and the constitutional mandate.

Mbabazi argued that during the presidential elections, several offences and illegal practices were committed contrary to the PEA and the constitution.

Some of the offences he accused Museveni of committing include voter bribery, intimidation, making of derogatory statements against opponents, using of state resources without proper authorization, meting out violence on supporters of his opponents and war mongering. 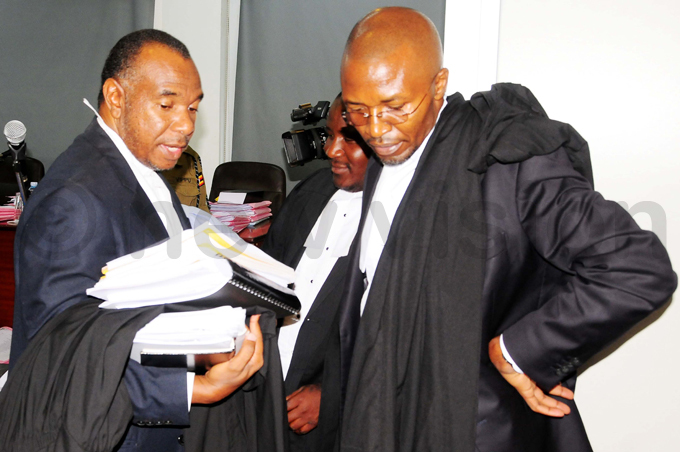 He accused EC of failing to properly compile a national voters' register, retiring the previous register illegally, illegally nominating Museveni, giving preferential treatment to Museveni, delayed delivery of polling materials, chasing away of other candidates' polling agents from polling stations, allowing people to vote before and after the polling time and allowing the commencement of the polls with pre-ticketed ballot papers.

Others are using of the biometric machine which was slow and unreliable, failure to control the distribution and use of ballot boxes and papers, allowing voters without valid cards to vote, allowing crime preventers at polling posts and tallying votes in the absence of his agents.

He continues and says, "Museveni on various occasions threatened that if the voters elected anybody else, Uganda would go back to war and this had the effect of influencing the voters to vote for him so as to maintain the status quo."

Mbabazi also accused the Inspector General of Police Gen. Kale Kayihura of ordering officers under him to arrest, humiliate and sabotage his consultative meetings in preparations for his nomination as a presidential candidate, eastern Uganda on July 15, 2015. He filed over 60 affidavits, pictures and two video evidences to support his case.

In response, Museveni described Mbabazi's petition as vague, ambiguous and lacking sufficient particulars necessary for him to provide a concise answer. He denied ever bribing any voter, intimidating any person and making derogatory statements.

In support of his response, Museveni filed over 50 affidavits including one from the NRM secretary general Kasule Lumumba, the Prime Minister Ruhakana Rugunda, the KCCA director Jennifer Musisi and the Uganda National Roads Authority boss Allen Kagina.

EC in its response also denied all the allegations and contended that the petition lacks legal basis and is a waste of courts' time. The Attorney General also had the same reply.

The justices converged in court for a week and accorded each party time to make its submissions. During the hearing, it ordered EC to produce tally sheets and declaration of result forms in court and avail copies to Mbabazi's lawyers.

The judges also accepted an application by eight Makerere University law dons to join the proceedings as friends of court (commonly known as Amicus Curiae). They however, declined to grant nine civil society organizations the same request and instead advised them to avail their evidence to Mbabazi's team of lawyers. 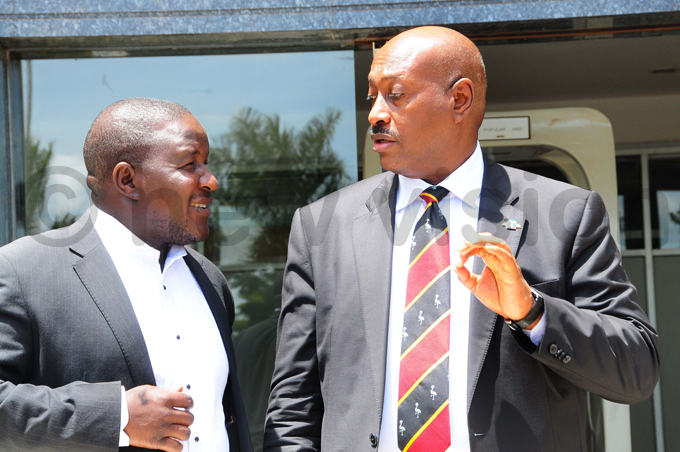 Attorney General Fred Ruhindi (R) one of the respondents chats with with Mbabazi's lawyer Asuman Basalirwa after a court session. (Credit: Nicholas Oneal)

Museveni's team was led by Didas Nkurunziza, Kiwanuka Kiryowa, Ebert Byenkya, his son in law, Edwin Karugire and Joseph Matsiko. It also had 30 other lawyers to assist the lead team.

As required by the constitution and the laws governing the electoral process, the court has only one month within which to hear the petition and make its verdict. Therefore, the verdict is going to be read today, being the last day of the month.