Out of the 143 cases of press freedom and rights violations, the police was responsible for 107, accounting for over 70% of the abuses

TV journalist Isaac Kugonza being helped by police after he was shot by a rubber bullet during a scuffle to arrest lord mayor Erias Lukwago. This was at Wakaliga Kampala on November 16, 2015.Photo by Ramadhan Abbey

Out of the 143 cases of press freedom and rights violations, the police was responsible for 107, accounting for over 70% of the abuses

A new press freedom index for Uganda has painted a gloomy picture for the media freedoms, showing that cases of violations against journalists by security agencies and non-state actors more than tripled last year.

According to a report authored by Human Rights Network for Journalists Uganda (HRN-Uganda), 143 cases of violations of press freedoms and rights were documented in 2015 compared to 40 cases in 2014.

Uganda went to the polls on February 18, 2016 to elect a new president and MPs after months of political campaigns in 2015. Last year was characterized by high-stakes electioneering period in a charged political landscape.

The press freedom index released Tuesday at Imperial Royale hotel in Kampala indicates that out of the 143 cases of press freedom and rights violations, the police was responsible for 107, accounting for over 70% of the abuses.

Cases of media freedoms and rights violations by non-state actors were 25. The Resident District Commissioners (RDCs) were responsible for five cases while three were documented against the media owners.

A total of 116 violations were reportedly committed against male journalists while 27 involved female reporters.

The cases documented include assaults, inhumane treatment, seizure of news gathering equipment and detention of journalists without charges.

One of the cases involved WBS TV journalist Andrew Lwanga, who was reportedly beaten by the former Old Kampala district police commander, Joram Mwesigye, while filming a scuffle between the youth calling themselves unemployed and police in Kampala.

Lwanga, who had his spinal cord damaged, is currently in the US for a surgical procedure.

Another TV journalist, Isaac Kugonza, was shot at by police during the mayhem that ensued after the Electoral Commission controversially suspended the nomination process for Kampala Lord mayoral candidates last November. An X-ray scan revealed that the bullet cracked his skull.

Globally, close to 100 journalists were killed in 2015, according to the New York based Committee to Protect Journalists.

Some of the violations allegedly committed by RDCs include blocking opposition political candidates from being hosted on radio stations.

The HRNJ-Uganda national coordinator, Robert Ssempala, condemned the practice of settling disputes between journalists and their tormentors out of court. 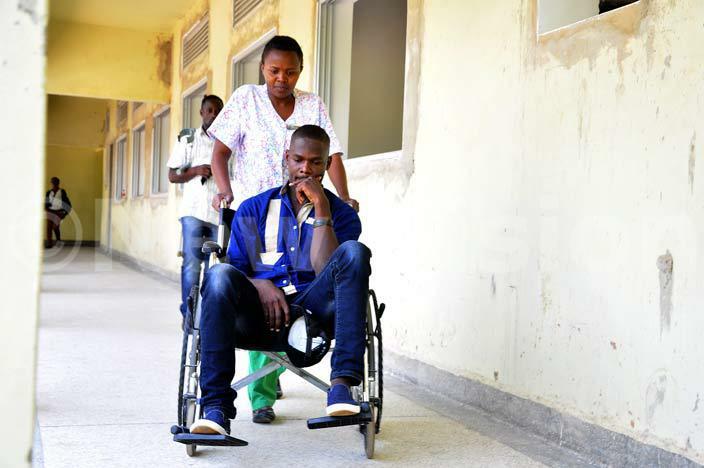 Andrew Lwanga seated in a Wheel chair during his admission at Kampala Hospital, Kololo where he was scheduled for a yet to be scheduled operation. Lwanga said he needed time to prepare mentally for the procedure

The practice, he explained, has set a precedent for the perpetrators of media freedoms violations to continue to commit the same crimes and get away with them.

However, as the report launch event came to a close, it emerged that Judith Naluggwa, a Bukedde TV journalist, who was reportedly assaulted by the minister without portfolio Abraham Byandala at Anti-Corruption Court last week, opted to settle the dispute with her alleged abuser outside court yesterday.

The Daily Monitor managing editor (print), Charles Bichachi, noted that the rising cases of violations against journalists indicate the state has move away from using draconian legislations to clump down the media to physical attacks.

He does not buy the idea of launching negotiations between the police and media to turn the tide. "We cannot negotiate for our rights. Even if the journalists are in the wrong, the response by the police should not be physical attacks," Bichachi said.

The chair of the National Association of Broadcasters, Kin Kariisa, said the trend shows the country's leaders are not bothered by abuses against journalists.

The NBS TV Chief Executive Officer agreed that some of the media owners and managers are abusers of journalists.

Those who prefer talking to fighting have already won

Bunyoro question: Give land to all occupants

Bunyoro question: Give land to all occupants