'I went home to wait for my baby's death'
Next Story

“Coming from Switzerland to Karamoja, it was like beaming in. It was very impressive: beautiful country, lovely people."

“Coming from Switzerland to Karamoja, it was like beaming in. It was very impressive: beautiful country, lovely people."

Ugandan and international artists came together with Viva con Agua to support the latter's water and sanitation projects in Moroto, Karamoja region through an artistic exchange and music collaboration.

Project visits, workshops and performances in Moroto and Kampala were some of the activities over the past week.

Last week on Tuesday - World Water Day (March 22) - a group of musical and visual artists traveled with the Viva con Agua team from Kampala to Moroto.

The group, including local and international artists, visited pit latrines and water facilities  built by local partners of Viva con Agua, before later meeting with the Karamojong community to learn about how to make the water and sanitation projects sustainable.

A fundraising and awareness-raising concert was held for the Moroto residents, with popular Ugandan musician Bobi Wine firing up the crowd.

He represented Uganda alongside Maro, and the two, like their international counterparts, shared their experiences in the northern Ugandan district on social media.

"Coming from Switzerland to Karamoja, it was like beaming in. It was very impressive: beautiful country, lovely people," wrote Knackeboul, also hailing Viva con Agua for their efforts in support water and sanitation, as well as for the cultural exchange.

Megaloh from Germany called it a "blessing" to be in the country.

"I felt more at home in this one week than I felt in all my life in Germany. I'm very grateful and proud to be part of this."

In Moroto, Bobi Wine spoke of the importance of Ugandans taking responsibility for their own wellbeing at the Moroto Municipal Primary School.

"I want you to remember that as much as we have our Muzungu friends that come to support us, most importantly it is us that can change our water from dirty water to clean water, from bad water to good water. So I want everybody to say ‘we can do it by ourselves!'"

Two days later, Bobi Wine and Maro did a collabo with Octopizzo (Kenya), Megaloh, Knackeboul, the Ghanaian Stallion (Germany) at the Firebase studio in Kampala.

The musical work was inspired by their trip, and a music video was filmed in the following few days. The song's audio and video are due to be released in all four of the artists' countries in May this year.

"The song we did together is dope, it is like a déjà vu," said Octopizzo of the collabo. "The German producer Ghanaian Stallion had a sample in my language [Swahili] and he didn't even know. Things just fell in place. They brought a German word that meant the same thing in Swahili. Everybody brought their own vibe... it was deadly. If we had a different beat from that, it wouldn't have come through, but this was a perfect fit."

"I've had the beat for a while," explained the Ghanaian Stallion, "because Megaloh and I are trying to use more and more African samples. The compilation of African samples and modern drums has a lot of potential to be the new music in the next few years, because everyone in the world can relate.

"I had the beat and when we were sitting in Moroto, I was playing the guys the beats, and within two seconds Octo said ‘this is the one'. There is a vocal sample that says something which is actually Swahili meaning ‘I have something to say,' so we already had the message for the song.

"It turned out really great. Everyone delivered. Everyone killed it, actually."

On Saturday, the collective of Viva con Agua artists performed again for free at the We Love Youganda concert on the Kamwokya football pitch.

Those who starred in this year's recorded song were joined by other Ugandan artists who have been supporting Viva con Agua for years, like Sylvester and Abramz, Lady Slyke and others.

"We came up with a lot of musicians," said Viva con Agua spokesperson Claudia Gersdorf, "and I observed in the audience that every singer and hiphopper inspired people.

"Everyone managed to send a message. The concert wasn't just about music, fun and dancing together, but it was about important messages of change, responsibility, and dealing with their own life. The music collected the people.

"Musicians that I spoke to after the show want to stay in touch and exchange more in the future. Regardless of the country they come from, they want to continue this network and mission for a world where every person has access to water and sanitation," said Claudia. 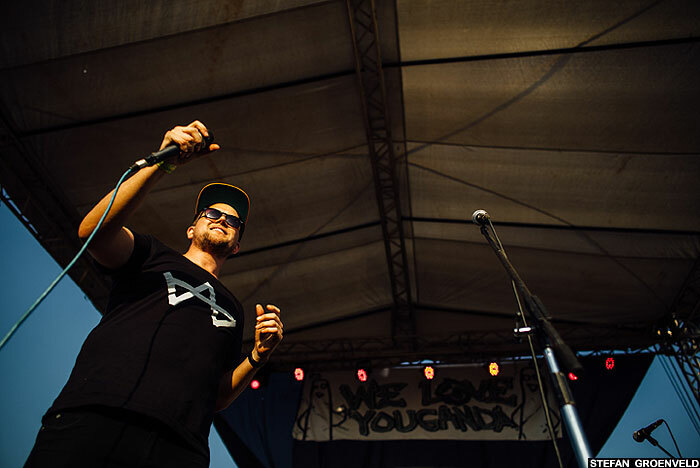 Knackboul from Switzerland, on stage, sported a cap

The foreign visitors are now leaving the country, but their mission is being taken up by Ugandans working in Kampala. The founders of Viva con Agua Kampala, Latim Nobert, Papa Shabani and Adam Lakouch started to build up the crew more than one year ago, and with the support of the Ugandan network, they're reaching a new level to change perspectives in this so-called NGO sector.

"I know I'm a white person working for an NGO from Europe," added Claudia, "but it is also a challenge to change the perspective of Ugandans, because it's about the people here in Uganda, the young generation - very skilled, very talented, very qualified - and we as guests in Uganda can learn a lot.

"We can find a new vibe of inspiration to take back to Germany. In Germany, often the media are showing the same negative images of Africa, but thanks to some Ugandan journalists working for international media who came out to the We Love Youganda Festival, they captured important stories of a talented young generation that gets active to change and build up its own country. With Viva con Agua, this changing of perspectives comes from connecting through music, art and sports. We all love to be on eye level with each other, we love Uganda."

On his part, Nobert Latim, founder of Viva con Agua Kampala, said: "This was the first time we were really going deep into organizing the festivals and workshops. It was really challenging, but in the end it was worth it.

"Seeing all the international artists, musicians and dancers work together was really a good example of the uniting factor of Viva con Agua. For the vision ALL FOR WATER - WATER FOR ALL."

Kenya's Octopizzo with Ghanaian Stallion in the background

Maro of Uganda was part of the well-attended event

Ugandan, international artists to perform at We Love Youganda Festival