Christian devotees are nailed to crosses in the Philippines as Asia's Catholic heartland marks Easter with an extreme display of faith. WARNING: GRAPHIC IMAGES OF CRUCIFIXIONS AND BLOOD

Men dressed as Romans raise up carpenter Ruben Enaje (C), 55, after he was nailed to a cross as part of his penitence during the reenactment of the crucifixion of Jesus Christ during Good Friday celebrations ahead of Easter at the village of Cutud near San Fernando, Pampanga province, north of Manila on March 25, 2016.

Christian devotees are nailed to crosses in the Philippines as Asia's Catholic heartland marks Easter with an extreme display of faith. WARNING: GRAPHIC IMAGES OF CRUCIFIXIONS AND BLOOD

Christian devotees were nailed to crosses in the Philippines on Friday as Asia's Catholic heartland marked Easter with an extreme display of faith.

The gory crucifixions played out in dusty fields throughout the day with thousands of spectators looking on, and as other penitents flogged themselves bloody with whips.

Men dressed as soldiers of the Roman Empire hammered large metal spikes through the hands and feet of Willy Salvador, who grimaced in silence as he lay with his arms spread atop a wooden cross.

"This is my personal way of thanking Him (God) for healing me," the 59-year-old fisherman told AFP, moments before being dragged barefoot through the streets of San Juan village.

"I know you would not believe me, but God helped me recover from a nervous breakdown," said Salvador, who added he had been doing it every year since 2006.

Ritual crucifixions are among the Catholic world's most extreme forms of worship and are done as part of Good Friday celebrations in some small villages in the Philippines, home to 80 million-plus Catholics.

They are held to re-enact the crucifixion of Jesus Christ, whom Christians believe was put to death so humanity could be cleansed of its sins.

The nails go through both hands and both feet, but do not bear the weight of the penitents, who spend only a few minutes on the cross before being taken down and having their bloody wounds treated.

- Souvenir shirts -After Salvador, it was the turn of street vendor Alex Daranang, whose 20th crucifixion fell on the eve of his 60th birthday. 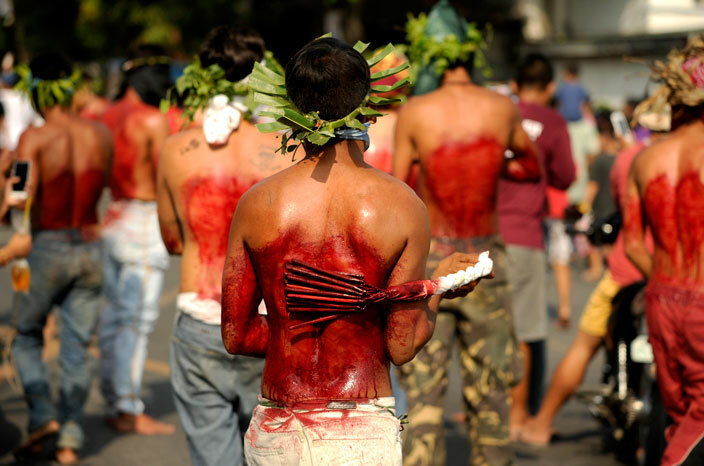 "The wounds heal fast," the gap-toothed grandfather told AFP. "In two days they are practically healed."

The act is frowned upon by the church, but has become a major tourist attraction.

Several thousand sightseers, including more than a dozen Western tourists, descended on the nearby village of San Pedro to witness the mock crucifixions and other extreme forms of piety.

Motivational speaker Benjie Pazcoguin said "there is a symbolic meaning to these crucifixions. Definitely, it reinforces my faith."

"I will come to see it again next year," he said, despite the gore.

A giant television screen displayed the macabre events to the rest of the crowd, who shielded themselves from the heat with bright-coloured umbrellas. 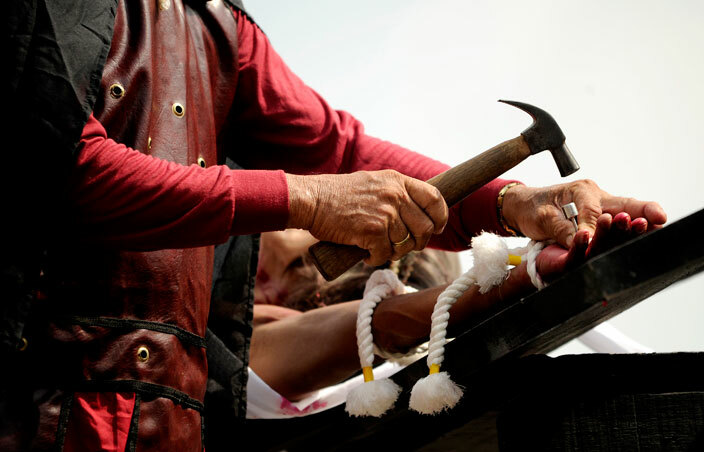 Willy Salvador, 59, is nailed to a cross

On the sun-scalded pavements of the village streets, hundreds of shoeless men, their faces shrouded in black cloths, shuffled in slow processions as they lashed their own backs with whips tipped with bamboo strips.

The men stopped in unison occasionally to lie face down on the pavement, handing over the whips to assistants who administered more punishment.

Blood splattered on the spectators, while one of the penitents sank to his knees and began to throw up. 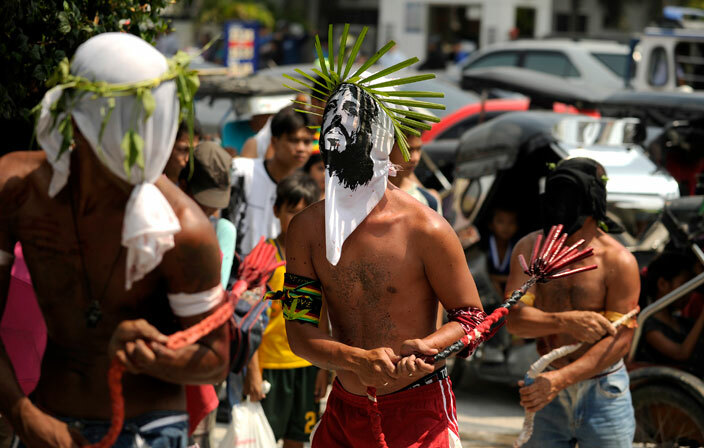 "You actually feel good, because you know some of your sins are being forgiven," construction worker Joel Yutoc, 23, told AFP as he sucked on a cigarette after the ordeal.

- Self-flagellations -The extreme practices serve as an alternative to acts of Good Friday penance prescribed by the church, such as abstaining from work or from eating meat, and visiting a series of churches on foot to pray.

Busting the myth behind 'ekinanansi'

Antenatal clinics could save your child from hydrocephalus

Don't be a haven for worms