"When I become president, the days of treating Israel like a second-class citizen will end on day one."

"When I become president, the days of treating Israel like a second-class citizen will end on day one."

Hillary Clinton and Donald Trump exchanged jabs Monday as they separately courted a massive crowd of pro-Israel lobbyists, putting their differing views on supporting the Jewish state front and center in their White House battle.

Democrat Clinton positioned herself as an unwavering friend to Israel, while bashing her rival as prejudiced and insufficiently supportive of one of America's closest allies.

It was a sign of likely points of attack should she face the Republican frontrunner in November's US presidential election.

"We need steady hands, not a president who says he's neutral on Monday, pro-Israel on Tuesday and who knows what on Wednesday, because everything's negotiable," the Democratic frontrunner told nearly 18,000 attendees at the American Israel Public Affairs Committee's annual policy conference.

Trump traded the guerrilla tactics of his campaign for a day of more strategic political positioning, making three separate stops in Washington in a bid to look and sound more presidential as he and Clinton appeared to shift from their primary contests toward the general election. At AIPAC, he dismissed the former secretary of state as "a total disaster," and proclaimed his own "lifelong" love and support for Israel.

"When I become president, the days of treating Israel like a second-class citizen will end on day one," Trump told America's most influential pro-Israel lobby in a speech notable in part because it had been crafted in advance and he read off teleprompters.

Trump's appearance was a point of contention for some, including a number of rabbis who vowed to walk out in protest. His address went ahead uninterrupted.

Clinton earlier implored the crowd: "If you see a bully, stand up to him." 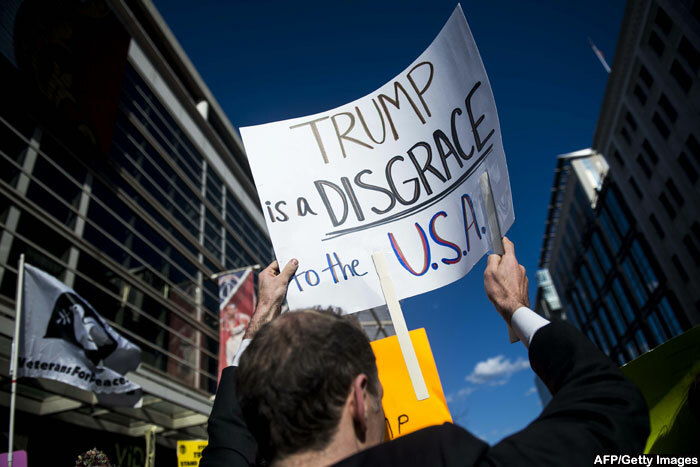 Trump has stressed in the past he wanted to be a neutral broker between Israel and Palestinians and not take "sides" when it came to peace talks.

On Monday, he seemed to change tack.

"We will move the embassy (from Tel Aviv) to the eternal capital of the Jewish people, Jerusalem," he said to a standing ovation.

"And we will send a clear signal that there is no daylight between America and our most reliable ally, the state of Israel."

Clinton said she would forcefully counter anti-Semitism, thwart Iran's proxies like Hezbollah and fight against a movement to boycott Israeli products.

But where she supported President Barack Obama's historic nuclear deal with Iran, Trump insisted his "number one priority" would be to dismantle the agreement.

Trump has faced pressure to release more details of his foreign policy platform and his team of consultants, amid reports that mainstream conservative and neo-conservative experts are loath to endorse him. 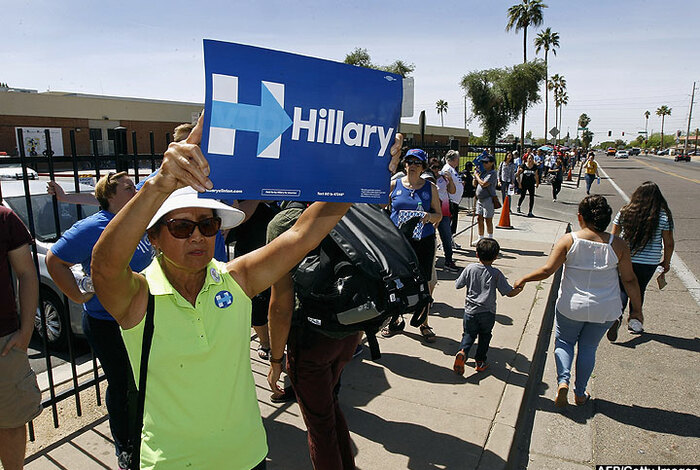 A supporter of Hillary Clinton holds up a sign outside Carl Hayden High School before Clinton's Get Out the Vote campaign event on March 21, 2016 in Phoenix, Arizona

Ahead of his speech, he unveiled the names of half a dozen advisors including Keith Kellogg, a retired US Army lieutenant general turned consultant who was chief operating officer for the US occupation of Iraq during its disastrous early months in 2003 and 2004.

When pressed on the choice at a news conference at a luxury hotel he is developing in Washington, Trump, who has said he opposed the Iraq war from the start, dismissed the concern.

And in a bid to thwart efforts by some Republicans to derail his nomination bid, Trump said he met with GOP players in Washington including Senator Jeff Sessions and other lawmakers, and Jim DeMint, president of the conservative Heritage Foundation.

"We had a good meeting and can't believe how far we've come," Trump said.

Trump has set off alarm bells with his rhetoric about Muslims, Mexicans and refugees, and his refusal to directly demand an end to violent skirmishes at his campaign rallies between protesters and his supporters.

"I don't want violence," Trump insisted, before saying the protesters were "not good people."

Without naming him, Clinton assailed Trump for "encouraging violence" on the campaign trail, "playing coy with white supremacists, calling for 12 million immigrants to be rounded up and deported (and) demanding we turn away refugees because of their religion.

"America should be better than this," she said. 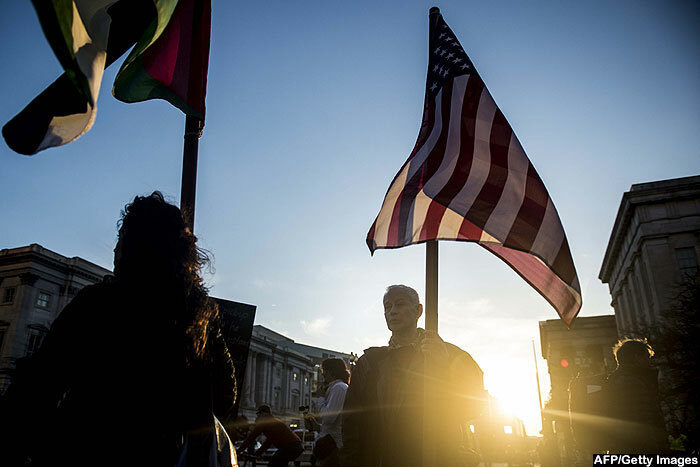 Clinton stressed that Israelis and Palestinians should not give up on hopes for peace, but she put forth a hard line against perpetrators and supporters of recent violence in the Jewish state.

Clinton alluded to Republican rivals and particularly Trump, warning against a US foreign policy "that would insult our allies" and "embolden our adversaries."

Nancy Epstein, a luxury marble distributor from New Jersey, said she came away from the marathon candidates' session favoring Cruz, who "spoke to my heart."

Trump, she said, sounded authentic about his support for Israel, but that was not enough.