Obama, the first US president to visit Cuba in 88 years, hails a "new day" in relations between the former Cold War foes.

US President Barack Obama (L) and Cuban President Raul Castro shake hands during a meeting at the Revolution Palace in Havana on Monday. (AFP)

Obama, the first US president to visit Cuba in 88 years, hails a "new day" in relations between the former Cold War foes.

Barack Obama and his Cuban counterpart Raul Castro vowed Monday in Havana to set aside their differences in pursuit of what the US president called a "new day" for the long bitterly divided neighbors.

Castro acknowledged there were still "profound" differences over Cuba's human rights situation and the decades-old, crippling US economic embargo on the island.

In a sometimes comic, sometimes tetchy press conference -- which in an extremely rare move was carried live on Cuban television -- Castro refused even to acknowledge that his government holds political prisoners. 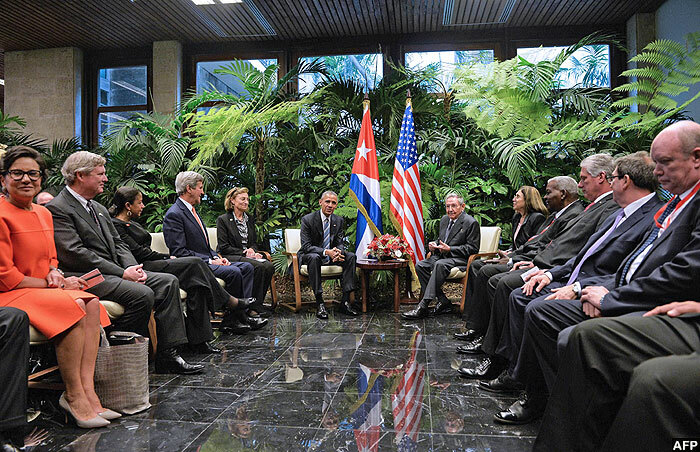 Presidents Obama and Castro met at the Revolution Palace in Havana

However, the mere fact that the joint press conference took place in Havana's Palace of the Revolution -- after the leaders met for more than two hours -- demonstrated how much has changed.

Obama, the first US president to visit Cuba in 88 years, hailed a "new day" -- a "nuevo dia," as he said -- in relations between the former Cold War foes.

On Tuesday, Obama will take that message directly to Cubans, in a speech that is expected to be broadcast live across the country.

"The speech is very important because it's the one chance on this visit to really step back and just speak directly to the Cuban people," said Obama foreign policy aide Ben Rhodes.

Rhodes signaled that Obama will touch on past relations, opportunities presented by the current opening and the possibilities of the future. 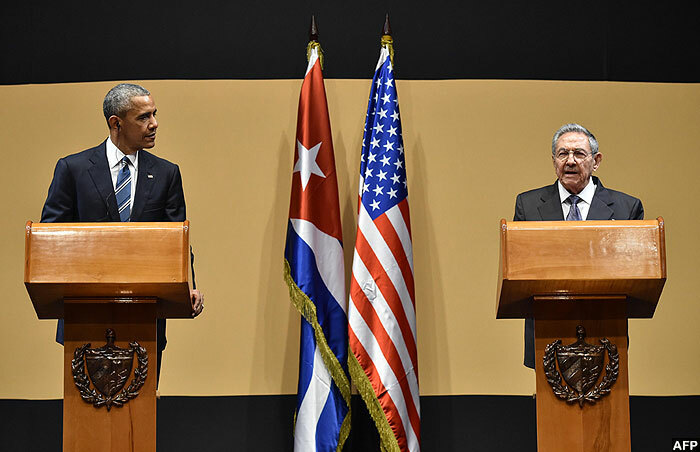 Obama offered a preview of that message after his talks with Castro, saying the days of heavy-handed US intervention in the island's affairs were over.

"Cuba's destiny will not be decided by the United States or any other nation," he vowed.

The US leader also said, without making any promises on timing, that "the embargo is going to end."

Part of Obama's message is also likely to be directed at Cuban-Americans, who have been the most vociferous opponents of lifting a decades old measures that Cuba deems a "blockade."

Obama is likely to make the case that forcing Cuba to open up diplomatically, as well as a gradual relaxation of the embargo, will promote democratic change.

But Obama is defending himself from critics who say he has given away too much.

Obama's visit has raised hopes among struggling Cubans that decades of economic and political stasis may be coming to an end.

But the brief detention of dozens of pro-democracy protesters hours before Obama's arrival Sunday served as a stark reminder of the regime's desire to retain its iron grip on power.

"I do not believe that President Castro wants to upend the ruling party or the system that they have."

The two presidents reviewed the troops at the Revolution Palace

In only his third formal meeting with Castro, Obama was greeted by a military band that played the Cuban and the US national anthems.

Obama then sat with the Cuban president against a backdrop of tall tropical plants.

Earlier, he laid a wreath at the monument of Cuban independence hero Jose Marti.

And despite the excitement among ordinary Cubans, officials appeared to be taking pains to give a restrained welcome. 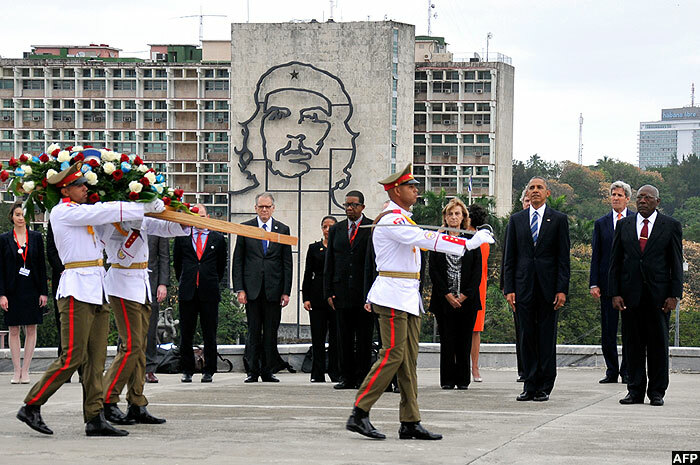 Obama, US Secretary of State John Kerry (2nd-right) and the Vice-President of the Cuban State Council Salvador Valdes Mesa (R) attended a wreath-laying ceremony at Jose Marti monument in the Revolution square of Havana 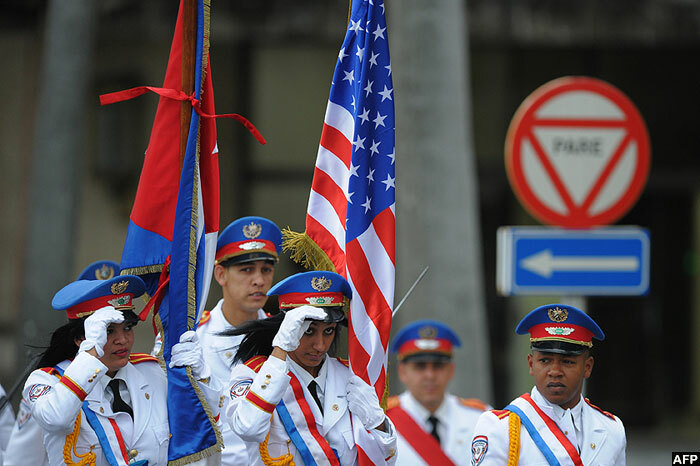 Castro did not greet Obama at the airport Sunday, sending his foreign minister instead, and a heavy police presence has ensured that Cubans have no chance of gathering spontaneously at any of Obama's appearances around the city.

The White House has all but ruled out a high-profile meeting between Obama and 89-year-old Cuban leader Fidel Castro.

"On this trip, we are not planning to meet with Fidel Castro," said Rhodes.

Paul Webster Hare, a former British ambassador to Cuba who teaches international relations at Boston University, said "Raul does not want a warm relationship with the US."

"He sees it in limited terms for the moment -- tourism revenue and remittances plus the changes to the sanctions," Hare added.

Later on Tuesday, Obama will also attend a baseball game between the national team and Major League Baseball's Tampa Bay Rays, before flying out. 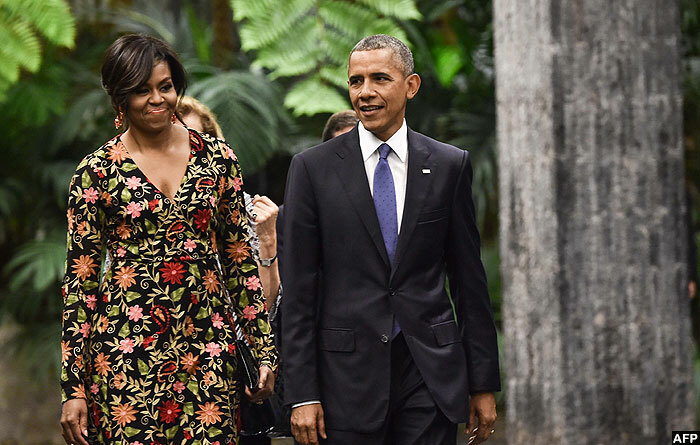 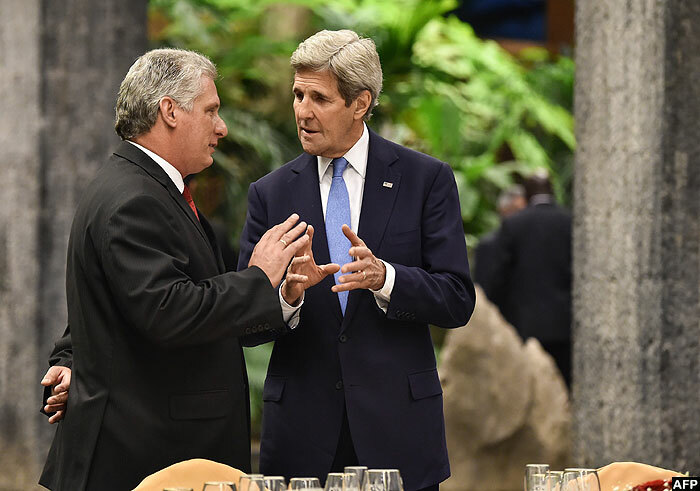 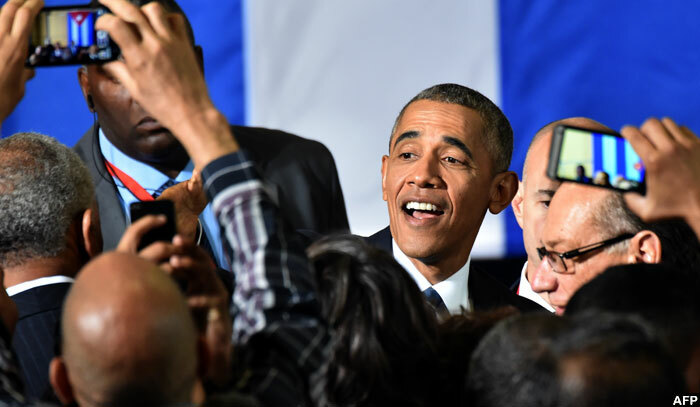