The Omar brothers Waleed and Wazir are confident they will make it to the podium in the second round of the Mountain Dew National Motocross Championship on Easter Sunday at the Uganda Motorsport Arena in Busiika.

Waleed told New Vision Sport on Sunday afternoon after training that he wants to improve his performance and leave the fourth position and be among the top three in the 85CC category.

"I want to finish among the top three this season and I will push the bike to limit come Sunday," Waleed stated.

His elder brother Wazir Omar said "I'm ready and I will do my best."

The Omar brothers face a tough challenge from Ben Nsumba who has been training in South Africa and has vowed to show his opponents in the 85CC class the skills he has acquired. 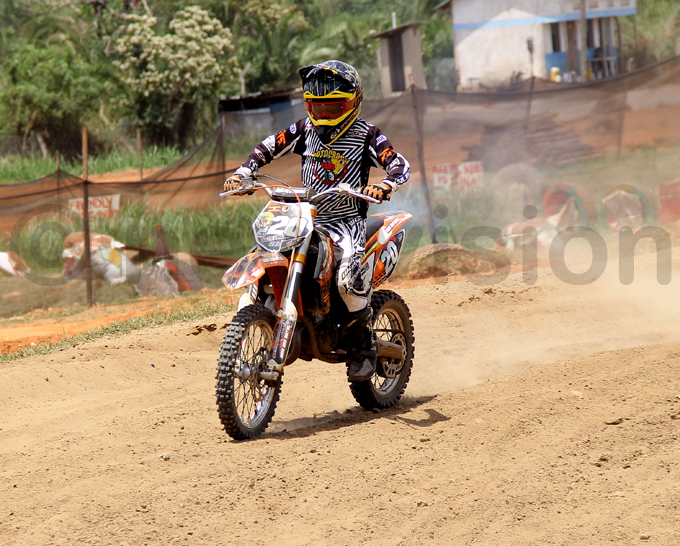 Waleed Omar during training at Busiika. Photo by Johnson Were

"I'm ready for them and I am going to show them the skills I learnt from South Africa," Nsumba stated.

Nsumba, 11, won the tightly contested first round at the Victoria Raceway Park Garuga that saw both Ssentamu and Aviv Orland crash in the first and second heats respectively.

Meanwhile rally drivers have requested the motorsport governing body (FMU) to allow them entertain the fans that will turn up at Busiika on Easter Sunday as they test their cars for the Kabale rally.

"We have requested FMU and they are yet to reply us, but it would be good for our fans and also the drivers who have bought new cars," Blick said.

Byona brought a new Evo 9, Mayanja, Mubiru (Evo X), Kananura bought a new Evo X engine while Blick and Suzan want to test the adjustments made on their engines before the Kabale rally.