Youth from Wakiso Kampala and Entebbe have been advised to always toil to get whatever they want in life rather than wait for easy things.

The message to the youth was convened by Rev. Father Herman Mukasa Ziwa during celebration of the International Youth Day, on Palm Sunday in Entebbe at Kitinda Beach.

He said youth want cheap easy things which end them into trouble often; he warned that things which are not hard earned do not come easy, they come with a price.

"You should not go for easy life. Do insist on getting things that you have not worked for, they will end you in trouble," Utilize your youth age as it is now for you to plan for the future," Ziwa said.

Ziwa told the congregation that they during this age when they are still energetic they should utilize their lives well without being involved in non-productive issues.

He encouraged them to actively engage in politics in order to win positions in society which will bring glory to the Catholic Church. 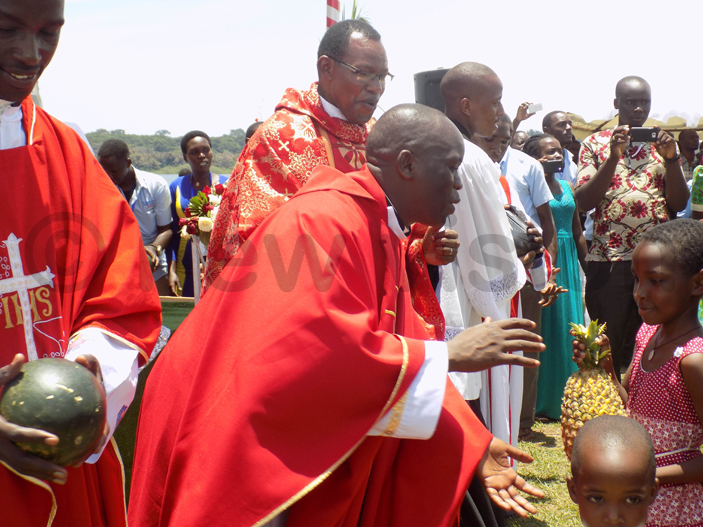 Rev Fr Herman Mukasa Ziwa flanked by Fr. Joseph Luzindana receiving a gift from a girl this during Palm Sunday mass at Kitinida Beach in Entebbe. Photo by Juliet Waiswa 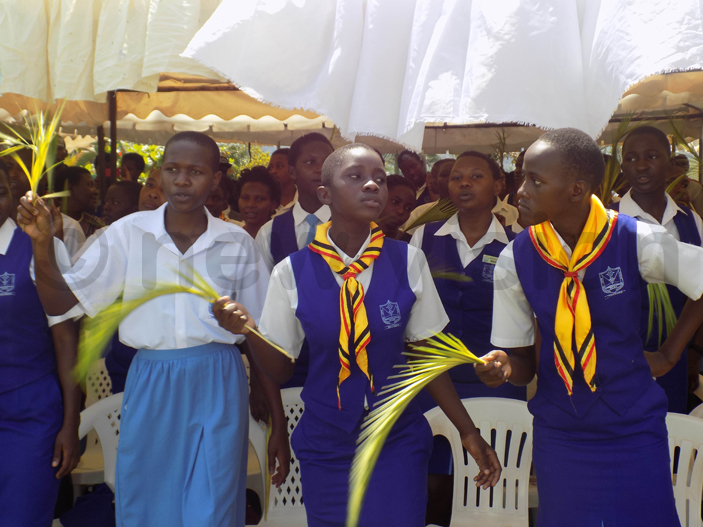 The hundreds of youth where also warned on indecent dressing saying that this is one way of enticing men who even end up taking advantage of them.

"The way you walk, talk and the way you present yourself matters in society. This alone can affect your future," Ziwa warned.

The Mass which was organized by the Entebbe Vacaret, was attended by several youths from Entebbe, Wakiso, Mukono and Kampala archdiocese.

The Youth Chaplin Entebbe Parish Father Emmanuel Lubega told Christians that during this season they should learn to give to the needy.

He said that the Parish had organized the celebration and accepted to contribute to the needy in the community. The parish made collections which were given to The Aids Support Organization (TASO) Entebbe.

The service was attended by the Mayor elect of Entebbe De Paul Kayanja and fathers from Namasuba, Nakawuka, among others.