Court to rule on Besigye detention case on Monday

Kizza Besigye has largely been confined to his home since the February 18 polls.

Kasangati Chief Magistrate's Court has set Monday 21st March to decide on whether it can proceed to hear an application filed by former presidential candidate Col. Kizza Besigye seeking orders to be unconditionally released from his home detention by the police and other security organs.

This was after prosecution led by state attorney Caroline Nabasa informed court presided over by grade one Magistrate Prossy Katushabe that, the case was wrongly filed before the court.

"Apart from being wrongfully filed before this court, the prayers made are similar to the application filed by the same applicant (Besigye) before the High Court civil division which has been fixed in May for hearing" Nabasa said on Friday.

In her affidavit in response, Nabasa also told court that Besigye's lawyers (David Mpanga and Frederick Mpanga) were illegally representing him because the matter before court is criminal and they needed to seek permission from the Director of Public Prosecution (DPP).

"Should court go ahead and hear the case, it would have set a precedent for the members of the public to take the authority of DPP. We pray that the case be dismissed." Nabasa said.

In reply, Mpanga said that the application before court relates to his client's human rights and not a private prosecution but an application for release under Article 23 sub article 3 and 4 of the constitution which states that any citizen arrested of any offense must be produced in court within 48 hours which has not been done to his client (Besigye). 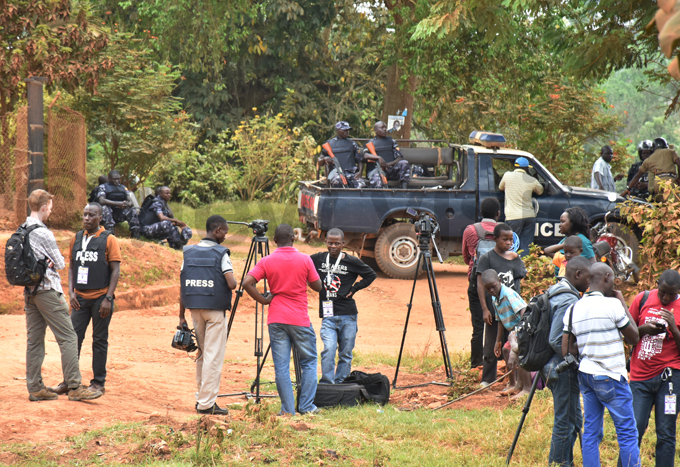 "My client has been detained by police since Feb 18 to date at his home without being taken to court. This has not been denied by prosecution" Mpanga said.

Mpanga said that the application before court is under the Police Act Sec 24 and 25 which states that any person arrested and not brought in court with in a period of 48 hours, he/she has a right to file an application before the Magistrate's court in pursuit of his rights.

"Your worship, there is not any kind of violation of the court process as asserted by my learned friend because we only seek a declaration for Besigye to be given his freedom but not an injunction restraining the state agency from executing their duties" Mpanga said.

Frederick Mpanga also Besigye's lawyer said that prosecution is trying to buy more time because when appearing in court on Thursday, Nabasa only asked time to file her affidavit in response but did not point out that the case was wrongly brought before the court.

"This has made me recall the incident on Thursday when we were told that the case was dismissed. I do not want to assume that the state was wasting her time on Thursday" Frederick Mpanga said.

He also maintained that the case was proper before the court citing a case filed by the applicant at Nabweru Chief Magistrate's Court in 2011.

Meanwhile the trail magistrate while adjourning the matter said that she was not in position to decide whether to proceed with the case because she was going to attend a law society meeting.

"Allow me to pass my ruling in the case on Monday. Actually today we were ordered (as Judicial officers) by the Chief Justice Bart Katureebe to adjourn all the matters to enable us attend the meeting" Katushabe said.

He filed the application following the continuous blockade of his Kasangati residence and was put under home arrest since Election Day on February 18.

Recently, the police spokesperson Fred Enanga said the presence of police at Besigye's home is intended to limit his movements during the post-election period following intelligence reports that some top opposition leaders were planning to cause mayhem in the city protesting the results of the polls.