A laboratory assistant observing the samples before approval at the Central Health Public Laboratories. Photo by Nancy Nanyonga

Experts have called for nationwide screening of the sickle cell condition in newborns.

Charles Kiyaga, a biomedical scientist and national coordinator for the Early Infant Diagnosis (EID) program at the CPHL, said over 25000 babies are born with the sickle cell condition in Uganda every year.

But, by five years, 80 % - 90% of these newborns have died — classifying the condition as one of the highest contributors to the 68, 000 children who die in the country before their fifth birthday.

"What is ideal is that every newborn is screened for this condition so that parents and health workers can know how to manage them (newborns) in case they have the condition," the EID national coordinator said during a media tour of the facility on Buganda Road in Kampala. 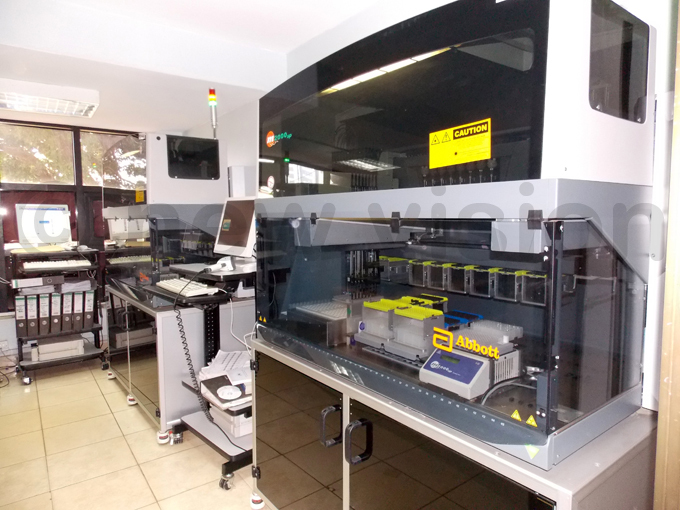 Some of the machines at the Central Health Public Laboratories along Buganda Road for testing different samples. Photo by Nancy Nanyonga

"Many parents suffer with babies who have this condition. But they don't even know that it is this condition that's afflicting their babies. Kids are sickly now and then until they die. But, if they (babies) were screened and confirmed positive for the condition, they can be helped to live."

The CPHL has capacity to test between 500 and 1000 samples a day. The challenge is the expensive reagents used to screen this genetic condition. A single test, including sample collection, goes for about sh10, 000.

"So, if we were to carry out tests for all the 1.6 million babies who are born in the country annually, (we would need about sh16b)" the EID national coordinator said.

"Currently, we are screening for sickle cell in newborns in eight districts from mainly north and eastern Uganda which have the highest sickle cell prevalence. But, it is a question of funding," he said.