How New Vision's Toto magazine is easing c...
Next Story

Kyebambe Girls- ‘The Star Empire'- are new inscriptions on Kyebambe Girls school gate, seen almost 400 metres away on arrival to this girls' only boarding, O and A' level school in Fort Portal.

True to the writings on her gate, Kyebambe Girls is indeed, gradually becoming the academic Star Empire in this sub-region.

The school has had its share of history in Uganda's education system. For years, it has had no massive renovation of its structures, save for the new Chapel, which is being built by old girls of the school. The Chapel's construction kicked off early this year, and it is gradually taking shape.

But as luck may have it, is now a new wave of developments, sweeping through the school. The Government, with the support of the African Development Bank has set up massive constructions, which have greatly helped change the physical infrastructure at Kyebambe Girls School.

A breeze sweeps through the school compound arousing the stature of wave of purity, love and humility which used to define Kyebambe Girls School.

In the school's motto, lies an undying spirit which has kept the century old school afloat. "Mukwekamba Tutaba Bagala," a Runyakitara school motto I will risk to loosely translate as "In working hard, let us not be lazy." This always propels students and administrators in this school, to another level. 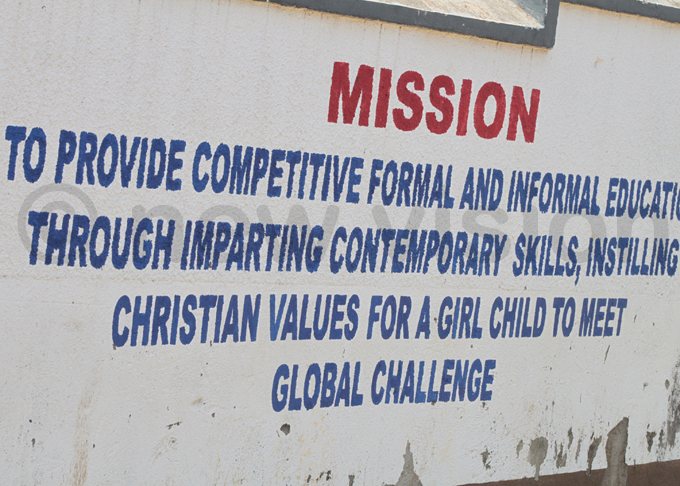 Keenly note that it is one of the handful schools in the country with mottos crafted in a local language. It is not surprising, since the school owes it foundation in Tooro Kingdom. When Omukama (King) Daudi Ikingura Kasagama Kyebambe IV was baptized in 1896 at Namirembe, no one knew that this would later culminate into the birth of Kyebambe Girls.

The Kingdom saw the first Christian King in Uganda, dynamic evangelism, and birth of Mission Education in Tooro Kingdom. On April 30, 1896 the King declared that his kingdom was now a Christian Kingdom and directed that all Chiefs must be Christians and should establish churches in their Chiefdoms.

Like a wild bush fire, evangelism and education spread through the Kingdom like a bushfire. Word went around that, "Ataasome ediini y'Omukama aliziikwa embwa" (Anyone who does not take the King's religion will be buried by dogs." In his desire for education, Omukama Kasagama wrote a letter to the Christian Missionary Society (CMS) in London, requesting for missionary teachers to come and teach his people.

This girls' school, sitting silently and proudly on one of Kabarole's hills has over years been eaten down by age.

The old buildings- especially the old dormitories on the school's campus, almost dominate the new breath of life into Kyebambe girls. 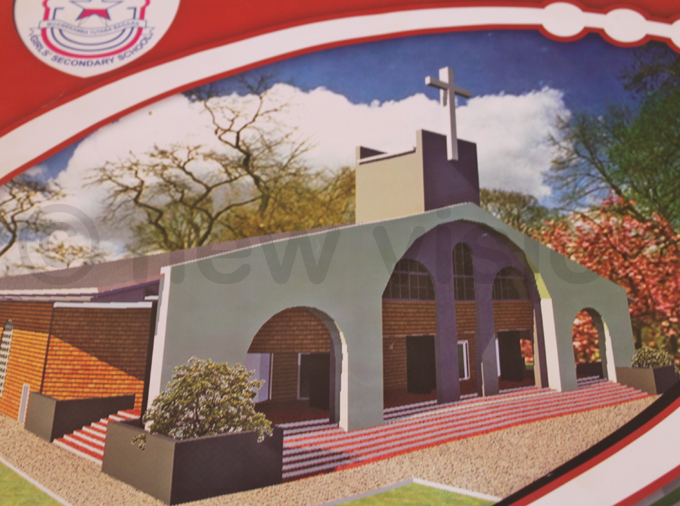 An artistic impression of the school's new chapel.

With its old age, civil wars, rise of new schools and other factors, this was inevitable. But not at any time, did the school's administration give up. The struggle continues and it is gradually rising again.

The school started as a mixed sex school, including the King who used to have private session of teaching. But since he wanted to lead by example, he would attend lessons with his subordinates at Kabarole Hill.

In 1911, the King, to set an example, sent his own daughter Ruth Komuntale at a tender age to be a border which attracted Chiefs and other people to send their children to school. About 49 pupils were borders, the number of pupils rose from 100 to 400.

As time would have it, Girls were separated from boys and moved to the other side of the hill and was named

Toro Girls' School (T.G.S), reading the three abbreviated letters of the school in Rutooro as TAGASA, a derogatory term to mean useless. It was purely a girls' primary school with four classes.

The missionaries later built a strong girls' school. In 1924 the first three graduate teachers and more other three nurses started working after their studies. Many other teachers graduated later and went to work in Bwera, Kigezi and Rwanda. The boarding section of the school was meant for only the privileged girls. 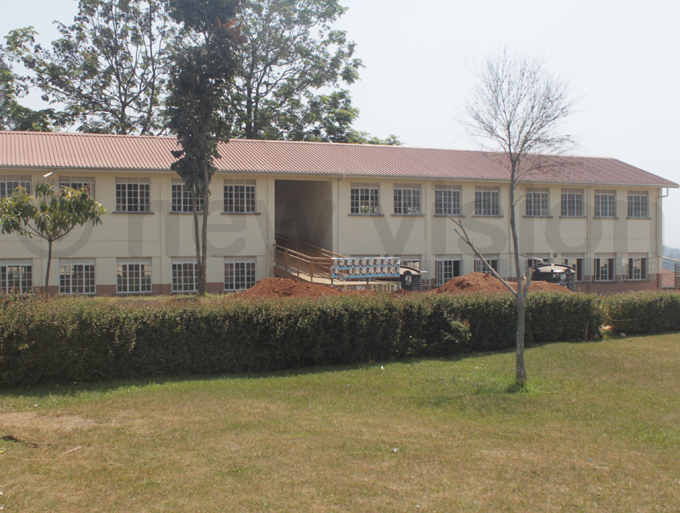 The school was later upgraded in 1938 from primary four to primary six. In 1941, its name was changed to Kyebambe Girls' School in commemoration of the late King Kasagama Kyebambe IV.  It was the first girls' school in the Western Province.

History has it that in 1944, the school was upgraded to a junior secondary school. Both the primary and junior secondary schools continued running together. Many girls as years passed joined the prestigious schools from various areas of Western Uganda. It was by then Kyebambe Girls' School. It was the first school in Uganda to have a Board of Governors, which had a real concern for the school.

But save for the rich history, all has not been rosy for the school over years. Due the civil war, the school gravely started declining in performance. Much as it is not out of the game, a lot remains to be desired on its stand on the national performance scale. In the past few years, it has managed to send a few  of its best A'level students on Government scholarship sand had a good number of others passing with in first grade at O'level.

Today, the school sits comfortably on a hill overlooking Fort Portal town. But it is itching with its old buildings. With a number of the buildings' paint completely washed off, and others with asbestos roofing; a lot leaves to be desired. But the school is not ready to give in. It has made a comprehensive change its usage of time, teaching and planning. 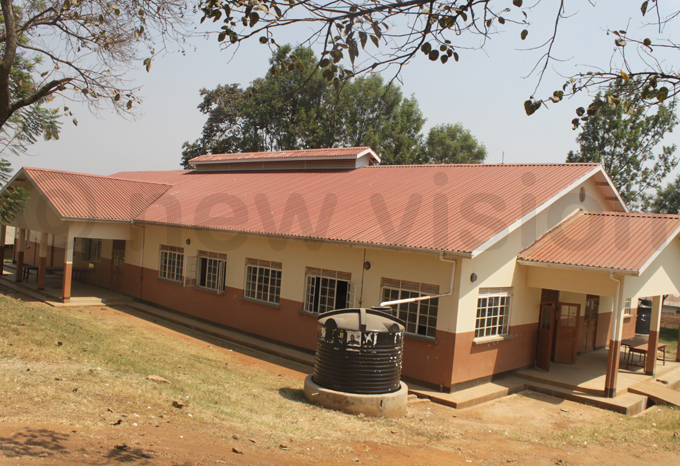 The new multipurpose hall at the school.

The school expects to jump back into the country cream of top schools in a short while. They are determined not to let laziness cripple into their hard earned history and achievements. It is in the school's history and hard work, they it expects to reap big in this moment of reclaiming their national status.

A number of people around Kabarole believe the school has never lost its legacy, much its performance may not be resounding in the country.

"Do you know the number of parents who would have loved to have their children go through this school, but couldn't?" asks a motorcyclists, whose two daughters go the same school?

Unlike most schools in its basket in Western region, it has a very high number of students, today standing at 1,038 students, and about 51 teachers.

Mugisa Osabe, who is one of the old students, and currently a teacher at the same school, says that nowadays the girls are exposed to role models in the country. "We want them to always interact with the successful people who have gone through the same school," she explains. 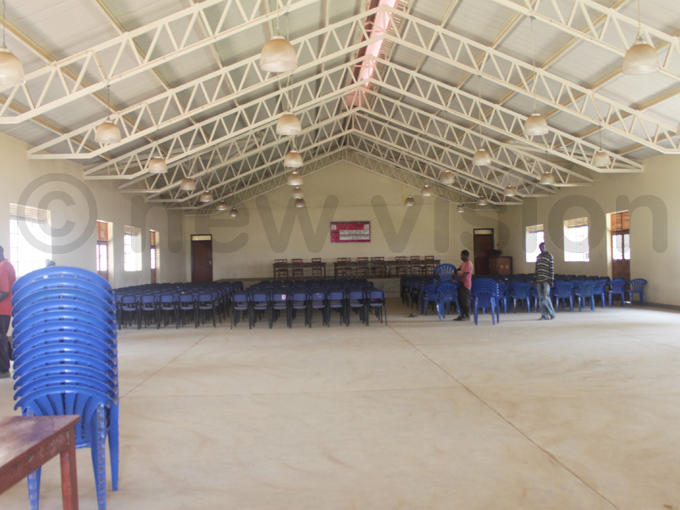 An interior view of the new multipurpose hall.

This is in addition to three career sessions for the whole school per team. Experts are called in, to conduct the sessions in the presence of the students' parents.

The school in 2008 also obtained a bus, which has raised the school profile.

With a new face lift of the school, the performance of the school is expected to keep improve. They might be slightly struggling, but they are not out.

The school benefited from the construction of a massive multi-purpose hall, a storied laboratory and another storied complex housing classrooms. All these new structures, were constructed just next to corner of the school compound, which also be housing the Chapel.

All the ADB and Government constructions were done at a tune of sh3.7bn.

A new multipurpose pitch is also under construction and much more needs to be done, to shield a huge amount of soil from being swept into the dilapidated dormitories by heavy rains. A strong shielding wall needs to be established urgently, near the new school pitch. New chapel which is under construction with support from President Yoweri Museveni and old girls of the school.

More so, the school now has its first ever incinerator, donated to the school under the same renovation project, which is supposed to make the school a ‘Centre of Excellence'. Most schools the country do not have incinerator, especially for the disposal of girls sanitary towels.

"Apart from the various buildings that have been constructed, it is great that the Government though of setting up an incinerator for us," says ………., a Senior Four students, who had come over at school to pick results for the national examinations she sat last year.

This girl, is just one of the 1,200 other girls in the school, who are appreciating the new contribution of the Government in giving Kyebambe Girls a new facelift.

With the Senior One admissions selection list of students pinned on the notice board, you can confidently argue that Kyebambe is indeed still an academic lioness in this sub-region. To be on this list of almost close to 100 students who will admit to Kyebambe Girls School this year, you must have scored aggregate 6 to 18.

This depicts how competitive this school still is, in attracting most of the best performing girls in Western Uganda and some other parts of the country. 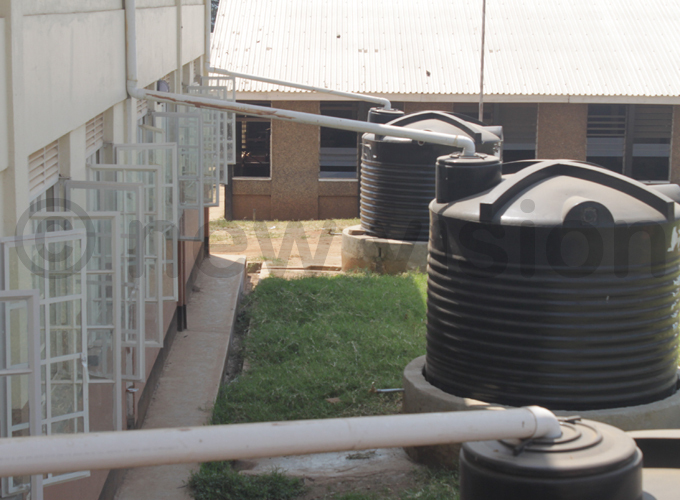 Water tanks provided under the Government and ADB project.

The school is already reaping big from the new constructions. The deputy headteacher Florence Mutwamu explains that, "Students are already in a good learning environment. We expect to excel as years go by," she explains.

In the past, most classrooms would accommodate 80 students, which but the numbers have been brought down to 60 students now. This means there is an improved teacher to students' ratio. The fewer students in class the better experts argue.

The school's Dean of studies Robert Keingana also argues that, "Students have better learning facilities and the population of the school can easily be stepped up now. This will offer us more resources and ability to improve our performance."

He adds that apart from our old teachers' houses, the new units will also help more teachers to stay near the school. "This helps them concentrate in their teaching job," he explains.

The school's board chairperson Grace Nyakahuma says that, "I'm convinced that the Government has helped us in getting more classroom space, teachers' accommodation and the main hall. Improvement in performance will take a process. But we know that the students will also be more focused and improve academically."

Nyakahuma is the Assistant Registrar, in charge of academics, at the Mountains of the Moon University.

With a new face lift of the school, the performance of the school is expected to keep improving. Much as the school might be slightly struggling academically, it is committed to conquer the skies.

Some of the old girls