Leaders acknowledge there is no silver bullet and face many obstacles over the next two days.

Turkish President Tayyip Erdogan makes a speech during his meeting with mukhtars at the Presidential Palace in Ankara, Turkey, March 16, 2016. (Reuters)

Leaders acknowledge there is no silver bullet and face many obstacles over the next two days.

BRUSSELS - Leaders of the European Union meet in Brussels on Thursday to agree on a deal to offer Turkey the following day that would secure Ankara's commitment to a scheme intended to halt migrant flows to the Greek islands.

A year into a crisis in which more than a million people have arrived in chaotic misery, many of them Syrian war refugees and most of whom come from Turkey via Greece to Germany via dangerous sea crossings and long treks, hopes have risen around the summit table that they may have found a way to at least slow the movement.

But leaders acknowledge there is no silver bullet and face many obstacles over the next two days, from howls of outrage that they plan mass expulsions of vulnerable people to a country with a patchy and worsening human rights record, to a lingering feud between Ankara and small but vocal EU member Cyprus.

"Work is progressing but there is still a lot to do," European Council President Donald Tusk wrote to leaders inviting them to the summit he will chair. After discussing the economy, the 28 EU national leaders will discuss the migration issue over dinner, starting around 8 p.m. (1900 GMT).

A breakfast is set for Friday with Turkish Prime Minister Ahmet Davutoglu, where Tusk hopes to finalise a deal which the Turkish premier first sprang on the EU, with backing from German Chancellor Angela Merkel, at a special summit 10 days ago.

Under the deal, which was set out in fuller fashion by Tusk in a draft for EU leaders on Wednesday, Turkey will, in addition to a previous agreement to try and prevent the smuggling of migrants via rafts, take back all those, including Syrian refugees, who do make it to Greek islands off Turkey's coast.

The draft, which was seen by Reuters, says the plan is "to break the business model of the smugglers and to offer migrants an alternative to putting their lives at risk". It stresses the plan is "a temporary and extraordinary measure which is necessary to end the human suffering and restore public order".

Potentially the most explosive topic, which diplomats say risks derailing the whole deal, will be how Davutoglu responds to a vague offer to open new "chapters" of Turkey's snail-like negotiations to join the EU at some distant future date. 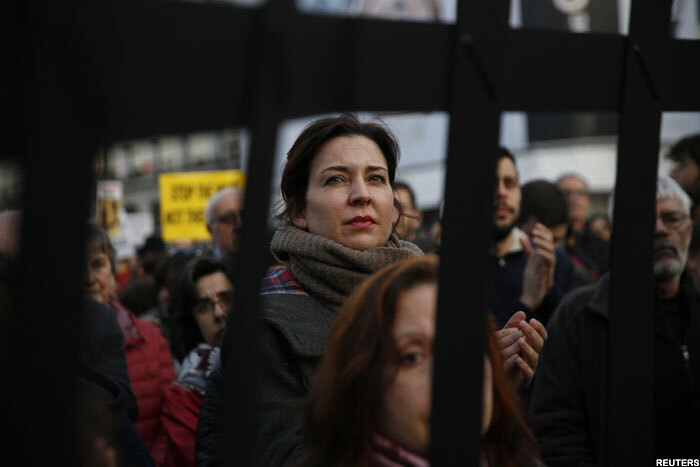 People stand behind a mock border fence during a protest against the EU-Turkey migrant deal in Madrid, Spain. (Reuters)

Several of these have been blocked by Cyprus over Turkey's refusal to give it the same rights as other EU states in access to Turkish ports and airports - a result of the 42-year dispute since the violent partition of the island into a Greek-speaking state and a Turkish-speaking north recognised only by Turkey.

Cypriot President Nicos Anastasiades has made clear he will lift his veto on Turkish accession chapters only if Ankara ends its refusal to recognise Cyprus. Turkey wants concessions for its northern Cypriot allies in return. The EU and world powers are keen not to derail U.N. talks that could reunite the island.

Tusk's draft says the EU would work with Turkey to "prepare for a decision" on opening new accession chapters "as soon as possible" - a hazy prospect Davutoglu may not appreciate.

But in his invitation letter, Tusk stressed that only if the migrant deal could help advance the broader talks on ending the long confrontation with Cyprus, could it hope to succeed.

To satisfy EU and international law, Greece and Turkey will have to modify domestic legislation so that Turkey is regarded as protecting asylum seekers in line with the Geneva Convention, even though Ankara limits its formal commitments to that treaty.

EU officials argue that the alternative to holding people back in Turkey is to see a further build-up of migrants stranded in deteriorating conditions in Greece, whose European neighbours have closed their borders. Already over 40,000 are marooned.

Legal gymnastics, and the scorn of U.N. and other rights bodies, aside, the deal foresees all those arriving having a right to state their case for asylum and to appeal.

However, EU officials stress that the intention is quickly to deter most people from even trying to make the crossing, so the arrival of thousands a day as occurred last year is unlikely. If such numbers keep coming, the plan will have failed, they say.

For each Syrian refugee who eludes efforts to stop illegal migration whom Turkey agrees to take back, Turkey will see a Syrian refugee resettled directly to Europe. The draft makes clear the total number is likely to be limited to about 72,000 out of nearly 3 million Syrians in Turkey.

That figure represents what the deeply divided EU states agreed last year to take in under two different schemes for sharing responsibilities. Leaders may talk more about who takes how many. Tusk's draft spoke of the process being "voluntary" in a nod to eastern EU states which oppose a series of refugees quotas Brussels imposed last year.

Longer-term, the EU leadership and the likes of Merkel are pushing hard for a system of resettling much larger numbers of refugees from the Middle East in Europe. That is opposed by others who say it would fuel xenophobic nationalism which has already surged, as seen in elections on Sunday in Germany.

Diplomats said there was also likely to be discussion of how quickly a second 3-billion-euro tranche of aid for Syrians in Turkey should be on the table for Davutoglu and of the precise details of an offer to provide visa-free travel to Europe for Turks by late June, if Ankara meets numerous conditions in time.