"Geothermal energy is clean, green, its carbon footprint on the environment is minimal."

Vapourised gases rise from a condensation plant at ol-Karia 1-AU's (Addittional Unit) at the ol-Karia geothermal power generation complex that lies on the floor of the Kenyan Rift Valley, near the shores of Lake Naivasha

"Geothermal energy is clean, green, its carbon footprint on the environment is minimal."

Zebra and antelope look on as clouds of white steam twist into the air at Hell's Gate, where Kenya's dream of providing cheap, renewable electricity is becoming a reality.

Just over a third of the 45 million people who live in Kenya have electricity, and power cuts are frequent across the network, even in the capital Nairobi.

But Africa's Great Rift Valley -- where the continent is gradually tearing apart and the earth's crust thins -- runs through the heart of Kenya, and access to hot rocks below the surface has put a wealth of geothermal power at its fingertips.

"Geothermal energy can be found probably anywhere in the world. But what makes it most accessible here is the fact that the Earth's crust is very thin, so the steam comes out very easily and hence you can use it for electricity generation," says Boniface Kipkorir, an engineer working at the Olkaria plant in Hell's Gate National Park.

Since geothermal energy production began in Kenya in the 1980s, the technology has evolved to help make it a cleaner process.

The region's underground is a geothermal hotspot, harbouring hot water sources and steam at 300 degrees Celsius (572 degrees Fahrenheit) that is piped up to the surface from depths of up to 2,000 metres (6,500 feet).

When the mix reaches the plant, the steam powers a generator turbine.

Boosting electricity is a key priority for the Kenyan government, which is aiming to triple production capacity by 2020 to compensate for demand that is forecast to increase by 11 percent annually.

The potential is immense. There are more than a dozen possible sites scattered throughout the Rift Valley which have an estimated potential of 10,000 megawatts (MW) -- four times the country's current production capacity. 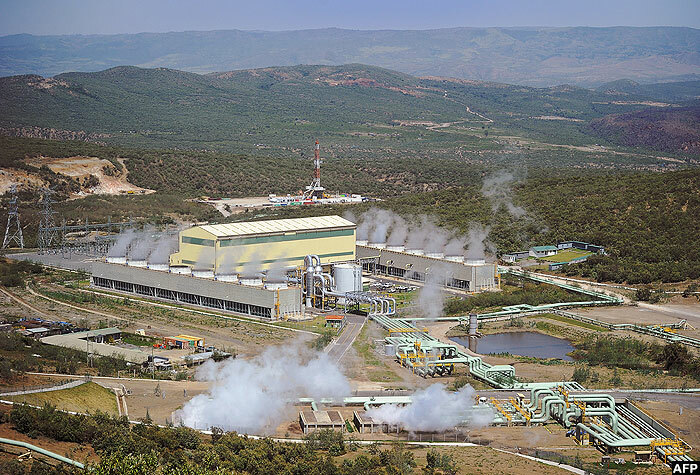 Development of those sites could make Kenya one of the world leaders in geothermal energy.

Last year, with the installation two new production units at Olkaria, Kenya more than doubled its production of geothermal energy to 609 MW.

That makes it the world's eighth-largest geothermal producer, accounting for some five percent of global output.

Olkaria, which lies 120 kilometres (75 miles) northwest of Nairobi, is the largest geothermal plant in Africa. Surrounded by wooded hills which are home to giraffe and antelope, the plant has a network of pipes that run deep underground.

During its construction, the animals were scared off, but soon found elsewhere to roam inside the national park, which covers 68 square kilometres (26 square miles). Now buffalo, zebra and antelope come close to the station, apparently unconcerned by its presence.

Steam rises into the air, but it is water vapour -- there is no pollution or stench like that of a coal-fired station.

For many years, Kenya has relied on its hydroelectric network, which last year produced 820 MW. But recurring droughts have rendered this source of energy much less reliable than before.

"When we looked at the hydro, we realised it's very good, because it's a very cheap source of power -- but it is also affected by drought," says Albert Mugo, KenGen's chief executive.

"In the last two years, we've had very bad drought and the levels of the reservoirs became very low. When that happens, you have to reduce the amount of electricity that you can generate."

"It is not the same with geothermal," Mugo says. "Once you have your wells and you start producing, the plants run on a 24 hours basis. It's a very reliable source of supply."

The growth of geothermal energy is expected to continue, while hydropower production levels out.

"There is more geothermal that is being installed and very little of hydro," he says.

"So looking at the strategy for Kenya for development... we see a lot of geothermal coming in," he says.

According to its "Vision 2030" plan, under which this East African nation will become a middle-income country by 2030, the Kenyan government sees electricity production capacity reaching 17,500 MW, compared to 2,200 MW in 2015.

The aim is for 5,000 MW of that figure to come from geothermal energy, which would make it the country's primary energy source in a move that could help reduce costs to customers.