Kansiime to deliver her all at maiden show
Next Story

In an enclosed e-mail, Stephen O'Brien, the Under-Secretary General for Humanitarian and Emergency Relief Coordinator, invited Angella Katatumba to the “invite-only”| forum which is slated for May 23 and 24, 2016 in Istanbul, Turkey.

In an enclosed e-mail, Stephen O'Brien, the Under-Secretary General for Humanitarian and Emergency Relief Coordinator, invited Angella Katatumba to the “invite-only”| forum which is slated for May 23 and 24, 2016 in Istanbul, Turkey.

Under her charity organisation, the Angella Katatumba Development Foundation (AKDF), the talented "Mulago Yaffe" singer has been invited to attend the first ever World Humanitarian Summit.

In an enclosed e-mail, Stephen O'Brien, the Under-Secretary General for Humanitarian and Emergency Relief Coordinator, invited Angella Katatumba to the "invite-only"| forum which is slated for May 23 and 24, 2016 in Istanbul, Turkey.

The World Humanitarian Summit, an initiative of UN Secretary-General Ban Ki-moon, will be held at the highest level to reaffirm the UN's shared responsibility to humanity, and to agree to a concrete set of actions to enable all stakeholders - including leaders of governments, humanitarian organizations, affected populations, and the private sector - to better prepare for and respond to humanitarian crises. Angella Katatumba at a children's special unit at Mulago hospital

Katatumba is one of the few local artistes who have exhibited steadfast commitment to using her celebrity to better the lives of others. She uses her music to tackle issues like wars, peace, love care and conserving the climate.

Earlier this year, through AKDF under the Mulago Yaffe campaign, she personally donated sh10m to Mulago Hospital Special Care Unit. The money is to buy a Phototherapy Machine and a Syringe Pump.

The machines, according to Dr. Jolly Nankunda, senior consultant, Pediatrics, at Mulago Hospital, treats a yellow discoloration (neonatal jaundice) in newborns. If not treated, the condition can cause brain damage.

There are only six of such machines in a hospital that requires 20 to handle the volume of newborns admitted in all its wards.

As Dr. Nankunda put it: "the two machines will reduce on the waiting time for babies. Sixty more babies will receive medical care every week thanks to Katatumba's generosity." 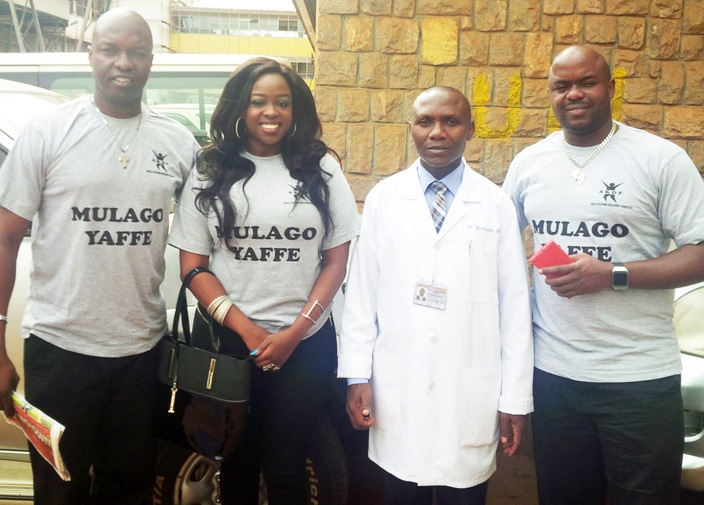 Angella Katatumba at Mulago hospital for the Mulago Yaffe project

The Multiply By 2 singer launched the Mulago Yaffe campaign in 2015 in partnership with Mulago National Referral Hospital.

The Project is geared towards raising awareness and standards of sanitation and healthcare facility services in Uganda, starting with Mulago National Referral Hospital.

It set off with Katatumba mobilizing donations and services that were delivered to Mulago Hospital.

Under the initiative, businessman Gordon Wavamunno, donated brand new clothes, blankets and other items to the Maternity Ward of Mulago Hospital. 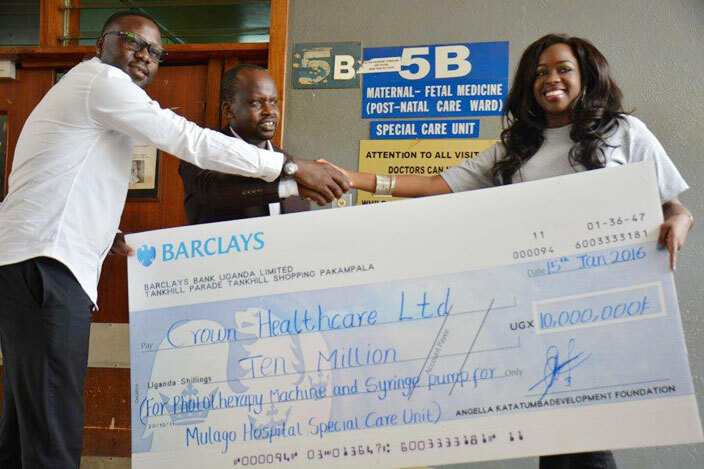 How it all started

Her commitment to humanitarian work dates back to the days of the much acclaimed "For you Gulu" project which rose awareness and support to help the people of northern Uganda in the wake of the Lord's Resistance Army (LRA) war in 2005.

In 2010, the British Council appointed her as the International Climate Change Icon in Uganda.

Katatumba composed a song ‘Let's Go Green' which was used to promote the organisation's campaign of the same name.

The British Council is the United Kingdom's international organisation for cultural relations and educational opportunities.

At the time, the British Council partnered with Makerere University to re-green Uganda, starting with 30 million tree seedlings in two years. Under the deal, Makerere University used the Biotechnology Laboratory at the university's main campus and the Tissue Plant Laboratory at Kabanyolo to grow the tree seedlings which were offered to residents willing to plant them around the country free- of-charge.