Minister Rose Akol says government also received intelligence that some of the attackers are part of a bigger group.

Minister Rose Akol says government also received intelligence that some of the attackers are part of a bigger group.

Police is investigating Thursday's suspected tribal clashes in which some security personnel were injured and seven civilians killed in Hima town, Kasese district.

In a press briefing Saturday, Minister of Internal Affairs Rose Akol appealed to the people of Kasese in particular and the entire population to remain calm amid the investigations.

According to Akol, the clashes included an incident where a civilian gang armed with machetes, knives and other crude weapons attacked soldiers.

"We are aware that some of the attackers harbor sectarian tendencies and are thus a threat to the community. Some of the community members have already given very vital information to the police regarding this," she told journalists.

The minister said government had also received intelligence that some of the attackers are part of a bigger group that believe in selfish reason to break away and form the so called Yiira Republic.

On Friday evening, while trying to establish an operational base, Commissioner of Police Jacob Opolot (Commissioner of Field Force Police in the region) was also attacked and sustained a leg fracture.

Akol told the press that Opolot is steadily recovering but his bodyguard SPC Joel Mbusa who was stabbed in the head and chest still remains in critical condition. His gun that was previously stolen was also recovered. 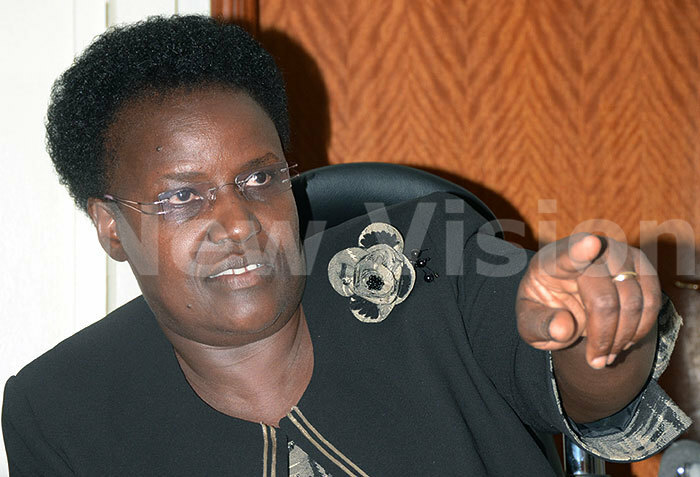 Akol warned that any citizen who acts contrary to the established laws will be dealt with.  (Credit: Richard Sanya)

Other officers injured include Robert Rwotsongeyo, Robert Otobe, Moses Sentongo (all at the rank of corporal) and four soldiers of the Uganda People's Defense Force (UPDF) who were reinforcing.

Akol said five of the attackers were put out of action.

The Inspector General of Police Gen Kale Kayihura is currently in Kasese assessing the situation.

Early this week, President Yoweri Museveni reminded some of the leaders in Kasese of the constitution that guarantees all Ugandans to enjoy their rights and outlaws sectarianism.

"Uganda is one country with freedoms of association and belonging, rights that are bestowed upon Ugandans by the Supreme Constitution," he said.

Second division UPDF spokesperson Maj Ronald Kakurungu (pictured), in Kasese, condemned the attack on soldiers and policemen in the clashes

Meanwhile, Minister Akol urged the public to report and give timely information to security personnel on ground as regards the incident.  But she warned that any citizen who acts in a manner contrary to the established laws will be dealt with.

The Police and UPDF have since tightened security, with thousands of personnel deployed to ensure safety in the area.

However, with the visible security deployment, several people have fled from the town (Hima) for fear of further clashes.

The Rwenzori region has been hit with tribal clashes in the past, with the latest being last month after the Police launched a probe against the Obundhigya Bwa Bamba king Rtd Lt. Col. Martin Kamya for allegedly orchestrating the February 24 tribal clashes in Bundibugyo district.

In 2014, over 100 people were killed following the tribal clashes that rocked the region.

Kanyeihamba has broken the impartiality code