South Sudan is dying, and nobody is counting

FEB 26, 2016: Akki Adduok, a displaced woman residing in the Protection of Civilians (PoC) site in Malakal, South Sudan, sitting in the spot where her shelter used to be.

The many ways people have died during South Sudan's two-year civil war are well-documented, but the number killed is unknown.

Men, women and children have been shot, speared, burned, castrated, hung, drowned, run over, suffocated, starved and blown up, their corpses abandoned where they fell, bulldozed into mass graves or, in at least one case, eaten in ritual cannibalism.

But the UN has stuck to a guesstimate of 10,000 dead since the early months of the war, even as the killing escalated and spread across the country.

A year into the war, in November 2014, the International Crisis Group (ICG) which has closely tracked the fighting, told AFP at least 50,000 had died.

This month, the UN finally caught up, quoting the same figure but over a two-year span.

Sudan expert Eric Reeves, a professor at Smith College in the US, said failure to count the dead was a failure of morality.

"If we give up on establishing mortality estimates we are, in one way or another, saying that the lives don't really count," he told AFP.

Aid workers and officials who did not want to speak on the record said the true figure might be as high as 300,000 -- a figure comparable to the number killed in Syria during five years of fighting.

January 27, 2014: Sheets covering the bodies of 16 people,  allegedly civilians killed when they took cover near Leudit church in Bor town, according to the South Sudanese military

"The level and intensity of violence has been above and beyond what we have seen almost anywhere else," said one worker for an international aid agency which operates in multiple conflict zones, and who asked not to be named. Over 30 aid workers have been killed since war broke out in December 2013.

The minimum figure of 50,000 is of those killed in direct conflict, but if those killed as a consequence of war are included the numbers skyrocket.

That would include starvation from aid blockades, such as the 40,000 people the UN warned last month were in "catastrophic" conditions -- potentially famine, if the areas were not too dangerous to gather the data needed to declare it -- as well as documented atrocities such as civilians suffocated in shipping containers.

It would also include those who died due to lack of healthcare following the targeted destruction of hospitals.

Doctors Without Borders (MSF) has warned of "far-reaching consequences for hundreds of thousands of people" with six of its clinics and hospitals attacked, looted or torched -- sometimes repeatedly.

In terms of health, easily preventable and treatable malaria has become the biggest killer, according to World Health Organization (WHO) morbidity statistics. The UN says recent malaria levels are "unprecedented" with numbers doubling, even quadrupling in some areas, from previous years.

Multiple armed forces have carried out ethnic massacres, and these are no low-level bush war skirmishes. 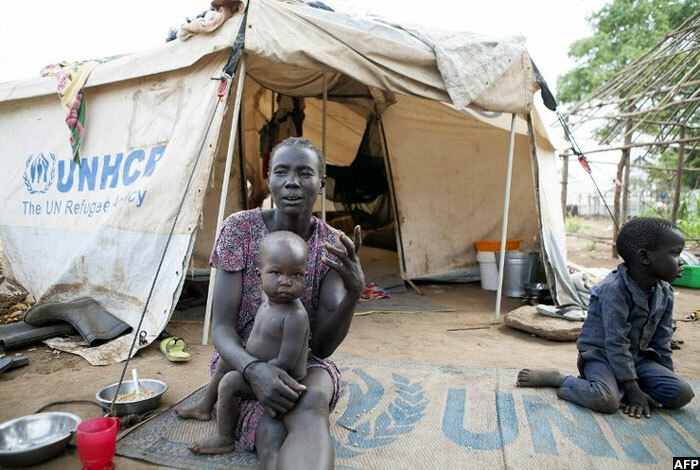 July 10, 2014: A woman and her children displaced by fighting in South Sudan sit outside her tent at the Kule camp for Internally Displaced People at the Pagak border crossing in Gambella, Ethiopia

Battles have been fought with modern weaponry, including helicopter gunships, rocket launchers, heavy artillery and amphibious tanks able to hunt down rebels into once isolated swamps. State capitals have been razed.

Some figures are clearly documented: 2.3 million people forced from their homes, 6.1 million in need of emergency food aid, 15,000 child soldiers recruited, 200,000 civilians sheltering inside UN 'Protection of Civilians' camps, or the $1.21 billion the UN needs in funding.

But deaths go largely unrecorded. "We've lost count," UN peacekeeping chief Herve Ladsous said this month although no one -- including the 14,000-strong UN peacekeeping force -- ever kept a tally.

A UN Development Programme (UNDP) survey -- based on over 1,500 interviews across the country -- reported 63 percent had a close family member killed.

In the worst battle zones, the figures are even higher. Questionnaires conducted by the South Sudan Law Society (SSLS) in the UN peacekeeping base in the north-eastern town of Malakal -- home to 47,000 people fleeing conflict -- found the number with a relative killed was 77 percent.

Another UN study in the northern Unity region, described its findings as "shocking": almost three-quarters of deaths recorded were from violence.

Of the 10,553 deaths examined, 7,165 of those were from violence, plus a further 829 people who drowned in swamplands, where many hide from fighting.

"Documenting the impact of war is also important for recovery processes, including accountability, reconciliation and healing," the January report read.

Analysts say the failure to clarify a clear toll dishonours victims, contributes to South Sudan's suffering staying off the international radar and enables impunity for the killers.

As war drags on, despite an August peace deal, the evidence of those killed is rotting away.

Human Rights Watch, which documented mass graves in the eastern town of Bor in January 2014, warned that, "evidence is literally disappearing into unmarked graves."

Hot Pool faces off with Club Klein in Masaka