The Kayunga district returning officer has withdrawn from conducting the LC3 elections after reportedly being attacked in the previous polls.

This was after the just-concluded district (LC5) polls that sparked off chaotic episodes when four defeated contestants are said to have attacked Ruth Nakachwa Kibuuka and blocked her from declaring the winner - Tom Sserwanga.

They reportedly accused the independent candidate (Sserwanga) of involvement in election malpractices.

Nakachwa's withdrawal led Electoral Commission (EC) boss Eng Badru Kiggundu to travel to Kayunga and hold a closed-door meeting with leaders of political parties in the district and the elected MPs.

The meeting, held at Hotel Katikomu on Tuesday, was meant to forge a way forward.

Kiggundu announced Henry Makabayi as the new returning officer - charged with conducting the LC3 elections - in a meeting that lasted about four hours.

EC spokesperson Jotham Taremwa told journalists after the meeting that its main purpose was to resolve disagreements between district leaders that arose after the LC5 election exercise.

"Some people filed a petition against one of our staff [Nakachwa], accusing her of taking sides and as a commission we had to come in to solve the problem," said Taremwa, urging the people of Kayunga to be calm and peaceful. 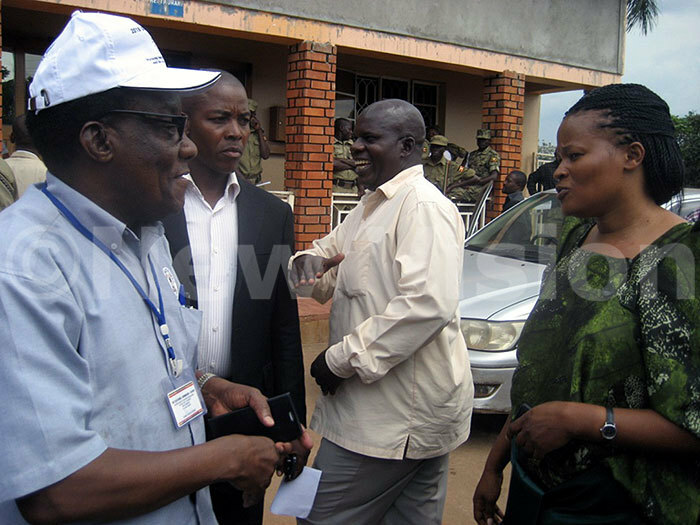 On her part, Nakachwa said she had not resigned, calling rumors claiming so "baseless".

"There is a difference between withdrawing and resigning. During the meeting, the EC chairman Eng. Kiggundu made it clear that I still remain the district registrar though I am not going to perform the duty of the returning officer," she told New Vision.

"I asked my bosses to withdraw from conducting the remaining electoral cycle after being attacked as I declared results of the LC5 chairperson and they accepted my proposal."

She said her withdrawal was intended to give a chance to her critics to have someone else who will conduct the remaining elections.

The NRM district chairman, Moses Karangwa, thanked the Electoral Commission for the swift reforms, saying they are now assured that the LC3 polls are going to be free and fair.

"We are now happy that the Electoral Commission has respected our petition because Nakachwa has been taking sides while executing her duties," he said.

However, state minister for lands Aidah Nantaba pleaded for Nakachwa, saying those against her do it because she is "a straightforward person who does things in the right manner".

Child has hole on forehead after maid tortures her

Kayunga Imam comes face-to-face with his 'bride' in court...