Leave politics, back to your restaurant, K...
Next Story

Snow on the Rwenzori Mountain could once be seen on a clear day from as far as Fort Portal.

Environmentalists have expressed a lot of concern over the high melting rate of the glaciers atop the Rwenzori Mountains.

Located in the western part of Uganda lies the great Rwenzori Mountains also known as the Mountains of the moon, the snowcapped major tourism attraction.

"We have been monitoring the rate of the melting of ice on top of the mountain and the rate at which it is melting is alarming but I should say that it is as a result of climate change," said John Magezi an environmental expert who led a team of researchers on the mountain.

He said that Uganda has severely been ravaged by the climate change and warned that in a few decades to come the ice on top of the Mountains of the moon might be no more.

"The frequency of hot days in the country has increased significantly while that of cold days is decreasing that is clear and strong evidence indicating that Uganda is experiencing effects of climate change," added Magezi.

The continued melting of glaciers on the Rwenzori Mountains over the years and now even at an accelerated rate clearly indicates a rise in temperature and consequently, climate change. 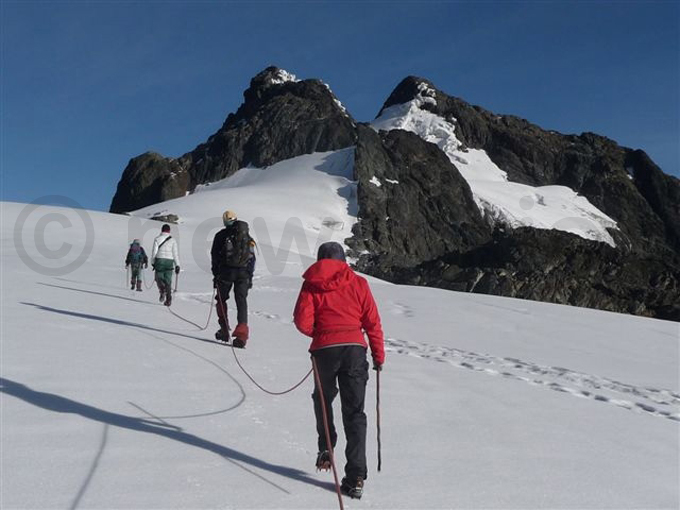 Magezi attributed the glacial recession to higher air temperatures and less snow accumulation and warned that some animal species on the mountain might face extinction because they had adapted to the cool climate but now the climate is changing.

"Some animal species which have been used to the cool climate of the mountains could face extinction in the near future because it is becoming hot.

Jimmy Tumwesigye a project officer with ECOTRUST said they are also promoting afforestation on private land within the surrounding communities near the Rwenzori Mountain National Park under its community-based carbon setting scheme ‘Trees for Global Benefit'.

This scheme supports the integration of tree planting in the livelihood strategies of small-scale landholder farmers using carbon credits.

"We are working with the communities near the national park and we have now conserved the gateway to the Rwenzori National Park because all the natural vegetation had been cleared," added Tumwesigye.

The glaciers occur on only three peaks of the ranger's peaks, Mt Stanley, Baker and Speke.

According to the Global Outlook for Ice and Snow 2007, if they continue to recede as they have since 1906, some experts warn that they will be gone in the next few years.

The man who brought up Nagginda