NEMA urges public to say no to plastic bags
Next Story

Over 10,000 displaced by Bundibugyo clashes

6,233 people have camped at Bubukwanga Sub County headquarters, 2,012 are camping at Harugali while 3,219 are at Kityo SDA church

Women carry their belongings on their way to Bundibugyo town following the clashes. Photo by Geoffrey Mutegeki

6,233 people have camped at Bubukwanga Sub County headquarters, 2,012 are camping at Harugali while 3,219 are at Kityo SDA church

Over 10,000 people have been displaced in Bundibugyo district following post-election clashes that left nine people dead and four others injured.

Majority of the displaced women and children have moved into three different camps in Bundibugyo district.

6,233 people have camped at Bubukwanga Sub County headquarters, 2,012 are camping at Harugali while 3,219 are at Kityo SDA church.

According to Rev Geoffrey Kyomuhendo, the Prime Minister of Obudhingiya termed the situation as a crisis.

"We are in a very big crisis; people continue running away from their homes and are now in thousands in camps without any help," Kyomuhendo said.

He called upon well-wishers to intervene and offer help to the people.

"They need humanitarian help; they are lacking food, and other basic requirements," Kyomuhendo said

The post-election clashes in Busaru Sub County, in Bundibugyo caused a lot of fear among the population leading to people running away from their villages.

According to Lydia Tumushabe, the Rwenzori region police spokesperson, people are running away from homes because of fear. 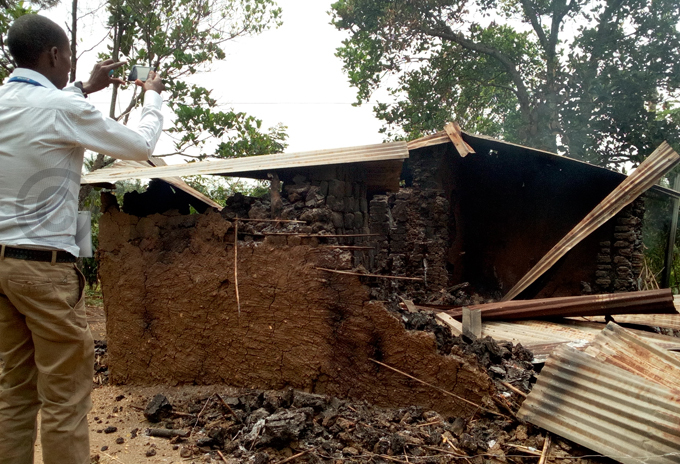 A house that was burnt down in Busaru Sub County. Photo by Geoffrey Mutegeki 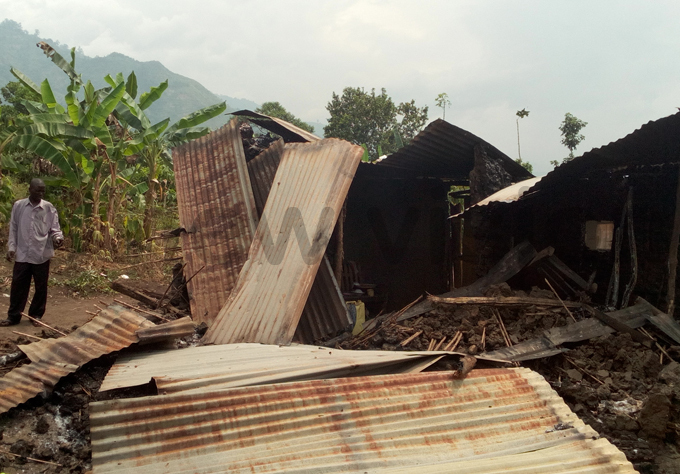 "We have put the situation under control, but people are still fleeing because of fear. Even seeing the presence of security personnel people think the situation is bad," Tumushabe said

The Saturday morning clashes began when the district registrar Daniel Nayebare announced Ronald Mutegeki as the winner of the Bundibugyo district LC5 seat.

Police named the dead as Taddeo Mugisa who was killed together with his family of four, Nickson Bwambale who was shot dead and Jane Karungi who was killed with her five year old son.

Mutegeki (NRM) was contesting in the race with Jolly Tibemanya the incumbent who was standing as an independent.

The district registrar on Thursday announced Tibemanya as the winner of the race with 33,012 votes against Mutegekis's 32,374 which sent his supporters in jubilation.

The cheerful mood of Tibemanya's supporters was short-lived when at around 3PM on Friday the returning officer declared Mutegeki the winner.

This heightened the tensions that had prevailed in the district during the campaigns.

The eight who included six men, a pregnant woman and her five year old son, were killed on Saturday morning.

That morning, a group of about 30 people armed with sticks, pangas and spears appeared in Bukundu village according to eye witnesses and started killing people.

Police together with the army were immediately deployed to curb the situation. Police have arrested 12 people for their alleged role in the killings.

Although the clashes might have been instigated by the results majority of the people in Bundibugyo believe that it has a tribal element.