Politicians in Kasese, losers and victors in the just-ended parliamentary and LC 5 elections alike, have urged their supporters to be calm and unite for development's sake in the area.

All the six parliamentary seats in the district were taken by the opposition FDC in the February 18 polls.

The Constituencies of Busongora South, which was represented by Boaz Kafuda (NRM) and Bukonzo West under NRM strongman Dr Chrispus Kiyonga (also Defence Minister), were captured by Godfrey Katusabe (not Katushabe) and Jackson Mbaju Kathika respectively.

With Geoffrey Sibendire Bigogo (FDC) also unseating the incumbent district chairman, retired Lt Col Dula Muhindo, the opposition has also grabbed 28 of the 52- member District Council slated to swear into office this May. 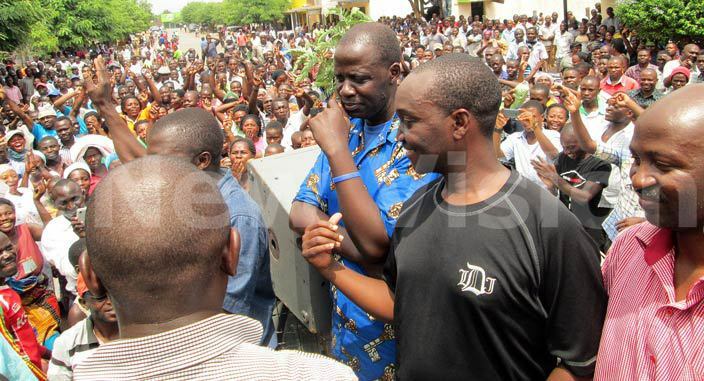 The new Kasese FDC political team on a Kasese street during a procession to celebrate their victory in the parliamnetary and local council elections. Photo by John Thawite

Bigogo said that the district had developed a crack of regionalism, ethnicity, religious and political ideologies.

"I want to end the animosity that has divided out people along regionalism, religion, tribalism and even political affiliation," Bigogo promised.

He further pledged to address land-related inequalities which have often exploded into conflicts sometimes resulted in bloody clashes between the pastoralists and the cultivators.

On 5 July 2014, a group of people claiming to be Rwenzururu youth wingers, locally known as Esyomango sy'Obusinga Bwa Rwenzururu, attacked Bundibugyo and Kasese, killing 11 residents of Bigando village in Kitswamba subcounty, Kasese and scores of others in Bundibugyo and Ntoroko.

Dozens of the attackers were also killed when the raided military installations in Bundibugyo and Ntoroko.

The Kasese residents are also divided over whether or not Kasese, with a population of over 700,000 people and occupied by mainly the Bakonzo, Basongora and Banyabindi, should be split into more districts. 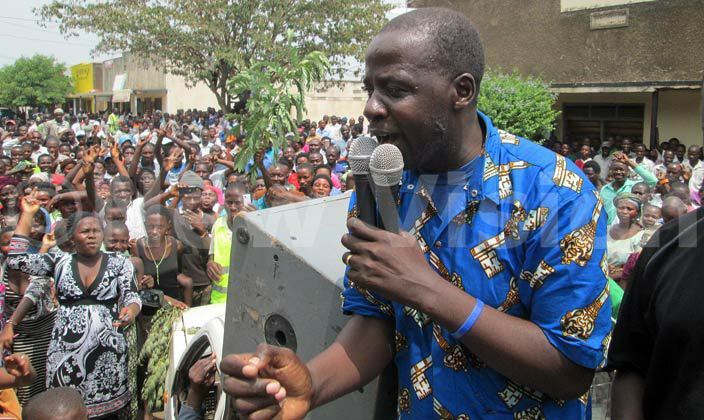 In 2010, the District Council, led by Rev canon Julius Bwambale Kithaghenda, passed a resolution proposing that three district be created with borders running from the mountains to the lower lands to enable all residents share the district's resources.

But it is alleged that the mainly pastoralist Basongora  have been  saying the district should be split along the main highway between Kasese-Kabarole Rwimi border and the Kasese-D.R Congo border.

"I will go by the wishes of the residents and the guidance of the Rwenzururu establishment," Bigogo said.

Elphaz Bukombi Muhindi, who came third in the race for the LC5 seat with 20,338 votes, conceded defeat and pledged to support Bigogo, noting that he could not reject the choice of the people of Kasese.

"The elections have been very peaceful. As a person I respect the choice of the people," Muhindi said. 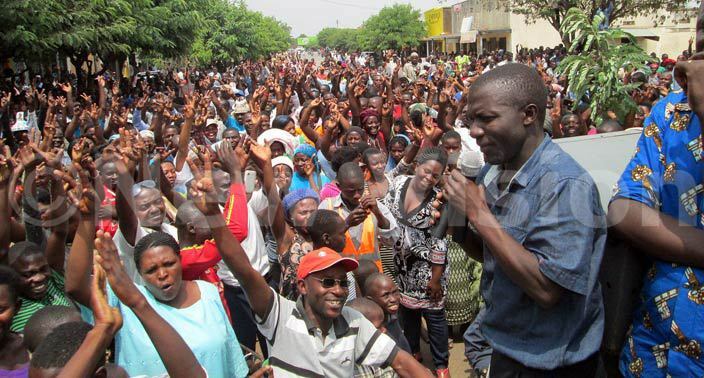 But he urged the new district leadership to lead through consultations with even those of divergent views.

"I also appeal to Mawa to respect the people's verdict," Muhindi, who is also the South Rwenzori Diocesan St Paul's Cathedral head of laity and founder of Rwenzori School of Nursing and Midwifery, said.

He urged his supporters to be calm, saluted his defeater, Robert Centenary Franco Bwambale and congratulated him upon reaching victory.

"Let us be calm," Kambale said but warned the FDC supporters against hate language.

He urged both the NRM and the FDC supporters to concentrate on programs aimed at uniting and developing the residents.

Retired Lt Col Mawa Muhindo, who lost the LC 5 race, could not be contacted because both his Airtel and MTN phones were off when New Vision tried to call them.

Heal the wounds of those who lost

After the losing the Bukonzo West seat FDC's Godfrey Katusabe, Dr Kiyonga called for calm among his supporters, urging them to return to their routine duties but continue mobilsing for the NRM party.

Bigogo also "I will work with the sitting (NRM) government to ensure our people get the services they need," Bigogo told New Vision shortly after being declared winner.

He said his immediate focus will be to carry out a situation analysis of the district service delivery with a view to improving education, water supply and uniting the people.

The mayor Kasese municipality, Godfrey Kabyanga, advised the Kasese district MPs-elect to heal the wounds of those who lost by indiscriminately leading the people in the district.

Addressing the media, Kabyanga, commended the NRM government for ushering in democracy, which has enabled the opposition to compete with the ruling party.

"Focused leadership comes from God but unity of the masses is paramount," Kabyanga said.

The NRM publicity secretary for Kasese district, Johnson Kamalha, said that Kasese required the newly elected leaders to bridge the gap between the local population and central government.

The Kasese district Chairperson Lt. Col. Mawa Muhindo has congratulated President Museveni and the FDC Mps in Kasese for successfully passing through the previous elections.

He made the remarks while addressing members of the press in Kasese town today.

"One of the lessons I have learnt from these campaigns is that no matter how long one has been in leadership, there are always new things to learn," she said after being declared winner for the third term running.

Dr Kiyonga's parliamentary successor pledged to serve all the people of Bukonzo West constituency equally regardless of their political differences.

"As our slogan suggests, we are people and one country," he said.

But addressing their supporters Thursday after the elections to the District Council, the FDC top leaders told supporters to also grab the Kasese mayoral seat from incumbent Godfrey Kabyanga.