Incidentally, Omach and his rival Ongeirtho are relatives

Omach leaving court on Thursday after the case was adjounred. Photo by BENEDICT Okethwengu

Incidentally, Omach and his rival Ongeirtho are relatives

The ruling in a court case in which Fred Jachan Omach, the state minister for finance, is seeking an order for a vote recount for Jonam County parliamentary elections has been set for Friday, 26.

The case is before Jeniva Natukunda at the Nebbi Chief Magistrate's Court.

This follows a long day legal battle between Omach and Emmanuel Ongeirtho, through their lawyers on Thursday. Omach with his lwayer Alaka(c) at Nebbi court premises on Thurday. Photo By Benedict Okethwengu

Omach filed a petition seeking an order for a vote recount on Tuesday, 23, after losing to his fierce rival of oppostion FDC party.

In the petition, Omach argued that most of his valid votes were declared invalid, giving ground for his opponent to beat him.

Omach, who has been the MP for Jonam County since 2001, lost to Ongiertho by a margin of 283 votes.

In the affidavits, he also argued that his agents were chased from polling stations and there were a lot of irregularities in the counting, and tallying of the results. 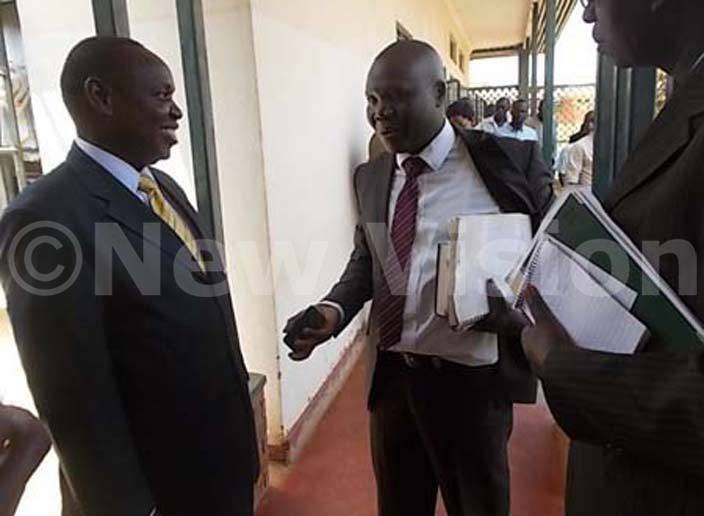 Omach with his lawyer Alaka (c) at Nebbi court premises on Thurday. Photo By Benedcit Okethwengu

Ongeirtho's lawyers, however, rebutted the claim in the affidavit, saying that they were mere hearsay not supported with substantial evidence.

Natukunda adjourned the case for ruling On Friday.

"I have had from the two parties I now ask you to return on Friday at 9:00am for ruling," She ruled.

Both Omach and Ongiertho, were present in court during the hearing while Electoral the Commission was represented by Raymond Kisaarale, the returning officer.

Drama, however, unfolded when Ongiertho declined a handshake from Omach.

Omach, who entered the court hall spotted his rival, and walked over to shake his hand but the latter dodged it smartly, signaling deeper growing bad blood between the two political heavy weights of Jonam County.

Incidentally they are relatives. Tusime urged court to dismiss the application with costs.

Tension however remains high with heavy presence of regular police, UPDF and anti riot police in Nebbi Town and Pakwach Town council ahead of the ruling.

FDC to sue police over harassment