New Kyoga ferry to take only 30 minutes across the lake

Traders and district officials have welcomed the second ferry, saying it will reduce the cost of doing business.

Traders and district officials have welcomed the second ferry, saying it will reduce the cost of doing business.

Donato Eswilu jeered on sighting the long queue of vehicles waiting for MV Kyoga I, the only ferry that plies the Zengebe - Namasale route across Lake Kyoga. Frustrated, he made a U-turn to take the longer Nakasongola - Lira route to Soroti, a distance of almost 400 kilometres instead of the 200 kilometres if he had used the ferry.

On the fateful December 23, 2014, the Uganda National Roads Authority (UNRA) staff and security stood helpless as drivers of the over 30 vehicles struggled to be among the 16 units the ferry could take on its last trip.

Several vehicles were damaged in the process.

Several people who missed cursed and swore never to use the ferry again. A decision had to be taken for the ferry to make a fifth trip instead of the official four return trips.

The chaotic scenes usually characterize the first ferry trip at 5:45am from Namasale in Amolatar district and the last trip at 5:30pm from Zengebe in Nakasongola district.

Missing a trip means waiting for another two-and-a-half hours or taking a much longer route for those who cannot afford to wait. However, all this is now bound to end with the introduction of another ferry, MV Kyoga II.

The second ferry now being assembled at Namasale will be faster, making nine nautical miles (16.7km) an hour, twice the speed of the current ferry, according to officials and available information. 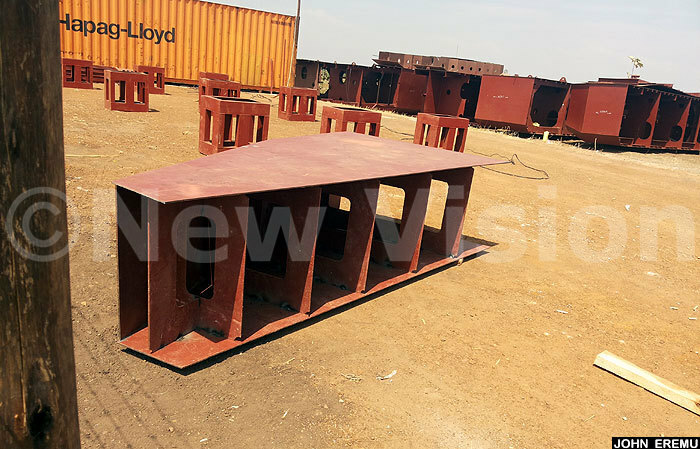 The MV Kyoga II is being assembled at Namasale pier

The existing ferry, MV Kyoga I, launched in 2012, travels at 4.5 knots (8.33kms) an hour and takes one hour and 10 minutes to cross the 9.1km lake stretch from Namasale to Zengebe.

"At nine knots per hour, the new ferry will cover the distance in about 30 minutes," said a Uganda National Roads Authority official who preferred anonymity.

A huge billboard at Namasale pier, where the $3.7m (sh12.95b) MV Kyoga II is being assembled indicates that the RO RO (Roll On Roll Out) vessel will be propelled by two powerful engines, each with 400 HP (hosepower).

The new ferry, scheduled to be completed in three months is expected to reduce waiting time from two hours and twenty minutes to under an hour. It is not only expected to boost trade across the lake but also reduce chaotic scenes that usually characterize the loading process wherever vehicular traffic outstrips capacity.

Traders and district officials have welcomed the second ferry, saying it will reduce the cost of doing business.  The Zengebe - Namasale ferry serves the neighbouring districts of Kaberamaido, Dokolo, Amuria and the western part of Soroti. For instance, it has cut by almost half, the road distance to Kaberamaido and Dokolo.

An artistic impression of the new ferry

Judith Acana, the Amolatar district women councilor appreciated the second ferry but appealed to the Government to improve the roads in anticipation of increased vehicle traffic.

"The current road is narrow and has proved more hazardous to the community because accidents occur almost on a daily basis," said Acana.

"With just one ferry, the volume of traffic is too high. This is likely to double with the second ferry. To avoid accidents, the road should be upgraded to either tarmac or widened into a first class murrum where two vehicles can easily bypass each other," she added.

Tony Onaba, trader from Kaberamaido, says he now just needs 20 litres of fuel to reach to Kampala unlike in the past where one would need not less than 50 litres to cover the almost 400 kilometres to Kampala via Soroti.

"Even business has improved. We now see many trucks from Kampala abattoirs coming this way to buy livestock, especially cattle. Most items we would come to buy from Kampala are also now locally available due to improved transport," said Onaba.

With reduced distance, the vehicle wear and tear as well as the carbon footprint has reduced by a similar percentage. Carbon footprint is the total amount of greenhouse gases produced to directly and indirectly support human activities, usually expressed in equivalent tons of carbon dioxide (CO2). For instance, when you drive a car, the engine burns fuel which creates a certain amount of CO2, depending on its fuel consumption and the driving distance.

Carbon dioxide contains harmful substance that affect the ozone layer, a protective shield that absorbs most of the ultra-violet rays from the sun before they reach the earth. The destruction of the ozone layer is partly responsible for global warming with all the negative attendant effects.