Few minutes into 7 am, there was no sign of voting.

Few minutes into 7 am, there was no sign of voting.

As early as 5:30am, voters at Paul Mukasa Senior Secondary School Kigunga polling station in Nyenje parish, Goma division in Mukono district, lined up in anticipation.

However, a few minutes into 7 am, there was no sign of voting. Peace Katushabe, the NRM chairperson in Kigunga said Bakaluba Mukasa, the owner of the school had refused to open the gates for the Electoral Commission officials to set up the area.

"It was earlier on agreed that this school would be the polling station for us but he had ordered his workers not to open the gates," Katushabe told New Vision. 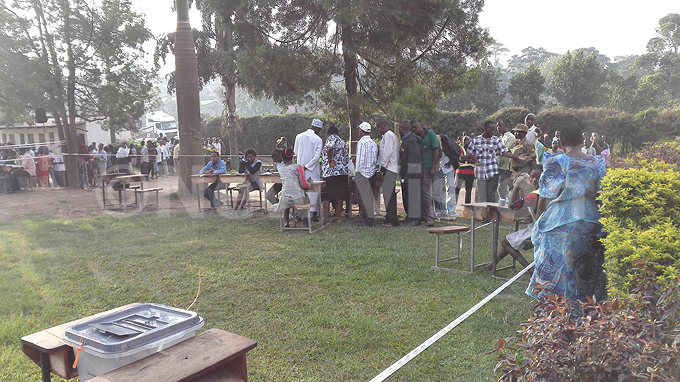 By press time, Mukasa was not yet at the school premises. However the EC officials eventually started work. The voting exercise started at 8am with a few hitches.

Leopoldo Orishaba, a 30 year old voting for the first time said he did not have time to vote in the previous elections adding that the work he does, required his full attention and physical presence.

18 year old Elijah Ssesanga, a senior five student at Namataba High School said he was excited to vote for the first time, saying his input in the electoral process will contribute to the nation's good governance.

Peter Senfuka who has been voting since 1996 said this time round, the use of the National Identity card as a requirement in the voting process, smoothened the exercise.