Borrowers to access loans through mobile h...
Next Story

Aloysius Kampuru, a game ranger in the Rwenzori national park remembers the large heads of duikers, forest elephants and leopards that traversed the park several years ago.

"Immediately you entered the park, you would encounter one of them, some would even come to the community," says Kampuru. Now, he says the animals are fewer and hide far deeper in the park because of poaching and human encroachment.

Instances of poaching and human activity still exist despite the demarcation and gazetting of the park by Uganda Wildlife Authority. But a new creative partnership between the community and World Wide Fund for nature (WWF) is helping to contain this.

With a modest grant of about sh24m from WWF since 2015 for buying seedlings, the group is already producing 60,000 seedlings and creating a new experience that tourists can take part in at a modest fee and purchase the final packed coffee.

Richard Mwesigwa, WWF project manager says the project situated on the boundary of Rwenzori National Park was started to sway the community away from poaching and encroaching into the park.

"Their mindset was lets grow coffee, lets sell coffee while some went to the park to poach, now they are tapping into the tourism experience using the same coffee," noted Mwesigwa

The farmers have also set up a demo plot where coffee, bananas and shed trees are inter-planted in a smart practice that conserves the soil.

"The target is that people should come here and learn it and go and do it in their garden," said Mwesigwa.

At a modest fee, a tourist gets physically involved in the process of picking fresh coffee cherries, pulping (removing the husks) and fermenting to remove juice. They also get involved in the local roasting which is done for 30 minutes and then the coffee is ground.

The finished coffee with a strong powerful aroma is then packed locally.

Some of the tourists set to climb mountain Rwenzori

The Arabica coffee takes three months to mature. The WWF partnership with Busongora Joint Framers Association (BJFA) is with 17 groups of 560 people.

Kasighahire Mathias from BJFA in Kasese district says these has helped because those who may want to go and cut trees or go for game meat would have an alternative source.

Sylvia Kibugwamu, a member of BJFA took a trip to the coffee growing area of Kapchorwa in early 2015 still with support from WWF where she learnt how to maximize output from one care of learnt.

At the foot of the mountain near Kilembe

She is getting close to 700kgs from 646 trees by timely weeding, pruning and creating drainages that help the garden not lose surface water.

Today she happily supports five family members, has built a house and now set up a food crop garden on the fringes of our coffee garden

Some of the visitors participate in preparation of coffee seedlings

Their dream is to export their coffee directly from Busongora to the international market "so that we can get good prices, good income and bonus from Fair Trade."

Coffee is Uganda's leading cash crop earning the country the largest share of foreign exchange outside tourism. The integration of coffee as a tourism product according to experts therefore creates a powerful economic combination is well exploited because currently, value addition remains fragmented. 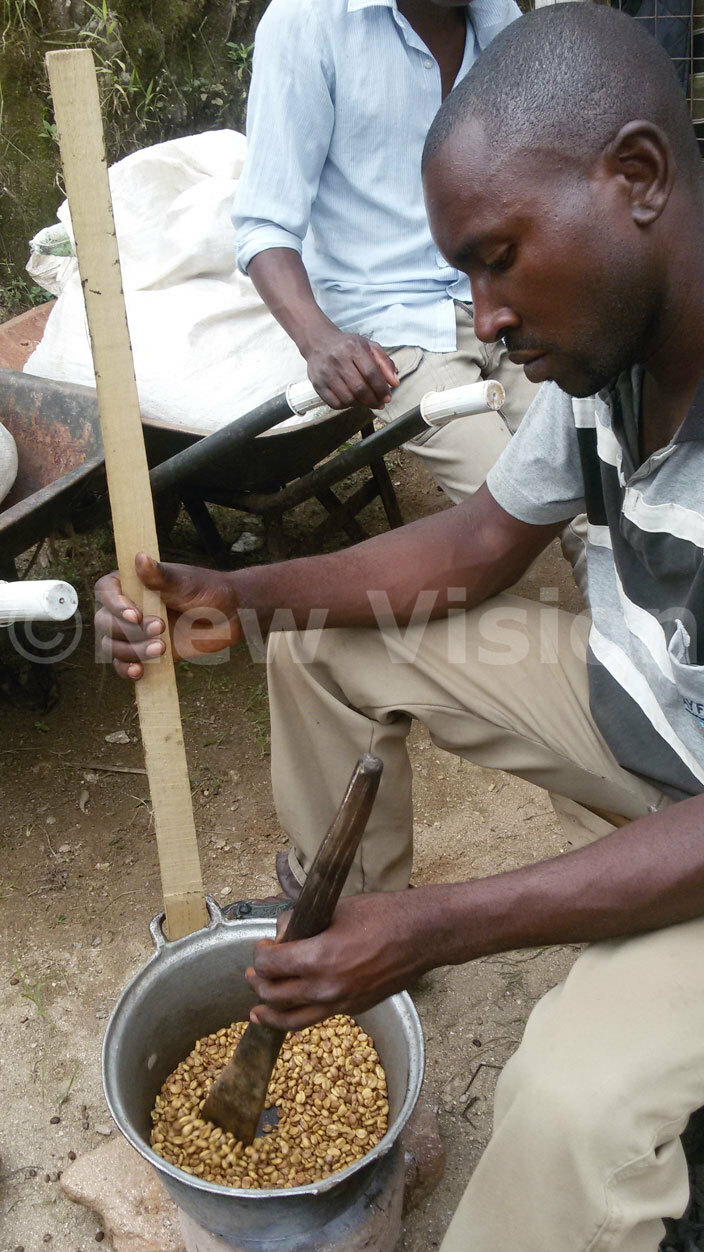 A man pounds roasted coffee on a traditional pestle

Chevron specialist to speak to oil and gas private sector

Chevron specialist to speak to oil and gas private sector...