We shall defend and limit movement - Guine...
Next Story

Geoffrey Kizito's potential move to Spanish side Malaga during the mid-season transfer window has fallen through, largely due to the visa restrictions he experienced at the French embassy.

Despite impressing during his trials stint at the high-profile club, the Ugandan midfielder did not have enough time to process his move from Vietnam club Than Quang Ninh before the transfer window closed on Tuesday.

"Kizito performed well and Malaga were interested in keeping him, but we couldn't do much because there wasn't enough time to process the paperwork," said Rayco Garcia, the player's representative at Malaga.

"The situation would have been better had Kizito secured his visa earlier as planned. He was bounced at the French Embassy, and when they finally granted him the visa, it was just for a few days. It's really unfortunate," said Garcia.

"He handed in his passport in December, but it was kept until January. This is not right," he stated. 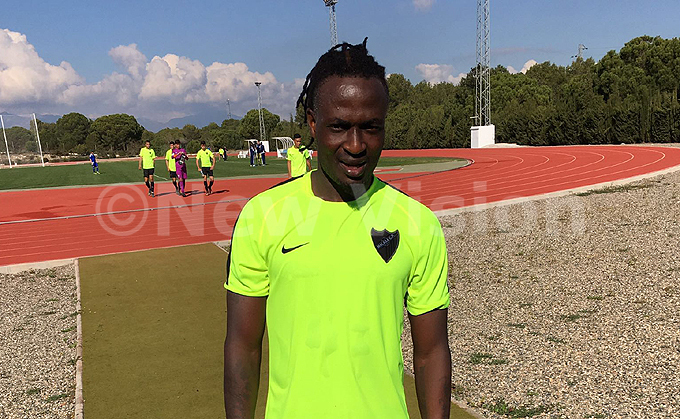 Then, the 22 year-old will probably have to undergo a medical if indeed Malaga were impressed, particularly with his display in the Spanish team's reserve friendly against Ukrainian side Dynamo Kiev last month.

"He performed well. He even hit the post. He will have more trial matches this week," Garcia said back then.

If Kizito succeeds, he will become the first Ugandan to play in the highly rated European league that boasts two of the best players in world football Lionel Messi and Cristiano Ronaldo.

"I find it strange that national team players are not given the respect they deserve. Why would a player like Kizito go through visa challenges like he did," Garcia wondered.

Kizito is a brilliant box-to-box midfielder. The Cranes star is a hardworking and a tenacious player, gifted with strength, and stamina.

In Vietnam, where he turns out for Quang Ninh, Kizito has been highly regarded for his tactical intelligence and ability to read the game from his deep-lying position.

"He is tactical and understands the game well," Garcia stated.

Garcia was the architect behind the historic Barcelona Legends match that was organized in the country last December.

The Spaniard will return to the country to lay the foundation for the Rayco Garcia Football Academy.