They insisted on meeting the president whom they said understands their issues.

DPC Aron Baguma talks to one of the disgrantled disabled persons, Aisha Amooti, sitting in the middle of the road along Saidi Bare Avenue during a protest over a land title. Photo by Agnes Nantambi

They insisted on meeting the president whom they said understands their issues.

Business on Thursday was paralysed after People with Disability (PWDs) stormed the Ministry of Lands blocking Said Bare Road up to Nile Avenue demanding a land title for land President Museveni gave them.

They claim that President Museveni gave them the land located opposite Makerere University main gate to use as a market.

The group headed by Danniel Kiza was holding placards with messages: "WE COME TO RESCUE OUR LAND", WE WANT JUSTICE. 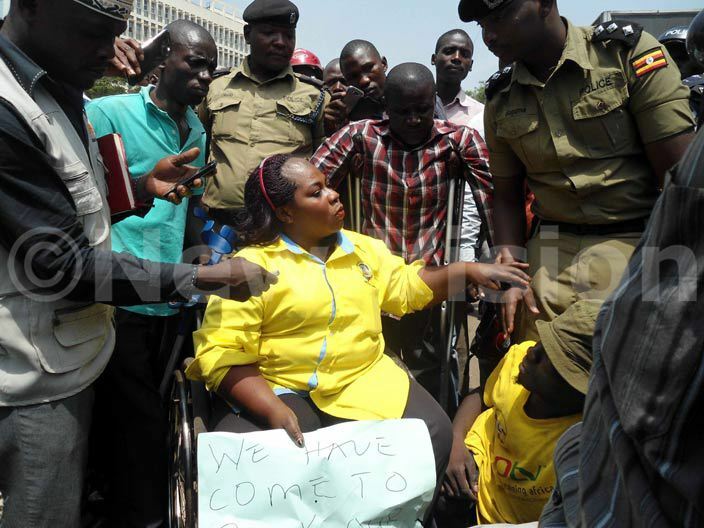 The group operates under the 'Abalema United efforts limited' and accused the Uganda Land Commission of what they called sabotage.

Business came was paralyzed as the police diverted traffic which had become uncontrollable.

It took police some time to convince the group to handle their matters in the boardroom at the ministry of lands but they insisted on meeting the president whom they said understands their issues.

One of the PWDs, Jackson Nadoha, said the land in question was given to them by President but its lease expired.

"When the lease expired, the president directed that we put in our request and first priority should be given to us. When that was not done, we went to court and we won the case and we were promised a land title within a short time  which up to now we have not received, "he  narrated. 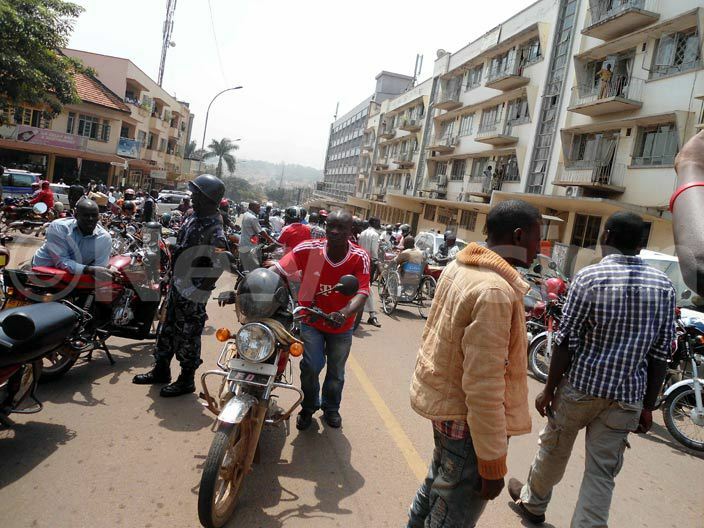 Boda boda cylists manouver through the chaos after PWDs operating at Wandegeya blocked the road. Photo by Agnes Nantambi

Nadoha said that despite several reminders they have not been attended to.

Kiiza said they are not ready to listen to anybody other than President Museveni.

Aron Baguma, the Kampala Metropolitan DPC advised them to reconsider reconciling with the second party in order to address their matters amicably.

"My fellow Ugandans I beg you, I don't want to apply tear gas on you but please allow me to let you leave this road so that traffic can be stabilized," he pleaded.