Distribution of the poor and the rich in Uganda

A problem poorly diagnosed becomes difficult to solve. So the question for policy, is to investigate where the missing link is, which if identified would help bridge the gap between poverty and prosperity

A problem poorly diagnosed becomes difficult to solve. So the question for policy, is to investigate where the missing link is, which if identified would help bridge the gap between poverty and prosperity

In the modern state, the phenomenon of poverty has intrigued scholars, politicians and policy makers as it has puzzled its victims -the poor.

That observed, no place has received more bashing for its poverty than the sub region of Busoga. Some have dubbed it the capital of poverty, an assessment that has largely been based on anecdotal evidence. However, though the poverty situation in Busoga is not good, this is not an accurate and balanced representation of the facts in comparative terms.

Perhaps a fairer assessment would be that given its potential, Busoga should have fared better. The area is fairly well endowed with resources and numerous advantages. It did not suffer from war, it has quick and easy accessibility to Kampala, good soils, favorable climate, and high production capacity. For instance, aggregate data from statistical abstracts, indicates that the sub regions produces more maize, rice, sweet potatoes and sugarcane.

It also has abundant fisheries resources. But all these have not been translated into prosperity. Economists refer to this as a paradox, where the variables fail to follow the generally laid down principles and assumptions and instead behave in the opposite fashion.

Empirical evidence of sub regional poverty in Uganda
That as it may, to get a clearer picture of the problem, one needs to look at the empirical evidence available. This is ably evinced by the Poverty Status Report 2014- Structural Changes and Poverty Reduction in Uganda, produced by the Economic Development Policy and Research Department of the Ministry of Finance, Planning and Economic Development.

The report, among others things, makes a sub-regional poverty assessment using UBOS data, which results are presented in the graph below: 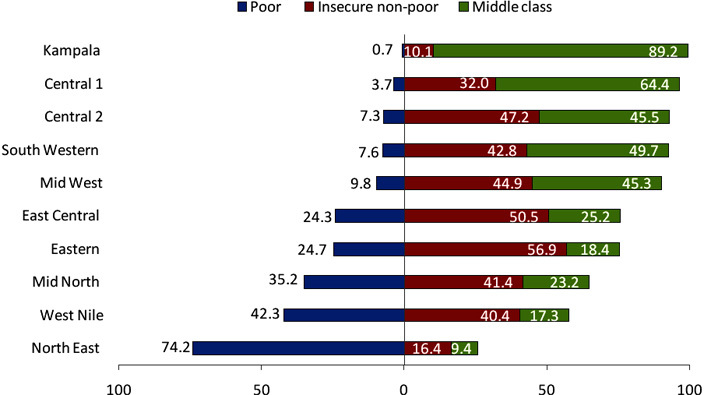 In this graph Buganda region is presents as Kampala, Central One, and Central Two; Ankole and Kigezi are presented as South Western; Bunyoro, Tooro and Rwenzori as Mid West; Busoga as East Central; Teso, Bukedi, Bugisu, and Sebei as Eastern; Lango and Acholi as Mid North; West Nile as West Nile and Karamoja  as North East.

Distribution of Uganda's Poor.
When it comes to were the poor are most found, Karamoja has the highest percentage of poor people at 74%. This is followed by West Nile at 42%, then Lango and Acholi at 35%, Eastern with 24.7%, Busoga with 24.3%, Bunyoro, Tooro and Rwenzori with 9.8%,; Ankole and Kigezi with 7.6%. Buganda region has the least percentage of poor people; Central two 7.3%, Central one 3.7% and Kampala 0.7%.

A problem poorly diagnosed becomes difficult to solve. So the question for policy, is to investigate where the missing link is, which if identified would help bridge the gap between poverty and prosperity.

The writer is a development evaluation consultant (Evaluator)

Germany says Erdogan has 'gone too far' with Nazi jibe