Man killed trying to split his fighting pa...
Next Story

“The late Professor Obonyo is most remembered for his invaluable services in the medical field in which he served for many years."

It was a sombre mood at the burial of the four family members: Dr. Obonyo, his wife and two daughters. (Credit: Wokorach-Oboi)

“The late Professor Obonyo is most remembered for his invaluable services in the medical field in which he served for many years."

LAMWO - President Yoweri Museveni has paid tribute to the late Dr. Henry Benjamin Obonyo, saying he was "an unsung hero" of the struggle to topple Idi Amin Dada's tyrannical regime of the 1970s.

This was in a condolence message to the bereaved family and mourners during the burial.

Museveni's message was delivered on his behalf by the state minister for northern Uganda, Rebecca Amuge Otengo. 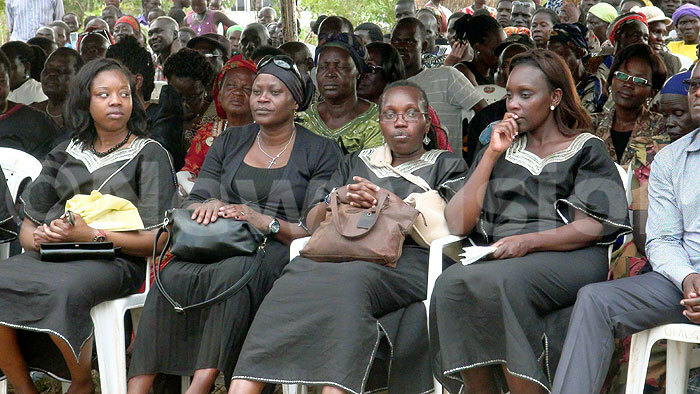 Some of the surviving family of the late Dr Obonyo at the burial at Madi Opei sub-county. (Credit: Wokorach-Oboi)

In the missive, the president said he was saddened by the news of Obonyo's death in an accident, together with his wife and two daughters.

"On behalf of the National Resistance Movement, the entire nation and my own, I wish to convey my most sincere and heartfelt condolences to this family and the people of Lamwo upon this great loss. May God comfort you at this most difficult time of grief," he said.

"The late Professor Obonyo is most remembered for his invaluable services in the medical field in which he served for many years and did it very well. He has however been one of the few unsung heroes of the liberation struggle against Idi Amin."

Museveni revealed that while Obonyo was exiled in the Kenyan capital Nairobi and working at Williamson Diamond Hospital, he advised Dr. Anthony J. Okullu to "join hands and treat exiled refugees from Uganda who were stationed at Kibwa Camp in Tabora". 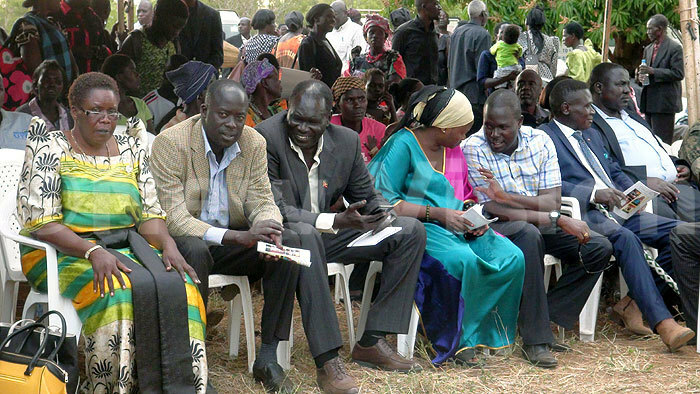 Earlier, Lyandro Komakech, a close friend to the Obonyo, told mourners that he together with the late used to contribute their salaries - while in exile - to the Ugandan forces there to help the cause to depose Amin's regime.

In his tribute, Museveni said that he found Obonyo as a "very patriotic and peace-loving person who used his medical profession to bring hope to many, and rescued them from danger".

The president elaborated that the late Obonyo served humanity in many fields including as a medical doctor and consultant at Mulago Hospital and the Medical School, a lecturer in Uganda and foreign countries like the UK.

He was also a former parliamentary legislator for Kitgum North under the Democratic Party and a minister of health in 1986 during the brief regime of Gen. Tito Okello Lutwa.

"We remain indebted to his humane services not only in Uganda but elsewhere in the world where he represented us as a medical intellectual," said Museveni. 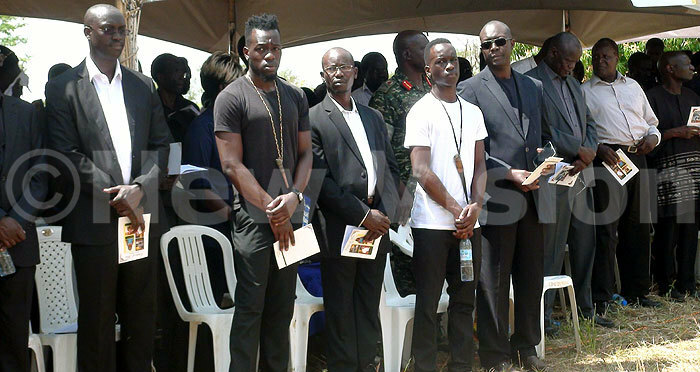 Part of the Obonyo family members at the burial of their father, mother and sisters. (Credit: Wokorach-Oboi)

The remains of Dr. Obonyo together with that of his wife Kevin Asio Obonyo and daughters Elizabeth and Marjorie Obonyo, were laid to rest alongside the graves of his father and mother at Melec-Poyamo village, Madi Opei sub-county in Lamwo district on Saturday.

The four were killed in a car crash at Bobi, along Kampala-Gulu Highway earlier this year, after the tyre of their vehicle burst, causing the vehicle to overturn several times.

Four other family members including his daughter Carol Obonyo and grandchildren suffered serious injuries and were rushed to Lacor Hospital in Gulu before being flown to International Hospital Kampala (IHK).

President Museveni warned motorists against reckless road use. "I condemn the reckless driving on the roads to avoid losses of our very useful citizens," he said, before giving sh10m as his condolence, on top of sh30m that was given earlier to cover the burial costs. 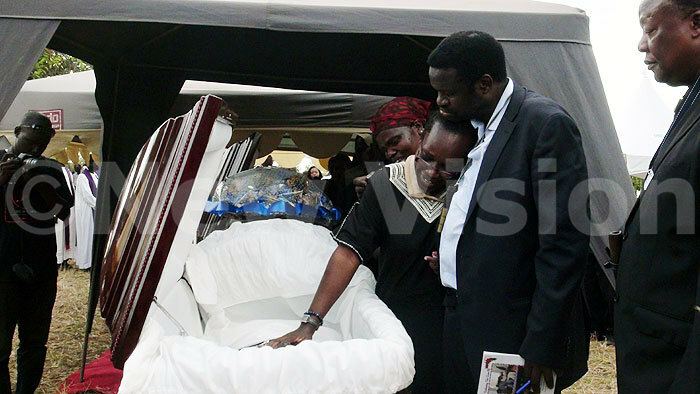 Carol Obonyo breaks down as she bids farewell to her father as Samuel Olara (son to the late Bazilio Okello Olara) comforts her. (Credit: Wokorach-Oboi)

Carol Obonyo, still with a support to her shoulders and arms, was airlifted with another unidentified woman to attend the burial of her father, mother and two sisters.

She thanked people from all over the world that prayed and supported her and the family during the trying time.

The main celebrant, Monsignor Vincent Ojok called on especially leaders to emulate the exemplary life of the late Dr. Obonyo by using their God-given talents and the skills and knowledge He gave them to selflessly serve humanity and not themselves.

"When you are serving in a particular role, please use your office to serve the entire humanity with diligence, honesty and transparency without thinking about yourselves only." 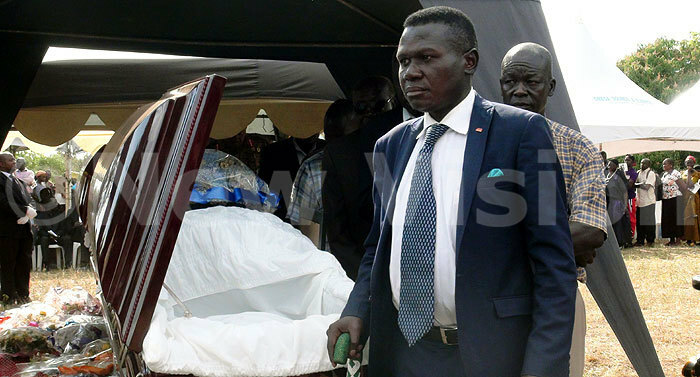 DP President General, Norbert Mao, who lost his father Dusman Okee around the same time as the Obonyo family deaths, walks past the coffins. (Credit: Wokorach-Oboi)

He also cautioned political candidates at various levels that this time voters are ready to vote only those with required leadership qualities.

"We will vote only for those with district leadership qualities, we will not vote for the colour of your clothes but will vote the one with the qualities of Dr. Obonyo - the ones who care about people and not only for their stomachs,"said Msgr Ojok, drawing a huge applause.

He commended UPDF officers from Acholi-land, like Charles Otema Awany and Gen Oketta for their contribution to the various problems across the sub-region.

"But there are others here whose names are not heard. You only read their names on buildings scattered all over the place but they don't want to share. How shall we then vote for you? We won't elect you."