Ebola is due to be declared over as Liberia gets the all-clear, thanks to a brave army of doctors, nurses, grave diggers, contact tracers and others.

From left orphan children Leno Emmanuel, Leno Ousmane Tamba, Leno Hawa and Leno Mathias at home in Conakry, Guines. According to the UN, more than 22,000 children lost at least one parent to the deadliest Ebola outbreak in history

Ebola is due to be declared over as Liberia gets the all-clear, thanks to a brave army of doctors, nurses, grave diggers, contact tracers and others.

They may have conquered Ebola but survivors of the fever and the heroic workers who saved them face a new struggle: acceptance by communities after the end of the deadly epidemic.

The worst outbreak of the tropical fever in history ravaged west Africa over two years, infecting -- by the most conservative estimates -- almost 29,000 people and killing more than a third.

It is due to be declared over as Liberia gets the all-clear Thursday, thanks to a brave army of doctors, nurses, grave diggers, contact tracers and others there and in neighbouring Sierra Leone and Guinea.

They are celebrated as heroes by their government and the international community, yet many face the harsh reality of stigmatisation rather than gratitude once back in their communities.

Helen Matturi signed up for the Red Cross disposal teams responsible for safely burying highly infectious victims as the outbreak began to tighten its grip on Sierra Leone's capital Freetown in 2014.

"At the onset of the Ebola outbreak, it was men that were handling the corpses of women, sometimes in an exposed fashion. I wanted to keep the dignity of women if they were dead," she said.

Soon after joining up, her fiance left for work one morning and never returned.

"When some friends tracked him down and asked the reason for abandoning the house where we were living together, his answer was: 'I don't want an Ebola family'."

The tropical pathogen, one of the deadliest known to humankind, is spread through contact with the bodily fluids of an infected person showing symptoms such as fever or vomiting, or the recently dead. 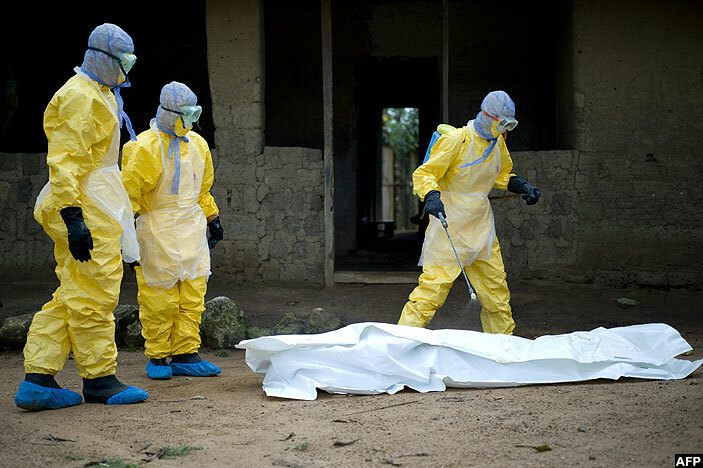 November 19, 2014: Health workers from Guinea's Red Cross preparing to carry the body of a victim of the Ebola virus in Momo Kanedou in Guinea

The fever, which can cause fatal haemorrhaging, organ failure and severe diarrhoea, spread to 881 health workers, killing more than 500.

As well as shattering health services, economic growth and family life, it has also sewn deep fissures in communities hit hardest by the contagion.

Ebola bred fear and suspicion, particularly in rural areas where many believe that foreigners are responsible for spreading the disease, including the very humanitarian groups who helped overcome it.

Victor Koroma, another member of a Freetown burial team, told AFP he was forced to move home six times as landlords or neighbours found out how he was earning a living.

"In some instances, I was openly called the Ebola Corpse Man and, since the nickname was persistent, I had to move," he said.

The hostility encountered by both west African and western aid workers and medical staff has manifested itself not just in low-level disapproval but in sporadic bloodshed.

Guinea and Sierra Leone saw numerous episodes of mobs attacking ambulances and burial teams as they imposed a state of emergency and began restricting movement of their populations.

The violence reached a grim nadir in 2014 when eight members of an outreach team in southern Guinea were slaughtered by protesters who denied the existence of Ebola and denounced a "white conspiracy".

The hostility has hit not just health workers but also survivors, made pariahs by the fear of contagion and because their very existence is a painful reminder for families who lost loved-ones.

A UNICEF survey of 1,400 households across Sierra Leone in 2014 found that Ebola survivors suffered high levels of stigma, shame and discrimination. 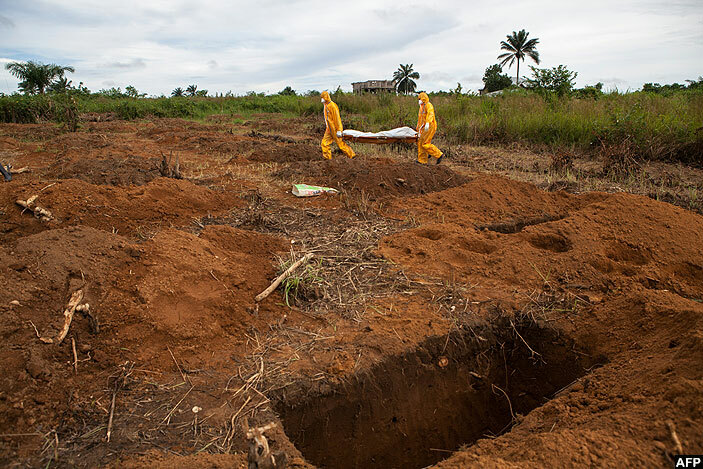 October 07, 2014: Volunteers in protective suits carrying for burial the body of a person who died from Ebola in Waterloo, some 30 kilometers southeast of Freetown

In another survey by Sierra Leone's health ministry and the United States' Centers for Disease Control and Prevention, 96 percent of respondents reported discrimination toward people who had beaten Ebola.

An exacerbating factor has been the discovery that the virus can stay in semen for at least nine months after a patient has recovered, six months longer than previously thought.

Scientists are working to establish how long it can persist in other bodily fluids and tissues such as they spinal column and the eye, and for how long it could remain infectious.

Ebola passed on from survivors whose blood had been given the all-clear is thought to have been behind two small outbreaks in Liberia after it was initially declared Ebola-free.

Medical charity Doctors without Borders estimates around three-quarters of survivors are dealing with a variety of post-Ebola complications including headaches, fatigue and eye problems.

Momoh Sesay, a middle-aged farmer in Kambia, a major trading post in northwestern Sierra Leone, was already struggling with grief after losing his two wives and four children to the epidemic.

He survived his own infection, but encountered hostility rather than sympathy when he returned home.

"Everything was went well at first when I was discharged," he told AFP.

"But as soon as word went round that some male survivors sometimes have the virus in their semen, many of my best friends would wave to me from afar and then hurry on."