Obama tells US to embrace time of 'extraor...
Next Story

South Korean President Park Geun-Hye on Wednesday urged the international community, and in particular China, to ensure that North Korea receives the strongest possible punishment for its latest nuclear test.

Her comments came as North Korean leader Kim Jong-Un defiantly told his scientists to swell the size of the country's nuclear arsenal with more powerful bombs capable of striking the United States.

Describing last week's test as a gross provocation and an "unacceptable challenge" to global peace and security, Park said it was time to adopt a harsher line with the recalcitrant regime in Pyongyang.

"The international community's countermeasures against North Korea's last nuclear test must differ from the past," Park told an annual press conference.

As well as working with the United Nations to adopt the "strongest" resolution to penalise North Korea, Seoul would also discuss additional "punitive sanctions" with the United States and its allies, Park said.

The president stressed that China, North Korea's main ally and economic benefactor, would be critical in securing an effective Security Council resolution.

Noting Beijing's public admonishments of Kim's regime over its nuclear programme, Park said it was time for China to move beyond rhetoric.

"I believe China is aware that if its strong determination is not put into actual, necessary actions, we will not be able to prevent a fifth or sixth nuclear test," she said.

Her comments echoed those last week of US Secretary of State John Kerry, who had urged China to take a tougher line with North Korea, warning in a call to his Beijing counterpart that it cannot be "business as usual". 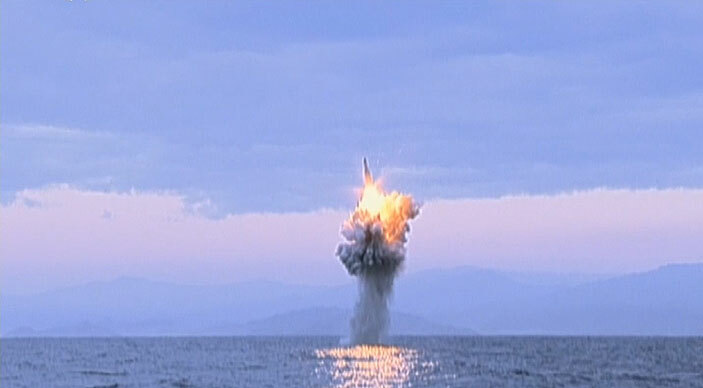 A missile being launched vertically from underwater and igniting in mid air, from off the coast of North Korea, purportedly on December 21, 2015. (AFP/KCTV)

North Korea says last week's test was of a miniaturised hydrogen bomb -- a claim largely dismissed by experts who argue the yield was far too low for a full-fledged thermonuclear device.

But whatever the nature of the device, it was North Korea's fourth nuclear test since 2006, and further evidence of Pyongyang's intention to continue developing its nuclear weapons capability in the face of international censure.

"Considering the North Korean government's deceptive and reckless ways that were reaffirmed by its latest nuclear test, an additional North Korean provocation can take place any time," Park said, adding that Seoul and Washington were discussing the transfer of further US "strategic assets" to the peninsula.

In a show of strength on Sunday, a nuclear-capable US B-52 bomber -- flanked by South Korean F-15 fighter jets and US F-16 planes -- flew over Osan Air Base, some 70 kilometres (45 miles) south of the inter-Korean border.

The nuclear-powered aircraft carrier USS Ronald Reagan -- currently based in Japan -- as well as B-2 stealth bombers and F-22 stealth fighter jets are understood to be among the additional deployments being considered.

In a meeting with his nuclear scientists in Pyongyang on Tuesday, Kim said the talk of sanctions and movement of strategic weapons was "bringing dark clouds of a nuclear war" to the peninsula.

As a result, he urged them to build up a nuclear force "capable of making nuclear strikes at the US-led imperialists anytime," the official KCNA news agency reported.

The broadcasts -- a high-decibel mix of K-pop and anti-North messages -- are a red rag to Pyongyang, which had threatened artillery strikes on the loudspeaker units when they were used during a cross-border crisis last year.

Park defended the broadcasts as an "effective psychological measure" and said her government would push ahead with all efforts to inform North Koreans about "the truth" of their regime.

Companies advised to tighten IT controls against fraudsters

Why Ugandans should worry about cyber threat in 2016

What are Sudanese protesters demanding?

What are Sudanese protesters demanding?