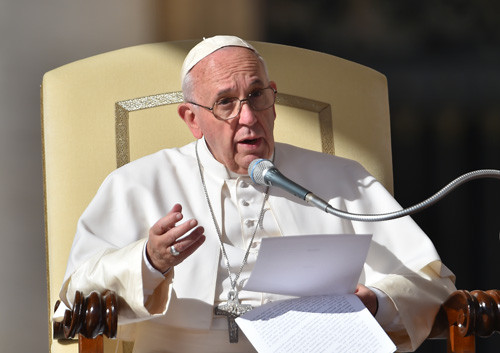 Kenya said on Sunday it may deploy as many as 10,000 police officers to boost security during a visit by Pope Francis later this month, as the country readies for crowds of one million people.

Islamist rebels have staged a string of attacks in Kenya, including an April massacre at Garissa university in which 148 people were killed, and a 2013 assault on Nairobi's Westgate shopping mall that killed 67.

"Security agencies continue to fine-tune plans to secure the city during a particularly busy period, and when we expect Nairobi’s population to swell by an additional one million people," State House spokesman Manoah Esipisu said in a statement.

"Tentatively, some 10,000 police officers will be deployed," Esipisu said, adding that another 10,000 members of the government's youth service would help in crowd control.

The pontiff will be in Kenya from November 25 to 27, before spending two days in Uganda and travelling to the Central African Republic (CAR), where his trip will end on November 30, according to a Vatican itinerary.

The three countries -- which have significant Catholic communities -- have been troubled by civil conflicts and violence, leading to increased security concerns surrounding the pope's visit.

In Nairobi, Francis will tour the Kangemi district, home to some 100,000 people who live in shacks without proper sewage systems and where some 20,000 residents belong to the local Catholic parish.

In July, Kenya hosted US President Barack Obama, a visit that effectively shut down the capital of Nairobi, with hundreds of American security personnel and military helicopters deployed.

Kenyans were urged to stay at home during the visit, with Nairobi's normally traffic-clogged roads closed off during the massive security operation.

But Kenyan organisers for the papal visit said this trip would be different.

"Unlike the visit by President Barack Obama when the government encouraged Kenyans to stay home, we are encouraging Kenyans to flock into the city in their numbers to cheer the pope and celebrate mass with him," Esipisu said.

Bishop Alfred Rotich, who is heading the church's preparations in Kenya, said they were planning for a tenth of all Kenyan catholics to see the pope.

The church says almost a third of Kenyans are Catholic -- some 14 million of 44 million people -- although other estimates put the numbers of believers at around a fifth.

"We expect 10 percent of them, or 1.4 million from all over the country, to attend the papal high mass here in Nairobi," Rotich said, adding that the church was also expecting up to 60 cardinals, archbishops and bishops from across East Africa, with 9,000 extra priests drafted in to help.

As a boy, pope wanted to be a butcher