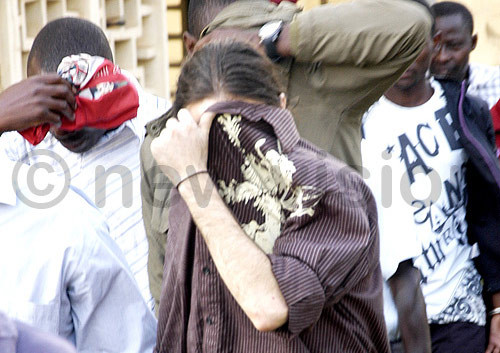 A Police officer on Wednesday told Buganda Road Chief Magistrate's court that an American national, Ryan Andrew Gustafson had in possession of fake dollars of different denominations in his bedroom.

Testifying as the seventh witness, the detective inspector of Police Denis Owoa, told court presided over by Chief Magistrate Flavia Nabakooza that he was instructed by the former SIU commander Charles Kataratambi to join a team of officers investigating a case of fraud at Stanbic bank, Kakira branch where an unidentified person exchanged fake dollars with genuine currency.

Owoa, a police officer attached to Uganda National Bureau of Standard (UNBS) also told court that they used an informer (name withheld) who bought fake denominations of US$10, 000 at sh50m from his co-accused Christopher Kojo.

"In order to find out whether the accused deals in fake currencies, I was facilitated with sh550m. I later on hired an informer whom I met at the petrol station opposite the US embassy in Nsambya on December 11, 2014 to do the job for me." Owoa narrated.

The transaction was made at Speke hotel in Kampala.

He said after the exchanges, both the informer and the Stanbic bank employee, a one Omona, followed him on a motorbike up to Mbalwa village in Namugongo.

"They were directing me and other officers where they had reached." Owoa said

Fortunately Kojo entered a supermarket which gave them a chance to join the informer until he entered a certain gate.

He noted that they called the area DPC and the village LCI chairman John Katogo because they could not make the search without their permission.

"We entered the gate and we found Gustafson, Kojo and a white lady in the compound," Owoa narrated to court.

He further told court that they informed Kojo that the money he had given to them in exchange for Uganda currency was counterfeit.

"From there, Gustafson entered the house and locked himself inside and we ordered him to open albeit in vain until we threatened him with shooting the door in order to enter. He then opened the door," Owoa said.

They recovered a black bag under the bed containing a US army uniform bearing name of Gustafson and other army facilities.

He said that they also recovered a police case file where Gustafson was purportedly charged in Kenya for being in illegal possession of ammunitions, nine knives and photocopies of his passports.

Owoa further said that they recovered different currencies of United State of America, Kenya, Uganda, Nigeria and India from the accused bedroom.

All the exhibits were tendered in court for identification purpose.

Owoa said that after the search, they made the search certificate where Gustafson apprehended his signature in the names of Jack Ferry and other people who were in their company.

"We then arrested him and Kojo who he said was his shamba boy who was innocent," Owoa said.

However, before cross examination, Gustafson asked court for an adjournment because he was not feeling well.

This prompted the trial chief magistrate to adjourn the matter to November 23 for further hearing.

Prosecution alleges that on December 11, Gustafson and Kojo, while in Mbalwa Village, Namugongo in Wakiso district without lawful excuse, had in possession of over US$10,000 counterfeit money in different denominations.

It is further alleged that the duo in December last year at Mbalwa village in Wakiso District was found selling the counterfeits. They were also unlawfully found in possession of ammunitions.

Meanwhile, the trial chief magistrate also dismissed Gustafson's application seeking the prosecution to amend the charge sheet, purporting that he had two files with similar offences.

However, Nabakooza ruled that the charges in the two files opened against him are different and all the case should go on.

"You can apply for bail for both cases," Nabakooza said.