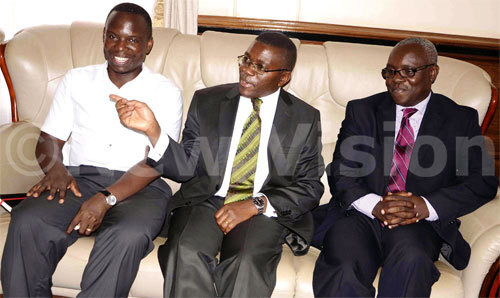 The Katikkiro (prime minister) of Buganda, Charles Peter Mayiga, has accepted to be the Chief Walker of the day at the Pope’s Walk event.

During a visit paid to him by Vision Group chief executive officer Robert Kabushenga at his office in Mengo, Kampala, yesterday morning, the visibly enchanted Katikkiro granted Kabushenga’s request and promised to lead the rest of the Christians in the historical walk.

Mayiga commended Vision Group for championing the cause to give the historical sites a facelift.

He noted that the refurbishments will paint a brighter image of the history of Christianity in Uganda.

The walk, which is geared towards raising funds for the refurbishment of both the Namugongo and Munyonyo shrines, in preparation for Pope Francis’ visit next month, has already got numerous individuals and business establishments coming out to contribute towards the cause.

While handing over a sh3m cash contribution to Kabushenga, the Kolping Holdings executive director, Aloysius Mugasa, said the project of refurbishing the martyrs shrines was worth the support from all Ugandans.

“As the Kolping society, we look at the project as one which all Ugandans must come out and support because it is a good cause,” he said.

In a related development, the students of Vienna College, Namugongo also contributed sh2.1m.

Kabushenga encouraged them to keep up the spirit, even in their future engagements.

The Pope’s Walk will see numerous Christians gather at Kololo Airstrip on October 31, from where they will be led by the Katikkiro to  Namugongo.

All those who will take part in the walk will have the opportunity to tour the site, to view the magnificent changes that have so far been made.

true
The Shrine Rector of Munyonyo, Fr. Dr. Marion Golob Kajubi, listens to the executive director of Kampala Capital City Authority, Jenifer Musisi. On Wednesday, Musisi visited the Munyonyo martyr’s shrine that is under construction in preparation for the Pope’s visit next month. Photo by Ronnie Kijjambu

true
Kabushenga receiving sh3m from the CEO of Uganda Kolping Society, Aloysius Mugasa (centre) as their contribution towards the Pope’s walk. Left is General manager Of Kampala Kloping Hotel