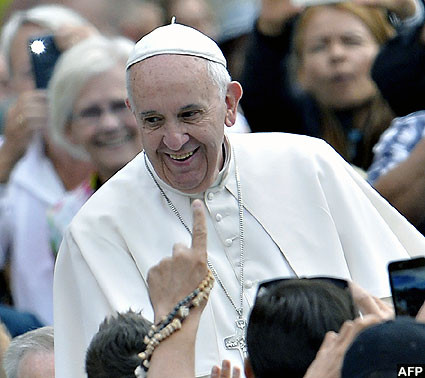 Divorce will not be on the agenda at an upcoming synod on the family, Pope Francis said Monday three weeks after he streamlined the process for Catholic couples to obtain annulments.

"With the reform of the process of annulment I have closed the door on the  administrative path through which divorce could enter," the pontiff told reporters as he flew home from his tour of Cuba and the United States.

The reform announced on September 8 makes it easier, quicker and free for Catholics to have their marriages annulled.

"But this is not a divorce," the pope said, "because marriage is indissoluble when it is a sacrament -- and the Church cannot change that: this is doctrine."

Annulment was designed for cases in which a marriage was forced, or the bride and/or groom was immature or mentally ill, he noted.

The Ordinary Synod on the Family, to be held at the Vatican from October 4 to 25, will mull changes in the Roman Catholic Church’s approach towards Catholics who divorce and then remarry in a civil ceremony.

The synod comes two months after the pope said divorced people who have remarried "are still part of the Church" and should not be treated as if they have been excommunicated or cast out.

In Pope Francis there is a message for everyone