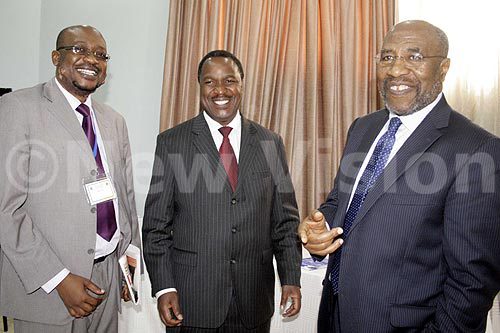 This was at a symposium advocating for Universal Health Coverage (UHC) interventions in Uganda. The symposium took place in Kampala.

State minister for health and general duties Dr. Elioda Tumwesigye, said that UHC is a dynamic process and it is not about a fixed minimum package, it is about making progress on several fronts.

Dr. Elioda Tumwesigye, appreciated the contribution of ECSA –HC to Uganda’s health sector and noted that efforts to promote the social health insurance began in 2001 and in 2006 Cabinet passed principles for the Bill of 2001.

He added that on 29th January 2001, while at Pece stadium, President Yoweri Museveni abolished the medical user fees and there was an  improvement in health service delivery.

Tumwesigye said only six percent of Ugandans have Health Insurance and the government is spending about $13 every year on every Ugandan.

“For the minimum health coverage, we need about $30-40 dollars per capita,” he added.

The Director General of ESCA Mr. Edward Kataika, said that all people should have access to health services.

“People should access services of sufficiently good quality and without financial hardship,” he added.

He also noted that ECSA’s principles call upon member states to implement their resolutions at health forums.

“Our member states are at different stages and Uganda is the first country to receive this support,” he added

Communication and Advocacy manager of ECSA, Arthur Rutaroh said that health is generally recognized as a priority sector in national development within ESCA Health Community member states. However, the healthcare services needed to produce healthy population.