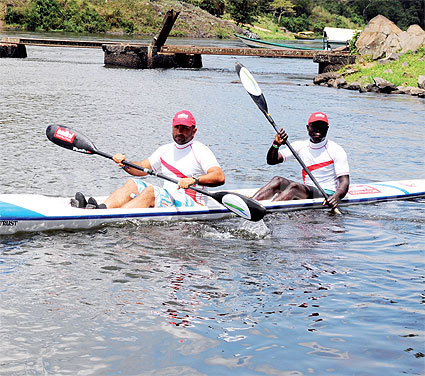 The second year of Vision Group’s campaign to save Lake Victoria comes to an end on June 5. Today GERALD TENYWA looks at how the lake can be used for activities that could bring in more tourists.

The tiny rocky island lies leisurely on Lake Victoria near Kigungu landing site in Entebbe. This could be the only island crossed by the Equator in Africa’s largest freshwater lake.

However, unlike the other Equator points such as Kayabwe on Kampala- Masaka Road where tourists make stopovers, the Equator Island has remained in obscurity. Just some few shillings and a little more thought and effort would turn this island into a popular destination, giving tourists a memorable experience.

Lying astride the Equator and being fed by numerous rivers including Kagera, Lake Victoria is but a jewel in the hands of a sleepy woman.

Also, Henry Morton Stanley who toured Lake Victoria in 1875. It also nurtured the early civilizations including Buganda, which had a strong navy on the lake.

But the beauty and the wealth of the lake, in form of tourism, remain untapped, leaving fishermen to scramble for a small fraction of the immense wealth the lake provides and thus leading to over fishing.

“The lake is an immense tourist attraction potential that remains untapped,” says Herbert Byaruhanga, the president of the Tourism Association of Uganda.

He adds that Lake Victoria has some of the richest grounds for treasure hunters that would bring in billions of money.

“Policy makers need to understand water tourism; Ugandans are sleeping on a goldmine,” he explains.

Boniface Byamukama, a tour operator says the lake is one of the eye-catching beauties that would attract an unlimited number of tourists.

About 6,125km away from Kampala, at River Siene in Paris, France, dinners are held on boats in the evening with each patron paying not less than $100.

They also offer romantic cruises at night. This offers a lot of business to the boat operators, the caterers, entertainers, and people engaged in ticketing and booking. On a good day, River Siene, which flows around Paris, is as busy as the old taxi park in Kampala, with boats picking and dropping patrons.

In Durban, the sand beaches are buzzing with activity. They open their gates at 5:00am and close at mid night. It is a booming industry with customised luxury coaches and vans that bring revelers from places outside Durban.

Police for beach tourism is always up watching over as local and foreign tourists get out to sand bathe, walk and swim.

At Rio de Janeiro’s beaches, Ipanema and Copa Cabana, the atmosphere warm with tourists going out for beach soccer bicycle riding, swimming and boat-racing, among other activities. Others go for expeditions on yachts.

Urban planners in modern cities where water tourism is booming have also done their ground work.

The environment is natural. In Uganda, experts like Dr. Arthur Mugisha, a representative of Flora and Fauna International, say policy strategies are needed to pave way for private sector investments.

“The lake is rich but the tourism products have to be developed and sold to intending tourists,” he says.

Lake Victoria is laid back with most fishermen hanging on dugout canoes to earn a living. In urban areas like Kampala, which is only 10km away from Lake Victoria, the population is wallowing in poverty.

Others drive to Entebbe where they patronize outlets of roasted pork, fried fish leaving their playful children to run along the sand beaches. Investment at the lake’s landing sites and in access roads is minimal.

true
Algae growing on Lake Victoria as a result of pollution. The waste and effluent from Kampala are feeding the algae.

On a rainy day, cars get stuck on the muddy roads and the dry season people plying the landing sites have to endure thick clouds of dust. The makeshift slums mushrooming at the landing sites are a clear manifestation of lack of planning and a wasted resource.

But residents have settled for what they think is the best out of their means. The sight of bare chested men carrying passengers onto and out of the canoes on the landing sites sums it up: the need for properly constructed marinas or platforms for boarding boats.

As Edwin Muzahura, the Uganda Tourism Board marketing manager, Lake Victoria offers a huge potential that is yet to be harnessed.

By virtue of its position as the second largest fresh water lake, Victoria offers immense opportunities for marine tourism, sport fishing and rafting. Apart from leisure, Muzahura says, the lake offers opportunities for transport within Uganda and the other East African countries sharing the waters.

But currently, Uganda, which is a land-locked country, has more traffic on the roads yet water transport is cheaper.

“To be able to market Lake Victoria, there should be clear and safe routes,” Muzahura explains.

He adds that the Ministry of Works needs to put a map showing the safe routes on the lake that are free of rocks and other hazards.

“We need agencies of Government to work together to promote Lake Victoria as a tourism destination.”

Muzahura points out that though it might be expensive to map out the safe routes, which could cost as much as $500,000 for a route connecting Port Bell to Tanzania, the benefits are immense.

Dr. Tom Okurut, the executive director of the National Environment Management Authority says the route between Entebbe and Ngamba Island was declared a navigable route with funding from the Lake Victoria Basin Commission.

Though it is commonly believed that sport fishing was the reason the colonial administrators introduced the Nile Perch in Lake Victoria, the activity is not as vibrant on the lake as it is in Murchison Falls National Park.

Instead of travelling the long distance to the Murchison Falls National Park, the colonial administrators wanted to spend their leisure time engaging in sport fishing in a place not far from Entebbe, according to John Balirwa, a senior researcher at the Fisheries Resources Research Institute.

The Nile Perch was first introduced in Lake Kyoga. This, according to Balirwa, was supposed to be a holding ground for experiments before introduction into Lake Victoria, which is a shared ecological system.

But before studies were concluded, researchers at that time discovered that the Nile Perch had already made its way into Lake Victoria, according to Balirwa.

With Kampala, Entebbe and Jinja, sport fishing would be one of the popular leisure activities on the lake.

The tourism investment is being made by private sector but Government and its partners will have to come and remove the barriers for the lake to bring in big money.