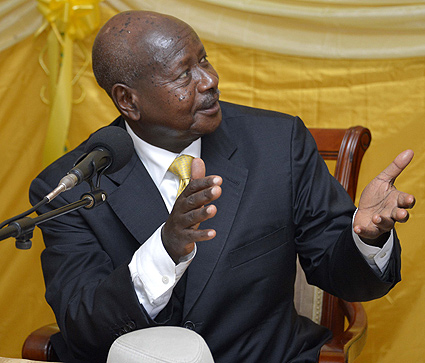 President Yoweri Museveni has said he will pronounce himself on the Kyankwanzi resolution at an appropriate time saying the issue is not to want to be President but what the country and Africa needs.

"If am wanted, we shall have an answer to that at the right time, because there is the question of being offside. I welcomed the Kyankwanzi resolution in the context of party cohesion because there were rumours that there were `wanters'..and wanters in a bad way. If you want in a bad way, you are forced to tell lies," he said.

The President who is also the NRM party Chairman was yesterday addressing NRM youth leaders in Eastern Region comprising the sub-regions of Bugisu, Bukedi, Sebei, Busoga,Teso and Karamoja.

He was responding to demands by the youth that he continues leading them because the country values his contribution to the country and nation building. They resoundingly cheered the Kyankwanzi resolution for the President to stand for the 5th term unopposed.
true
“Now this is part of the problem especially at the level of the President to say; I want, I want. The issue is not to want but what the country needs. I welcomed the Kyankwanzi resolution in the interest of the party cohesion and also because there were rumors that there were wanters who were conducting themselves in a bad way and also using subversive ways,” he said.

The NRM National Chairman noted that those who wanted leadership in a bad way were forced by their actions to tell lies and were not truthful.

The President who appreciated the importance of interacting with the youth so as to build a strong party and country- Uganda, cautioned them against politics of indiscipline which he said is not good for the country and advised that even at constituency level, leaders should come together, discuss the needs of their area and decide amongst themselves who can best perform what task.

President Yoweri Museveni advised the youth in the country not to take politics as a career but to view it as a service to the people by diagnosing and solving their socio-economic problems.

“The problem we have is that many people want to join politics as a career. Politics is not a joke and jostling for jobs, but diagnosing and treatment of the problems people have. It is not a matter of saying ‘A bewo-abewo, but providing solutions to peoples' problems," he said.

President Museveni told the youth who were listening attentively that after the NRM restored the security of the country and implemented the minimum economic recovery programme, it embarked on deeply diagnosing and prescribing the right medicine that would get people out of poverty.

He said the medicine was contained in the 1996 manifesto of exploiting 4 acres of land at each house hold by engaging in commercial agriculture.

The President explained that the manifestos spelt out a package of income generating activities on a 4 acre land and at the backyard that would help families eradicate poverty, which was unfortunately ignored by many.

“This was our prescription that was put in writing; people took it as a joke. Now you are finding that it is not a joke. I know what you are going through. You have a degree but no job and you quarrel with the government. The NRM, especially myself, has discharged my duty to you people,” he said.

President Museveni told the youth that the lack of technical and managerial skills as well as the right qualifications was also another challenge creating un-employment and yet jobs are available.

The President cited the health sector that lacks medical Doctors and the Hydro-power sites that import labour from neighboring countries due to lack of Ugandan machine operators.

He counseled the youth to always have a correct positive attitude towards work.

“You the youth should not despise any job. Do whatever job available and get money,” he advised.

On the startup capital, the President assured the youth of the availability of funds for their economic empowerment adding that the government is to restructure some of the organizations like the NAADS to ensure that the youth benefit from the billions of funds sent to those organizations.

The meeting that was attended by Cabinet Ministers, Members of Parliament and district leaders from Mbale and the neighboring districts also witnessed the crossing to NRM of former opposition supporters to the NRM party.

Earlier President Museveni was received in style at Maluku by the Kadodi traditional entertainers.

Kyankwanzi resolutions should be tagged to more dev't, less politics