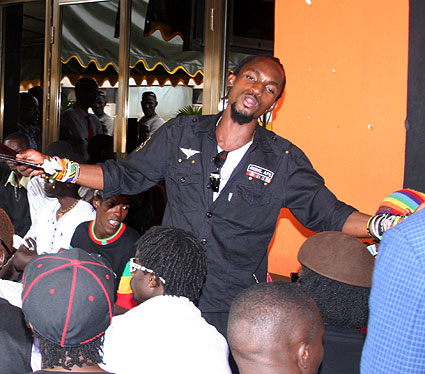 Goodlyfe’s Mowzey Radio who was at the centre of a stormy Monday morning following a bar brawl, has spoken out.

In his own words, Jeff Kiwanuka who parted ways with the singing duo of Radio and Weasel is the cause of all the chaos.

Jeff, a longtime friend and manager of Goodlyfe, according to varying accounts of what transpired Monday morning at the Kizungu mansion, was out to harm Radio when he and others vandalized the singers’ home.

For long there have been wrangles over who owns the Kizungu mansion codenamed Neverland. Stories always abound that the mansion is co-owned by Radio, Weasel and Jeff.

true
The car to the left has a shattered screen at the back. This home as a battle zone on Monday morning

Radio however says Jeff is only out to split the Goodlyfe crew and weaken them. “We fired him because of indiscipline,” Radio said of Jeff.

Following the fracas in which Radio was arrested on Tuesday, he told this reporter in an interview: “ For long I have heard stories about that house but never wanted to come out on the matter. Now let me tell you the truth. The house belongs to Radio and Weasel, the owners of Goodlyfe. Jeff does not have a single share of the house, he is just a worker.”

He wondered: “When you are fired from a job do you move with office furniture and computer?” he said referring to the Jeff who was fired as manager by Goodlyfe.

“So why is Jeff stuck in our house yet we only allocated him a room because we wanted him as a manager nearby as well as the studio so things could move faster?”

He further clarified on the arrangement: “Because we have worked with Jeff for long and he is a friend even though we fired him, we did not want to hound him out the house. We gave him time to sort himself and get a suitable place to move; but if he has taken to guerilla ways then let him leave!”

“I have instructed our lawyers Katende & Ssempebwa to take up matters instead of our fans hearing there is bloodshed,” Radio said.

The goateed singer said he will not sleep in the house again until Jeff has left in case he wants to harm him again.

When this reporter called Jeff to give his side, the struggling manager did not appear to realise he was talking to the press.

When the reporter identified himself from Bukedde, Jeff stuttered and said it was a wrong number before reverting and there was nothing to say.

Kenneth Kasagazi, a former PR manager of Goodlyfe who moved on with Jeff however refuted Radio’s allegations but put the blame squarely on failed singers Chagga (now the Goodlyfe manager), Sizzaman and Red Banton who he said are derailing him.

“Unless Radio is blind what would such failed singers advise him?” he wondered. “All we want is peace. Since misunderstandings started all we have wanted is to settle these things amicably for the good of Goodlyfe,” he said.

“We made it what it is and now everyone yearns for it; we are competing for international awards but these meat roasters (failed singers) are misadvising Radio,” Kasagazi said.

Meanwhile Katwe police boss Ibrahim Saiga says those arrested in the Monday fracas will have to report to the station on Friday. He said that the two camps on Tuesday sat together and Radio accepted responsibility for his actions and apologized.

Saiga said the cases at police to answer include number SD 48/26/05/2014 filed by producer Kagoda Bush against Radio for vandalizing his car; case number SD/31/26/05/2014 of assault filed by Kalule Moses against Jeff Kiwanuka and SD 25/26/05/2014 against Robert Kiyingi who was arrested at the Makindye mansion with counterfeit dollars.

Police summons Rabadaba over the death of fellow singer