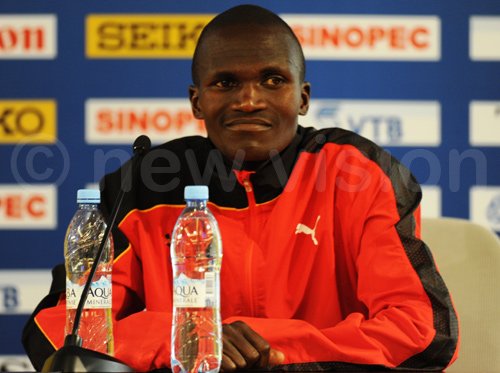 STEPHEN Kiprotich will this week come up against British star Mo Farah and world record holder Wilson Kipsang in what is being dubbed as one of the biggest marathon battles.

Kiprotich, who finished sixth in the Virgin London marathon last year, will this Saturday be making a second attempt in the same race that has like last year, assembled one of the most formidable fields ever.

“He got a visa and should leave for London by Thursday,” said Uganda Athletics Federation Secretary Beatrice Ayikoru yesterday. Kiprotich has for the past two months been training in the Kenya highlands.

London evokes nostalgic memories for Uganda. On a warm August day in 2012, this is the city where Kiprotich won Uganda’s first Olympic gold medal in 40 years.

Farah, who also hit the headlines in London, with gold in the 5000 and 10000 meters before repeating the same feat at the World Championships in Moscow last year, is upgrading to the longer races.

Kiprotich has seriously been training with some of the world’s top athletes and is determined to improve on his 2013 London performance.

“Winning again in London will be great. This is the city that put me in international headlines.

I would love to win there again,” said the Uganda Prisons officer.