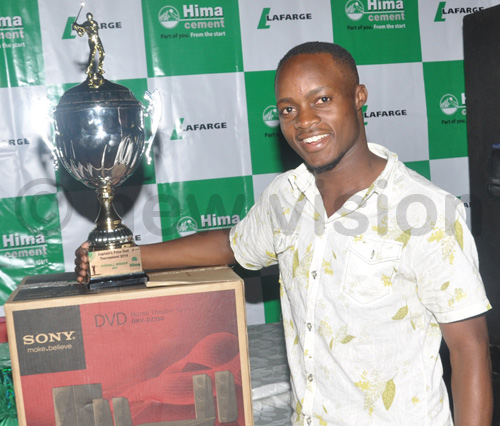 "I had a good game, I drove the ball very well today but most of all I putted very well following good approach shots," Mwanja said after picking a trophy a home theatre system for his efforts.

The women overall prize was claimed by Wei Jei who carded 67 nett to beat a strong field of lady golfers. The Chinese national was also a winner in the ladies version of the tournament last week.

Earlier on Friday Jinja based Fred Wanzala had won a sudden death play-off against Vincent Byamukama and Herman Mutaawe to win the professionals’ category. They had all tied at 70 gross to warrant the face-off.

In the play-off Wanzala squared the par 4 hole No.12 with Byamukama and Mutaawe getting a bogey and double bogey respectively to settle for second and third places.

The past captain’s trophy was won by Okullo Odom (73nett), with Charles Kareeba (76) and John Kisembo (76c/b) finishing second and third.

The Hima cement sponsored tournament that was presided over by outgoing captain Charles Katarikawe and Hima’s Daniel Pettersson attracted a record 240 amateur golfers.