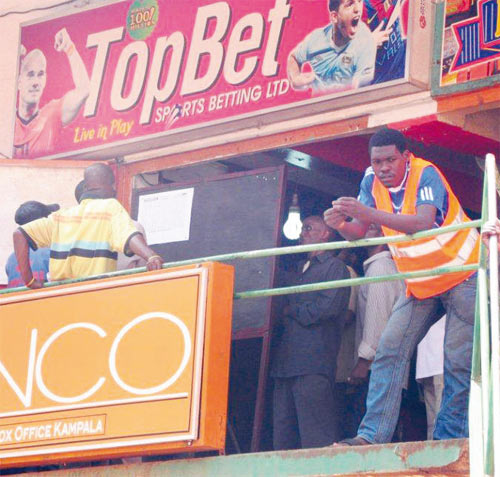 The clock has begun to tick for betting companies to put their house in order or face closure, after the Government announced tough rules. Under the new rules, no betting company will be allowed near a public facility. Their license fees have been doubled, from sh5m to sh10m. The companies will also have to deposit sh200m as a security bond with the Government. So, how will these companies survive amid the new tough rules? John Semakula, John Masaba & Brian Mayanja explore.

Nearly all betting centres in Kampala city will close when the Government implements a new policy that requires them to be 200 metres away from public facilities. The National Lotteries Board (NLB) last week issued fresh regulations aimed at streamlining gambling, in which location was underscored.

According to the guidelines, from January 1, 2014, casinos and gaming houses will not be allowed to operate less than 200 metres from churches, markets, mosques and government offices. Two hundred metres is about the length of two football pitches. NBL wants betting companies located outside towns such that they do not lure the public into their activities.

The new regulations also require operators to deposit a sh200m security bond for paying anyone denied payment. Agents are also required to pay sh10m in annual licences. James Mpiirwe, the acting NLB board secretary, told Saturday Vision that businesses which do not comply will be closed.

“In the short run, the closure will affect our tax base, but we shall achieve our goal in the long run,” Mpiirwe said. He added that NLB would carry out operations against non-compliance after January 1, and those who did not comply would be denied licences. But managers of betting companies say complying with the new rules, especially the one on relocation, may be difficult.


Betting companies react John Ejalu (left), the chairperson of the Sports Betting Association of Uganda, an umbrella body which brings together sports betting companies, welcomed the new rules, but said some of the betting companies may find it difficult to do business. “The rules have just been released. We are studying them to see if they bode well with the realities on the ground,” Ejalu said, adding: “In case they are not, we will consider asking the Government for concessions.” He said the sh200m security bond may not be a problem for betting companies because it would be considered as an investment and would remain intact for as long as the company abides by the rules.

However, Ejalu noted, the increase in licence fees, from sh5m to sh10m, was a big challenge. “While the fee is manageable for promoters, it may be a hindrance to the agents who run most of the centres,” he said. Promoters allow smaller players (agents) to operate under their franchise in return for commission.

Many youth are addicted to betting

According to Mpiirwe, in the last financial year, casinos and gaming companies brought sh8b into the national coffers and are expected to fetch sh12b this financial year. “Whereas some people want betting companies and casinos banned, they are legal entities with benefits to the country. The public only needs to be sensitised on how to go about this business,” he said. The Government raises money from the sector through licences. It also taxes the companies 20% of the total funds realised, after paying off the winners.

Saturday Vision conducted a survey where some gamblers said they wanted the Government to ban gambling, instead of relocating the business. They said the business had milked them and made them poor. Joseph Kyangulanyi, a resident of Kireka, a Kampala suburb, told Saturday Vision that before he started betting four years ago, he ran a successful garments business with sh500,000 capital.

He, however, lost all the money to gambling, which has turned him into a pauper. “I cannot give up gambling because it is now part of my life. Every coin I get, I spend on betting. I am poor and everyone in my family has abandoned me. We want the Government to ban gambling to save us,” Kyagulanyi said.

Brian Nsubuga, 25, of Bweyogerere in Wakiso district, said over the last six years, he has been betting an average of sh1,000 a day, but he has nothing to show for it. “We want the Government to increase the betting fee to a minimum of sh50,000 such that it excludes us the poor.

Otherwise, we are dying of exploitation by the owners of these businesses,” Nsubuga said. He added that relocating betting businesses outside Kampala would not help because it would introduce the habit to other innocent people, yet that would not also stop gamblers from going there. When Kampala Capital City Authority (KCCA ) ordered vendors off the streets of Kampala, Richard Ssengendo, 30, lost his only source of income.

Ssengendo would travel to Nairobi, Kenya, twice a week to import merchandise, which he sold on the streets. After being sent off the streets, he resorted to sports betting, which he says has turned him into a pauper. “When I have no money, I do not gamble, but as soon as I get it, I rush to bet,” Ssengendo said, adding, “betting only benefits the owners of the companies. “You can’t imagine staking sh10,000 on 12 games and when one loses, the ‘Asian’ takes it all.” He wants the Government to make sports betting an online business, to make it inaccessible to idle youth.

true
Clients betting online at one of the outlets in Kampala

You cannot reap where you did not sow — counsellor

Steven Langa, a counsellor at Family Life Network, says gambling thrives on greed because the victims want to reap from where they have not sown. “But the principle of reaping from where one has not sown does not work in life. The right principle is everyone must sweat in order to reap,” Langa said. He added that those who are addicted to betting should beware that it is not just a habit.

“A habit can come and go, but an addict cannot live without doing what he is addicted to. But we were created to be the masters of everything and not to be mastered. When we are mastered by things like sports betting, our lives are destroyed. We all get tempted, but it is important that we control our lives and not succumb to it.” He urged the Government to ban gambling, saying the damage it is inflicting on the population defeats the financial argument that is keeping it alive. “Many countries have banned sports betting and the move has served the purpose of the day.

If Uganda does not ban it soon, the crime rate in the country will skyrocket. An addict who has spent everything on gambling will resort to criminal activity, like robbery, to survive. That is not the Uganda we want to live in,” Langa warned

true
Betting on the streets. Photos by Stephen Mayamba

Betting centres located in public places
A survey conducted by Saturday Vision around Kampala and its suburbs, revealed that most of the casinos and gaming companies will have to relocate because they are near public facilities.

According to Ssembajwe, if the new guidelines are enforced, pupils in his school will be able to concentrate on their studies. “It is a big distraction to some of our pupils, especially the big boys in upper classes. Even when the Government cautioned the betting companies against allowing young people into the centres, many of them did not comply,” he said. Senoga added that although the new rules would help, the best option would be to reduce the number of days and working hours of betting companies. “We are looking not only at children, but also adults who spend days at betting centres doing nothing. Instead of making it a pastime as is the case in the West, people here have turned betting into a full-time job,” he said.

In Wandegeya, another city suburb, almost all sports betting centre will have to close come January 1, due to their proximity to public places. Affected companies include Kings Sports betting, Top Sports and Victory Betting. Kings Sports betting is a block away from St. Peters sub-parish church Wandegeya, while Victory Betting is just across the church. Others are Royal Sports, Top Betting and Star Betting, which will have to close due to its close proximity to Wandegeya Mosque, as well as the newly refurbished Wandegeya Market. Kings Sports Betting, near Watoto Church on Bombo Road, also faces closure.

Wolf Sports Betting in Kireka town is found on the same building as the National Social Security Fund offices. A person, whose pension benefits have been approved, may, out of excitement, walk to the next floor to bet. In the vicinity is a dental clinic, while Kireka Police Station is within a hundred metres’ range

.If the Government enforced the new rules, Wolf Betting Company would automatically have to relocate. But Amina Ismael, the manager, said they would lose clients if they moved to another area. “Our clients are illiterate. They cannot conduct business online, so we shall lose some,” Ismael said.

Gaming International, Mukono Branch, which is a popular place for the youth, especially on Saturdays and Sundays, will have to relocate. The business is located 100 metres from the International Medical Centre and Namirembe Hospital.

By lunch time on Tuesday, when Saturday Vision visited the areas, the betting centres were packed to capacity. Ronald Mukiibi, one of the employees at Premier Betting Ltd, slammed the plans to relocate their offices outside town. “What guarantee does the Government have that when we relocate, those addicted to betting will not come looking for us?” he asked.

One of the managers of Sports Betting Ltd in Kisaasi, who preferred anonymity, said it would be hard for the Government to implement the new regulations since some government officials own gaming centres. Gemex Sports, Top Betting and Game International in Ntinda are all operating a few metres away from a mosque and Grace Christian Centre.

Gambling around the world

Betting on football has steadily been growing. It is a big industry, which is worth around 0.6% of world trade. Betting has been associated with match fixing, much of which has been reported in Asia. Match fixing is a dishonest activity carried out to ensure that team win particular sports matches. International crime investigation body Interpol has carried out more than 2,300 raids on properties worldwide as part of its drive to disrupt match fixers.

There is a ban on sports betting in some countries, while elsewhere illegal betting syndicates offer better odds, making the potential winnings more attractive. Laws vary in different countries. In Singapore, it is legal to place a bet on a football match and online sports betting is banned.

Aside from the concerns over matchfixing, there are other financial issues associated with illegal betting, including transactions that are unaccounted for, costing governments hundreds of millions in lost tax revenue, while they also damage the profits of legal bookmakers.

Why betting has increased
The growth of the internet and mobile devices with quick access to odds has made betting much more accessible. Satellite television channels and increased coverage of live football matches around the world has increased interest and opportunity.
BBC