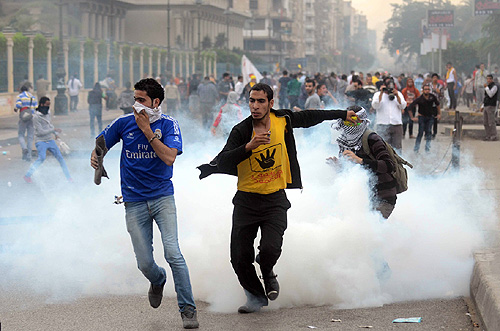 CAIRO - A 10-year-old boy was shot dead on Friday near the scene of clashes between supporters and opponents of deposed Islamist president Mohamed Mursi in Egypt's northern city of Suez, security and medical sources said.

In Cairo, a 21-year-old man died after being shot in the chest during clashes between pro- and anti-Mursi protesters, and across the country another 14 people were injured in confrontations, the head of the ambulance authority told the state newspaper al-Ahram.

Mursi's supporters have staged frequent protests across Egypt, many of them after Friday prayers, since the army deposed him on July 3 in response to mass protests against his rule.

They have arrested most of the top leaders of his Muslim Brotherhood, accusing them of fomenting violence or terrorism.

In a statement, the Interior Ministry accused the Brotherhood on Friday of trying to prolong instability in Egypt, and said security forces were doing their best to protect property and maintain security.

The Brotherhood says it is opposed to violence, and that such allegations are a pretext for its suppression.

In the central Awel-el-soor neighbourhood of Suez, around 500 supporters of Mursi gathered and chanted slogans against the army and police. Clashes broke out with opponents of Mursi and rocks were thrown and shots exchanged, witnesses said.

The boy, Samir El-Gamal, was hit by a stray bullet in the back of the head while walking with his mother near the clashes, the sources said. His mother was unharmed, but the boy died on the spot.

Members of Mursi's Muslim Brotherhood accused the security forces of using live rounds to disperse their protest, residents of Suez said. Police said the bullets had come from the opponents of the protesters, not from security forces.

The child's family accused the Brotherhood of responsibility for their child's death, the state news agency MENA said.

The interim government installed in July has promised a return to democratic rule next year, under a new constitution.

For now, the political turmoil that has gripped Egypt since the overthrow of Hosni Mubarak in early 2011 continues to undermine both stability and economic growth.

Elsewhere in Cairo, hundreds of pro-Brotherhood protesters tried to force their way into the embassy of the United Arab Emirates and attacked its guards, but police used teargas to disperse them, the state newspaper al-Ahram said.

Since Mursi was deposed, the UAE and other Gulf Arab allies have shown strong support to the interim government, pledging billions of dollars to help shore up Egypt's fragile finances.

In the Nozha area of central Cairo, pro-Mursi protesters threw petrol bombs at two carriages of a tram, but police put out the fire, security sources and MENA said.